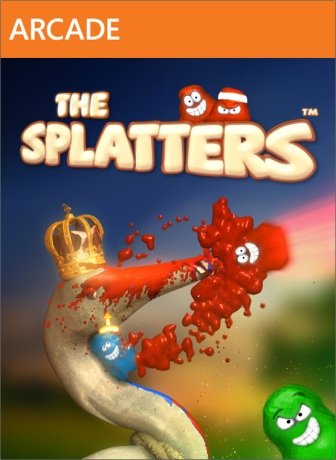 The Xbox Live Arcade has diversified its offering of casual puzzlers since its inception, adding everything from sudoku, chess, card games, and the bizarre yet wholly addictive budget titles that can’t really be categorized. That’s where The Splatters fits in. It’s a colorful, wacky time that takes some obvious cues from a menagerie of iOS games and puts a new spin on them. If you’ve ever wanted to take control of exploding jelly (who hasn’t?) now’s your chance.

That’s exactly what you do with The Splatters – aim to make each and every one of the gelatinous blobs on-screen explode, whether that means raining down jelly fire on the tiny bundles of tapioca, running straight into them, or planning a strategic attack via usage of an Angry Birds-like “aftertouch” mechanic. While there are plenty of globules placed around each enclosed level (usually you’re playing within a small space), you have a limited amount of jelly kamikazes and rules in place to ensure you stay on your toes.

Once your playable jelly collides with another, a rush of liquid is released — and you can’t control where it goes or what it touches. To get this to happen, you need to “pop” the gel bubbles, as it were, with enough force to ensure the hit registers. Simply tapping the edge of a blob won’t make it explode. You need to hit it with force intended to kill, or else the rush of water will languish in one of the 30 levels’ many cul-de-sacs, useless to all. Once you launch your blob, you haven’t got a choice where the adorable weapon will explode, so as the challenge lies in Angry Birds and Pee Monkey, Flower Bloom (both comparable iOS titles).

The hit detection can be a little frustrating, as many times you’ll assume there was more than enough power behind particular shots to enact more than one explosion, so accuracy is key. Once you’ve gotten into the groove of things, you’ll be slingshotting through level after level, greedily paging through this clever physics-based puzzler. Special attacks such as the air bomb, and the ability to alter the path your blob takes mid-air are a boon to your progress, and should keep you placing on the leaderboards time and time again — especially when you find that you’ve mastered the finicky art of stringing along effective combos of precision, speed, and luck.

Fast, frenetic, and offbeat humor as well as an extensive color palette and energetic tunes accompany quick-hit stages that’ll have you coming back for more for weeks after completing the unfortunately short campaign. Leaderboards ensure you stay abreast of the competition, and are a great reason to revisit stages you previously thought you mastered, but quickly found otherwise. For $10 you’ve got a full-fledged, unique puzzler that wouldn’t be out of place on the iPad or Android tablets you’ve probably got lying around the house, and now you can bring that same type of experience to your console. Ready, aim, fire!

Fast, frenetic, and offbeat humor as well as an extensive color palette and energetic tunes accompany quick-hit stages that’ll have you coming back for more for weeks after completing the unfortunately short campaign.
REVIEW SCORE
8
File Under: Arcade, Microsoft, Xbox