Getting hands-on time with the Nintendo Switch wasn’t easy at PAX East 2017. Following shortly after the Switch’s release on March 3, 2017,  convention goers were interested in sampling the Switch for themselves, figuring out whether it worth putting down a $300 investment on the console. Lines were long to enter, but for Splatoon fans, the wait was worth it: Nintendo demoed Splatoon 2 at PAX East, way ahead of the game’s projected summer release, and for fans of the original Splatoon, there’s plenty of good news in store. The game is essentially an upgraded version of the game we know and love.

During the PAX East demo, play included a training segment similar to the tutorial at the beginning of the original Splatoon, followed by a local play match of “Turf War” between eight players. All matches were hosted locally — each player used a Switch console of their own, with two Joy-Con attached to the tablet.

The demo allowed players to choose from four different weapon load outs, which were largely based on the Shooters, Blasters, and Rollers class set-up in the original. One new weapon on hand was the Splat Dualies: an akimbo pistol setup. The choice feels right at home in the Splatoon franchise and works well as a sister class to Blasters.

Splatoon 2 plays and feels a lot like the original Splatoon, and that’s not a bad thing. Players use the gyroscope and right thumbstick to aim, with the right flapper to fire and the left flapper to swim across ink. Turf War plays just like its Wii U counterpart too, as players race against the clock to paint the map with their team’s ink, duelling with other Inklings along the way.

The transition from Wii U to Nintendo Switch is relatively smooth. The Switch’s gyroscope feels and performs very similarly to the Nintendo Wii U GamePad, which means most players’ aiming skills will carry over from the first game to the second. Local play’s multiplayer was practically seamless, too, with no connection issues during the two matches previewed. And the Nintendo Switch’s portability certainly wasn’t a problem, either: the Nintendo Switch console works perfectly fine in tablet mode with Splatoon 2. Yes, Switch owners really can take Splatoon 2 on the road and play together in the classroom or on a train within reason, of course.

But Splatoon 2 certainly shares in some of the Nintendo Switch’s problems. While the portable Switch setup works well, it’s not quite as smooth as the original Splatoon‘s hybrid TV and GamePad setup, which used the GamePad as a minimap and spawn point setup. Players could take a momentary glance at their tablet screen while planning out their course of action on the TV, all without compromising their line-of-sight in-game. In comparison, relying on a single screen for both onscreen action, minimap, and spawning was a step down from the GamePad’s flexibility. 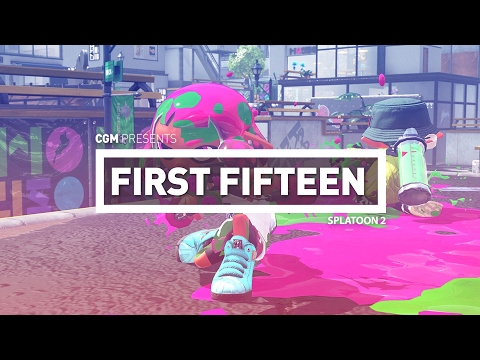