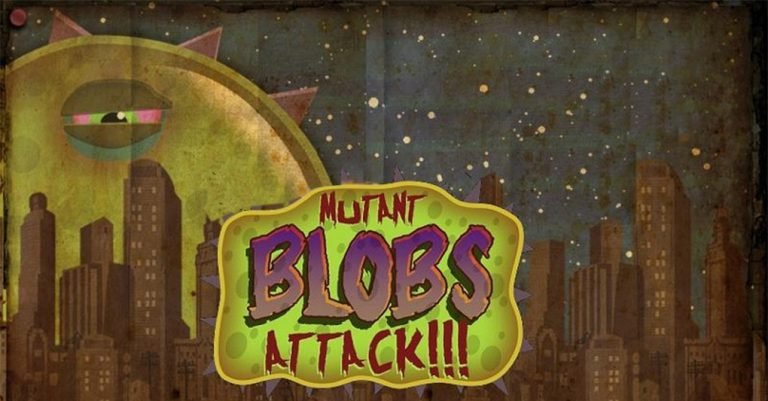 Tales from Space: Mutant Blobs Attack has the interesting distinction of combining the quirky sensibilities of Katamari Damacy with elements of the adorable puzzler Loco Roco tossed in for good measure. Arguably one of the most original concepts to aid in the grand unveiling of the PlayStation Vita, this frenetic puzzler from indie developer DrinkBox Studios is one to watch, and certainly one of the Vita’s standout launch hits. This quirky budget title is a loving homage to campy ’50s sci-fi and all things impeccably cute. And most importantly? It’s a blast.

As an adorable, neon-colored blob, it’s your job to roll through each area, rolling up items ranging from small to large, infiltrating everywhere from podunk towns to the moon. Like Gremlins, through gobbling up any type of food, the blobs grow ever-larger, until ultimately they’ve grown to gargantuan size. From humble beginnings to the size of a small rodent, you’ll guide your blob through 25 levels with the goal of eventually consuming everything on our planet. And as the game’s lighthearted tale (despite you know, the blobs’ evil intentions) unfolds with hilarious nods to pop culture, ludicrous character archetypes, and plenty of fun.

Rather than the 3D environments of Katamari Damacy, Mutant Blobs Attack is squeezed into that of a 2D plane. While searching each area for objects that may be consumed, you make use of your blob’s wide arsenal of abilities. Magnetic waves that allow the blob to attract or repel itself when confronted with magnetized objects, kinesis with which the blob can manipulate objects scattered throughout the environment, and other gameplay elements are at your disposal, and each area makes brilliant use of each. For example, using the magnetic wave to navigate some truly sticky situations is a fantastic example of great game design, and certainly something bigger studios could take a lesson from.

Collecting objects for consumption, evading the inhabitants of Earth who aren’t too keen on your blob’s plans to devour everything, and navigating cramped spaces are just a few of the instances in which your wits and gaming skills will be tested. But despite tough-to-nail sequences and instances of pure frustration, an unlimited supply of extra lives and generous sprinkling of continues are a great reason to soldier on, if only to see what types of obstacles and items you’ll be gobbling up next.

Optional sections optimized for motion controls based on usage of the Vita’s accelerometer are the only areas where Mutant Blobs Attack stumbles, as they simply do not feel nearly as tight as if you were relying on the typical analog stick and face buttons. It’s a common complaint with devices that rely on multiple types of control, but luckily these diversions are optional.

In terms of ensuring the game never takes itself too seriously, the game is full of meme-related signs and other commentary, such as a billboard that advertises “Hipster Juice” and other tongue-in-cheek references that any player who spends quite a bit of time on the internet should glean a chuckle or two from. A breezy soundtrack and bright, visceral graphics add much to the retro-feel, and everything works together quite well to ensure a lighthearted, funny adventure is presented rather than something that quickly runs over into serious territory.

Mutant Blobs Attack is one of your best bets when looking for a new addition to your Vita library, especially considering the games it borrows from and its budget price of $7.99. The King of All Cosmos would be proud. The Vita has a dazzling future ahead of it if continued PlayStation Network releases follow in its vein.

Tales from Space: Mutant Blobs Attack has the interesting distinction of combining the quirky sensibilities of Katamari Damacy with elements of the adorable puzzler Loco Roco tossed in for good measure.
REVIEW SCORE
8
File Under: PlayStation