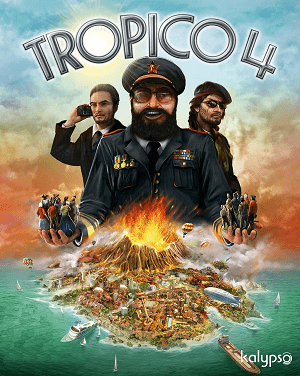 Viva la Isla de Tropico! Congratulations, El Presidente, you’ve been re-elected. As the leader of the banana republic known as Tropico, it is up to you to build your island empire into a tropical utopia. While maintaining basic living conditions for the residents of your island you’ll also have to contend with the various political factions on the island, as well as keeping the international superpowers happy, less you find Tropico surrounded by warships.

You may not have guessed it, but unlike the previous games in this series, Tropico 4 actually features a story this time around. You play as El Presidente, a dictator who wants to bring peace, civility, and profit to the small nations of the Caribbean. The story I speak of is played out across the game’s 20 missions. Each mission will task you with working your island and its populace in different ways. Some missions will have you focus on generating tourism income, or mining various metals and materials from the fertile island soil. Others may have you playing international politics or perhaps dealing with those oh-so-troublesome rebels. This mission structure and the sheer variety of tasks is Tropico 4’s greatest improvement over Tropico 3. At its core, Tropico 4 is a caricature of global politics during the cold war. In Tropico 3, you simply balanced relations with the US and USSR, but in Tropico 4 there are a few more superpowers to keep happy. In addition to the previous two, you’ll also square off with the Middle East, China and European superpowers—and if that’s not enough of a balancing act, domestic politics has an additional eight factions for you to keep happy (or at the very least prevent from becoming rebels). These factions and superpowers are what drive the game’s missions. From time to time various representatives of each faction will approach you with a task that will either move their agenda forward or benefit all Tropicans. For example: El Diablo, leader of the Nationalist faction, is always complaining about immigration, especially if native Tropicans can’t find a job. To rectify this, El Diablo may suggest building an Immigration Office and changing your immigration policy to something a little less friendly sounding than “Open Doors”. These side quests do a great job of keeping you busy while waiting for another main task to appear. Additionally, completing these side tasks will help to keep your treasury full, and your people happy and fed.

However, not everything in Tropico 4 is under your control. Constant vigilance against the epic forces of nature must be upheld. You can have yourself a nice little slice of island paradise, but all the diplomacy in the world can’t protect you from the fury that is Mother Nature. In addition to earthquakes, droughts, and the odd active volcano, coastal cities can fall victim to massive tsunamis, while those built further inland will be at the mercy of those sneaky tornadoes. Try as they might, your army never seems to be prepared for these assaults, especially when four show up at once. All you can do is sit back, watch the destruction, and allow nature to take its course.

Graphically, Tropico 4 is hardly anything to write home about; most of the visuals are about the same as they were in Tropico 3, but the added cut scenes and disaster movies add at least some semblance of artistic improvement. The audio is equally at par. The radio chatter is funny and  full of helpful commentary. This commentary comes from Sunny, the radio host and leader of the Environmentalist faction and her frequent guest Penultimo, El Presidente’s most trusted and loyal adviser. The best part is that the commentary is somewhat dynamic. Sunny and Penultimo will always  focus their questions and discussions on the latest happenings around the island. Penultimo’s constant appreciation for my glorious rule as El Presidente and Sunny’s skill at pointing out the short comings of my regime keep the game light and different with each play through. The music, on the other hand, is quite a different story. The tunes that are present are great, and fun to listen to at least the first few times. However, after about ten missions, each lasting about three to five hours a piece, the island rhythms coming across the airwaves of Radio Free Tropico simply get too repetitive.

Tropico 4‘s greatest strength lies in its core gameplay. Not only is it fun to try and create the best society possible, it’s also quite fun to deal with the various disasters, natural or otherwise (such as mass protests, strikes by the workers, and assaults by those pesky rebels). As a dictator you have several anti-subversion tools at your disposal, though. Secret Police, Edicts, and even good old-fashioned military might are just a few of the tools that can be used to quietly silence, arrest, or re-educate the population. These will go a long way when dealing with the rebel threat. However, the best way to take on the rebels is make sure no one becomes a rebel in the first place. This is done by increasing the overall happiness of your people. I would love to tell you that this is an easy task, but unfortunately that isn’t the case. I found keeping the population happy to be one of the most difficult aspects of managing your island. Much like in the real world, lots of people are content, but few are truly happy. But, like I said, if keeping people happy isn’t your forte, then there are plenty of other fun tools at your disposal.

Tropico 4 represents the Tropico series at its finest. What I mean is that Tropico 4 is developer Haemimont Games nailing Tropico. The folks at Haemimont Games seem to have taken an “If it ain’t, broke don’t fix it.” philosophy and applied it to the series. This is forgivable, and while there are some improvements, Tropico 4 is hardly a revolutionary game. Yes, it is one of the finest civic management simulations on the market and is great for people who find games like Sid Meier’s Civilization series daunting, but I see a lot of iteration and not nearly enough innovation. Tropico 4 breaks everything down into nice digestible chunks during the campaign to keep players from being overwhelmed. It also satisfies those ambitious gamers who may be looking for something with a larger scope with its sandbox mode. The graphics and art are competent and polished, but hardly eyeball melting. Another new feature is Facebook and Twitter integration, but I tend to ignore these features no matter what game I’m playing.

I really enjoyed my time with Tropico 4 mostly because of the gameplay. It’s a well-balanced simulation that constantly has you doing more than just balancing unemployment like most civic management games, and it provides a certain level of accessibility not found in most games that share its genre. The game also has some delightfully tongue-in-cheek writing to drive home the parody element of its theme and atmosphere. If you have never played a Tropico game before, then buy Tropico 4–it’s arguably the best of the series.

You may not have guessed it, but unlike the previous games in this series, Tropico 4 actually features a story this time around.
REVIEW SCORE
8
File Under: MMO, PC, Strategy, Tropico