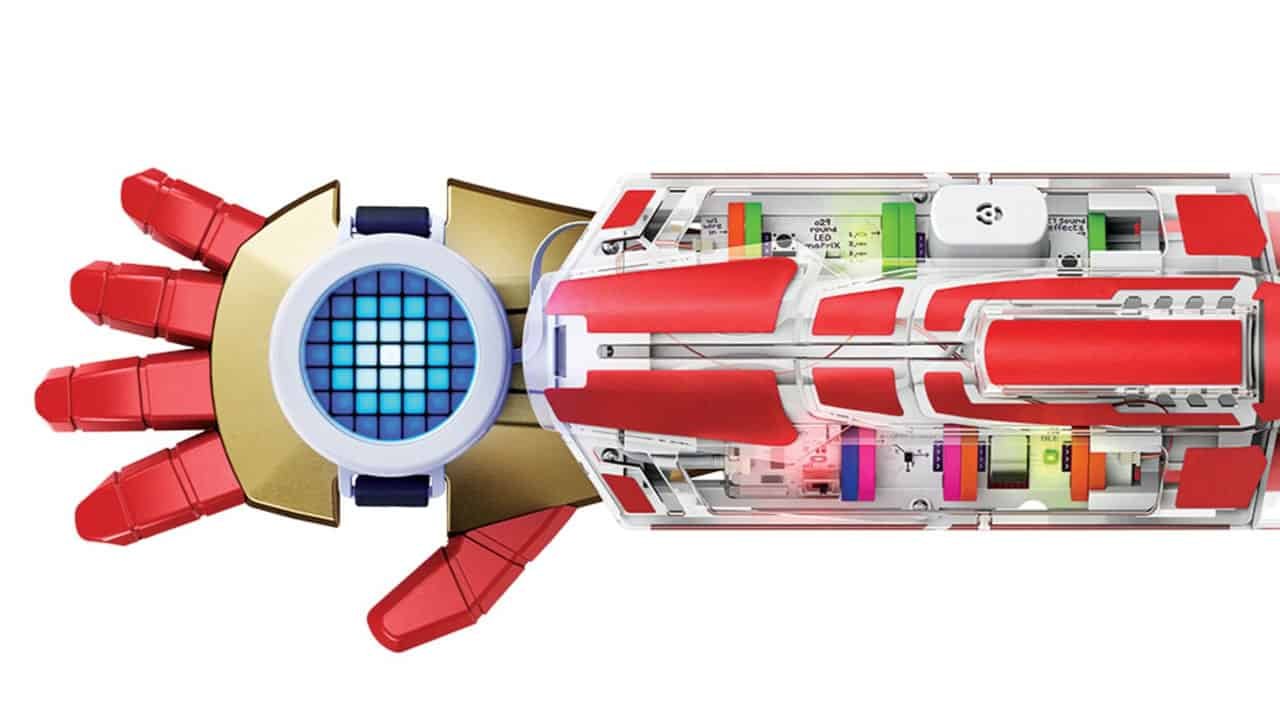 With the prevalence and rise in popularity of smart devices, especially in the younger demographic, it’s no surprise that toy manufacturers have embraced mobile platforms that work in tandem with equally smart toys.

Another key area that has garnered the interest and imagination of young people (and adults alike) is Marvel comics, specifically The Avengers, thanks to the fantastically realized cinematic universe. This is why it’s no surprise, that LittleBits has taken the iconic Avengers property and brought it to life, with their Hero Inventor Gauntlet kit, a smart wearable toy and prop, aimed at the inquisitive mind of children.

Inside the box, the Hero Inventor Gauntlet kit consists of the gauntlet base, cover, arm stand, LED matrix (reminiscent of Ironman’s fusion core), cover, stickers for the base, a 9V battery and finally, 9 modular electronic circuit boards or chips.  The premise of the gauntlet itself is two-fold: kids can simply stick in the LED to either side of the arm stand, meaning the palm or back of the hand, put on some stickers and have a rather cool looking, albeit kid-sized display piece, or actually don the gauntlet, partaking in engaging games and exercises when paired with a smart device.

The gauntlet truly comes to life when paired with a phone or tablet, thanks to a Bluetooth module and the Hero Inventor app (which can be downloaded on both the Apple App Store and the Android Google Play Marketplace).  The app also acts as a nice introduction with detailed, yet easy-to-follow illustrations and instructions, tasking kids to explore the various modular circuits that use magnets to actually bridge together and form more complex formations. Once assembled, a transparent cover can be put into the gauntlet base, making it possible to see the brightly coloured and futuristic aesthetics of the pieces inside.

When paired for the first time, the app will prompt kids with the opportunity to actually customize the LED matrix grid, with a simple but effective pixel editor. Completing each individual task that the app asks for, unlocks additional activities, none of which ever feel too difficult but still manage to encourage kids to really get involved and participate with the toy.

Activities within the app are structured as missions given to the player by popular Marvel characters, including characters beyond just Ironman, such as Antman (and The Wasp), The Hulk, Black Panther and even newer characters, such as Ironheart. The included stickers for the arm include colours reminiscent of some of the aforementioned heroes, ultimately Littlebits has done an admirable job in making the gauntlet feel inclusive.

The 9 individual modular and magnetic circuits all feel extremely durable and well-made, while also being intuitive and easy to put together and take apart, in other words, perfect for young children to play with.  Some of the other activities or games included within the app, task users to create specific module arrangements that essentially reprogram the gauntlet, or rather the LED matrix to behave accordingly to the specific game.  One cool activity, in particular, allows kids to actually create a simple two-frame animation with the in-app pixel editor, which then translates to the LED on the gauntlet. Other games also take advantage of these custom patterns while introducing other elements such as sound and motion, or gesture-based control.

The Hero Inventor Gauntlet set is not a cheap piece of kit, coming in at $200 CDN while also requiring the use of a smart device, the price point may bar entry for many, however, parents willing to shell out the cash can rest assured, knowing that what they are purchasing is a high quality and engaging toy.

With over a dozen simple but rewarding activities for kids, the Hero Inventor Gauntlet offers a real feeling of accomplishment and tactility that excels in bringing together traditional playtime with the nuances of educational software and digital games, in one concise, Marvel themed package.