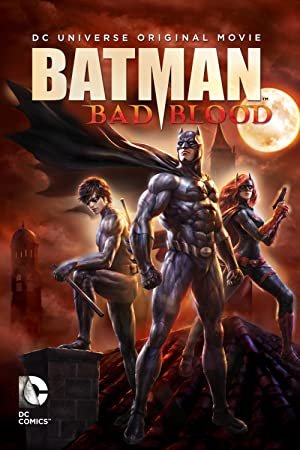 I’ve been pretty conflicted about Warner Brothers Animation’s recent string of Batman adventures. On the one hand, they’ve loosely adapted one of my all time favourite Batman runs: Grant Morrison’s epic 7-year Bat-journey that attempted to deconstruct and revive every era in the character’s history. As expected from Morrison, the sprawling narrative was complex and serpentine, not exactly the type of story that fit the direct-to-DVD action romps that Warner Brothers Animation favors for their DC properties.

So, the powers that be essentially dropped all of the complex and deep-cut strands of Morrison’s story to focus entirely on the Damian Wayne/Bat family arc. Fair enough, there’s some good stuff there. The trouble is that these adaptations have been paper thin so far, essentially taking the simplest elements of Damian’s tale and little else. Batman: Bad Blood takes my favourite arc of Morrison’s grand Bat-Odyssey and transforms it into a 72-minute fight n’ cameo fest designed for electric guitar stings. It’s fun, but disposable. God-willing it’ll be the end of this era of DC animated Bat-features, because it hasn’t been the best.

Things kick off with a big ‘ol battle between Batman and a gang of D-level villains not even worth mentioning. Batwoman makes her debut in the fight, so cue some one-liners between the two bats. Then it all ends in an explosion that Batman doesn’t appear to escape from (oh no!). With Bruce Wayne out of the picture, Dick Grayson picks up the Batmantle and fights alongside a wise-crackin’ Damian Wayne who can’t believe Dick thinks he can replace Bruce. Faux Bats also starts chasing down Batwoman, so that we can learn her tragic origin story and why she enjoys using guns.

From there, Damian is kidnapped and we learn that Talia Al Ghul was actually beyond all this wacky action, having kidnapped Bruce as part of her long term goal of making an army of Bat-clones (that’s what Damian was kiddies!). Plus she’s also involved in a mind-control plot with the Madhatter. Eventually that means that Bruce is briefly transformed into an Batman, requiring Nightwing, Robin, and Batwoman to form a Bat-family to stop it.Not sure what this means Luke Fox (Lucius Fox’s son) becomes Batwing to add an additional Batfamily member. Why? I don’t know. Cross-promotion, I guess.

So, as you may have gathered by now that’s a hell of a lot of plot to cover in a 72-minute movie. Well, it’s made worse by the fact that there’s an action scene at least every 5-10 minutes. There’s even less time for exposition as a trim 70 minute feature would normally allow, making all of the storytelling clunky and uncomfortably rushed. Batwoman fares best, with the intriguingly dark Kate Kane origin story covered well in its brief appearance.

Batwing could not feel more tacked on and is little more than a distraction whenever he pops up. Sadly the Dick-Batman/Damian Wayne relationship is nowhere near as entertaining as it was in Grant Morrison’s comics, which played like Adam West’s Batman on acid. There’s too little screen time to develop their unique dynamic and the DC Animation house style doesn’t allow for Morrison’s surreal digressions to play a role. I was pleased to see Tali Al Ghul’s twisted plot from Morrison’s arc make an appearance, but sadly it isn’t developed properly either and the filmmakers cop out and dodge the tragic ending that it should have been building towards.

Batman: Bad Blood is a muddled movie to say the least. The folks in charge of the DC Animated Universe clearly couldn’t decide on which story to tell, and trying to tell four or five didn’t provide satisfactory versions of any of them. Beyond a few token efforts at depth—like Dick Grayson painfully recalling what it was like to grow up in Bruce’s shadow—the movie avoids all psychological complexity in favour of cramming in as much Bat action as possible.

“Batman: Bad Blood does at least look and sound fantastic on Blu-ray. “

Thankfully, the film is at least directed by Jay Oliva, who is a master of animated Bat action, so each and every one of the endless action scenes has style to spare. They are fun to watch, no doubt about it. Unfortunately, without much in the way of narrative or characterization to match all of the punch-punch, boom-boom these sequences don’t have the same impact as the incredible work Oliva delivered in The Dark Knight Returns that made him the go-to house director for these direct-to-DVD features. It’s all empty spectacle, but on the plus side it is a fun and amazingly animated empty spectacle. So that’s something.

Despite ending on a sequel-baiting character introduction, I hope this is the end to the current run of DC Animation Batman flicks. Ever since Son Of Batman there has been a visible struggle to define the tone and purpose of these animated features. Thankfully, the movie doesn’t cram in needless fan pandering like the Court Of Owls plot in the last movie (which was there only in an attempt to win back disappointed viewers after Son Of Batman, only to disappoint them further by not doing it properly). Nor is the movie as irritatingly adolescent in its Bat-brah writing as the last two features (although there are some awkward moments like Dick calling Alfred a “total badass”).

Bad Blood is probably the best of the last few connected Batflicks, but only because the filmmakers recognized that the action sequences were the best part so they focused almost entirely on those. There’s no denying the fights are beautifully staged and the movie is worth watching just for them. It’s a shame that all the DC Animation team delivered this time, given the depth and potential of Batman’s Universe.

Batman: Bad Blood does at least look and sound fantastic on Blu-ray. The team cranking out these DC animated features are supremely talented and the production values are impressive. It’s nice to have 2D superhero animation done this well, even when the scripts disappoint. Amusingly, even the special features seem to admit the movie is a one-trick pony grudgingly. Usually these discs are filled with featurettes full of DC Comics luminaries discussing the history of Batman and how the film adds to the legacy.

This time the biggest feature is a 30-minute documentary dedicated entirely to Jay Oliva’s action sequences. It’s interesting, but it’s amusing that it’s the only thing that the filmmakers have to say about this lacklustre effort. Next up is a 13-minute doc about all the members of the Bat-family that covers the basics of their origins and appeal with little depth. Finally, we get a couple episodes of Batman: The Brave And The Bold that are fun, but so tonally different from the main feature that they feel somewhat out of place.

Batman: Bad Blood does at least look and sound fantastic on Blu-ray. The team cranking out these DC animated features are supremely talented and the production values are impressive.
REVIEW SCORE
6.5
File Under: Batman, Bruce Wayne, Nightwing, Robin