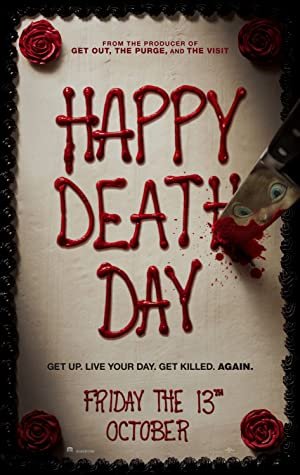 If you want to make a slasher movie knock-off of Groundhog Day, that’s fine. However, play pretend that your movie is so witty throughout and then deliver a finale so idiotic it forces anyone who cares about the logic of your premise to storm out fuming and we’ve got a problem. Happy Death Day could easily be dismissed purely because of its bonehead title and blatantly ripping off “Groundhog Day” with a masked killer premise. However, the fact that the commercial rip-off premise is also so smug about its intelligence and breaks so many of its own rules to deliver such a stupid finale makes it all extra irritating. Toss in the fact that this flick has been marketed to death in the hopes of forcing a new seasonal horror franchise budget and you’ve got something destined to piss off anyone who actually cares about horror movies as it cruises to box office glory. This is the new Ouija—a blown opportunity—only this time it’s too busy telling audiences how smart it is to even succeed at being stupid.

Jessica Rothe stars as a jerk of a sorority girl so awful and self-serving that she can only possibly be saved by a supernatural life lesson. So she gets one. More specifically, she gets Bill Murray’s lesson and becomes stuck in a time loop. The catch is that at the end of that time loop, she’s killed by a baby-masked killer on her birthday. Boo-hoo. So, we trudge through the Groundhog Day repeating routine for a while, so familiar that it now feels like we’re in our own nightmare of repetition every time this nonsense starts. Eventually, she decides to give the nerdy nice guy (Israel Broussard) in her repeat b-day a shot. He suggests finding the killer in her life. That leads to the movie’s one amusing montage of Looney Tunes slapstick deaths as Rothe fails to name her killer. Once that’s over Happy Death Day gets serious in its self-improvement messaging, insultingly idiotic in its slasher plotting, and never stops winking at the audience to brag about how clever it is even though these ideas ran out of steam before the 90s were over.

Director Christopher Landon never seems to be able to settle into a style for Happy Death Day. He certainly comes up with flashy shots, just rarely in ways that enhance the atmosphere or comedy. Maybe it’s because the movie is so tonally confused and reeking of re-edits. There are times when it’s pure slapstick. There are times when the filmmakers pine for achingly human drama. There are times when it’s a self-aware lark. There are times when Landon chases genuine scares and tension despite the fact the murders have no consequence and the magic rules of the universe are frequently broken. The movie is all over the place, which serves star Jessica Rothe well as an extended acting reel but pretty much guarantees that audiences never get a chance to become invested in the characters or world and if they are, a big slap in the face awaits them.

We’re going to get into spoiler territory with this paragraph so buckle up or skip ahead. The most frustrating and insulting part of the movie is how it wraps up. After being stuck in a clearly supernatural phenomenon with a killer who seems to disappear and reappear at will, somehow we’re finally supposed to buy that the whole thing is actually the result of a single murderer with a grudge. That makes no sense. There’s no attempt to explain how this killer managed to manipulate reality to repeat or pull off so many surreal and impossible murders. Presumably, the time loop just coincidentally linked up with a plotted murder and no, I refuse to accept that. There’s no need for the filmmakers to get into the fantasy mechanics of how the time loop happened, but any sort of acknowledgement or at least questioning is necessary if it’s somehow just the result of a petty murderer. Even Edge of Tomorrow at least mentioned a glowing alien that was nothing more than an inexplicable stopgap solution. Happy Death Day just pretends this is all normal and then tacks on a namecheck of Groundhog Day again to signal to the audiences that the filmmakers get it—but they don’t. That is not a get out of jail free pass, even though the movie has been marketed enough that it’ll likely pass go and collect $200 regardless.

As someone who enjoys a good dumb slasher movie, I’m willing to forgive and accept a lot for the sake of a cheap scare. Happy Death Day is an insulting step too far that not only delivers one of the most unsatisfyingly stupid reveals in years, but then smugly revels in its own cleverness. No. This is dumb. We should not accept this. Worse, Blumhouse and Universal have marketed this movie so aggressively that they are clearly hoping to launch a new horror franchise out of this turd and god-willing that’ll never happen. This nonsense doesn’t deserve the success. It’s nowhere near as smart or original as it thinks it is, even if the target teen demographic likely won’t have seen Scream or Groundhog Day and might get duped. I pray the youth of today are smarter than that. This is commercially calculated garbage that doesn’t know what it wants to be other than a hit and even cheats audience out of the natural gore and psychological horror inherent in the premise in order to cram in more jump scares to chase PG-13 success. Don’t fall for the trap. Just pretend this doesn’t exist. It’s for the best. Otherwise, we’ll all have to suffer through another timeloop in Happy Death Day 2 with even less ideas and even more smug satisfaction. No one deserves that. Except maybe the filmmakers responsible for this nonsense and they only deserve to be forced through that while serving time in the seventh circle of cinematic hell.

Liked this article and want to read more like it? Check out Pill’s take on Blade Runner 2049, American Made, and It! He also had a chance to sit down with Guillermo Del Toro. Check out his interview here!

Happy Death Day is a smouldering pile of half-baked and stolen ideas pretending to be original.
REVIEW SCORE
3
File Under: Horror