Well, it just ran out 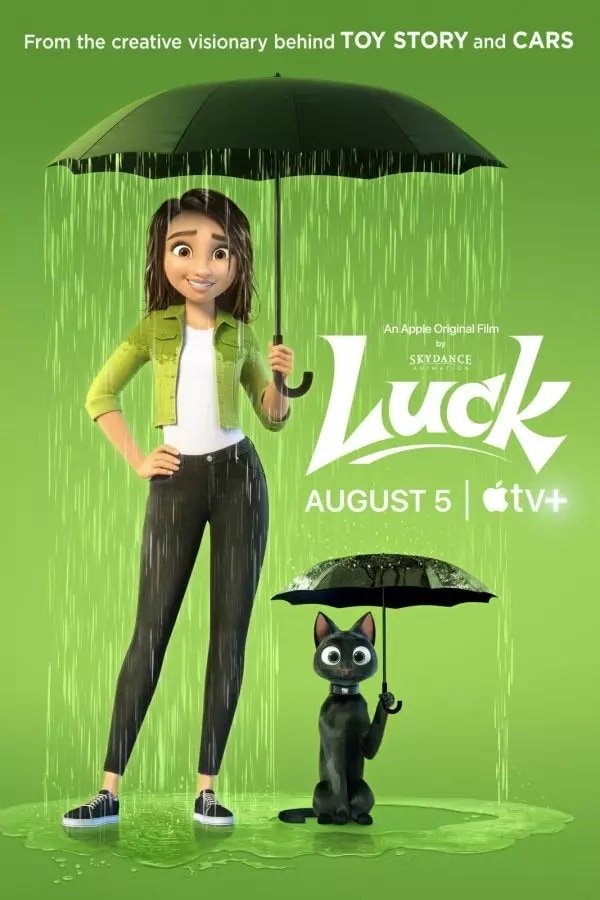 It’s really hard to talk about Luck without mentioning John Lasseter upfront. Following the period in which he left Pixar in disgrace, it seems like he was ready to make his mark at Skydance Animation as studio head: but things have already been rocky, to say the least (culminating in a situation where Emma Thompson left the movie because he was brought on). Well, if this movie is anything to go by, it’s partial proof that he should stay retired.

Framed around the concept of “luck,” our hero Sam Greenfield (Eva Noblezada) is a self-described “unlucky” person, who is about to age out of a group home. She then stumbles upon the magical Bob, a black cat voiced by Simon Pegg. It’s a sweet concept, especially since we start with Sam completely on her own, moving into a new apartment and starting a new job.

“Luck feels like a concept that was morphed into multiple ideas, scripts, and media projects before settling on a messy film that just needed to get out the door.”

From there, the script takes a nosedive. Instead of seeing Sam potentially grow as a person in the real world, we’re whisked away to the “Land of Luck.” From there we get tons of Luck lore, none of which is particularly interesting or worthy of taking up a lot of time in the film; and a bunch of fantasy characters who move in and out of the story with ease, lacking impact. The pure soulless spectacle of many of the action scenes has rote ‘90s “check please” energy.

The film tries to do a lot of things: tug at your heartstrings, make you laugh out loud with low hanging “luck” fruit jokes (like Leprechauns existing), and hardly none of it lands because of the constant tonal push and pull. The script can be very frank and too expository, in part due to the “Land of Luck” mess that has to explain so much and overstay its welcome.

In a bizarre fashion, Luck tries to dump a ton of world building on us like it was a television series, then abruptly ends: visually, not a lot is done to make us care. The animation is what I’d call “Pixar adjacent,” but most of the cast lacks the emotive elements of Lasseter’s former home. All the attention was put on Sam and Bob, and not much else.

Luck feels like a concept that was morphed into multiple ideas, scripts, and media projects before settling on a messy film that just needed to get out the door. It starts off promising as we’re rooting for Sam (albeit with plenty of cheese factor), then it starts to get incredibly convoluted, and fails to tell a cohesive standalone story.