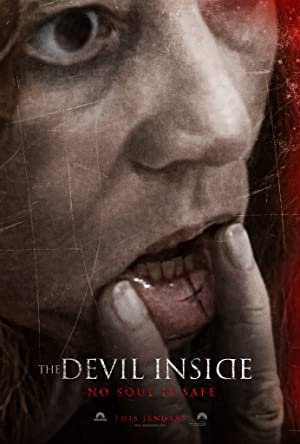 If there’s some good news to be taken out of The Devil Inside for horror movie fans it’s that the film is the first to be released from Paramount’s new zero-budget horror production company. It’s the first time a major studio has dedicated part of their production arm to horror movies in years and encouraging for fans of the genre. The bad news is that the first film that Paramount has shat out is The Devil Inside, an irritatingly predictable and tired found footage exorcism movie, you know kind of like The Last Exorcism that came out a whole two years ago.

The Last Exorcism was decent, but had to overcome the unfortunate fact that it both knocked off the most beloved horror movie of all time and go through the found footage horror motions that are getting very familiar, very quickly. The Devil Inside not only suffers from those unfortunate comparisons, but can’t even live up to the mediocrity of The Last Exorcism. It’s nice that a few people in Hollywood are interested in horror again, but if The Devil Inside is any indication of what’s to be expected from this new sub-studio, it’s going to do more harm to the genre than good.

The film opens in 1989 when a woman named Maria Rossi (Susan Crowley) called 911 to announce that she’d murdered a few people and then a crime scene video reveals that she was the focus of a botched exorcism that ended with her slaughtering a few priests and a nun. So far, not a terrible horror flick, but then the silliness starts. For reasons the filmmakers can never be bothered to explain (probably because they didn’t even work it out for themselves in the writing stage). Rossi is sent to Italy to a mental hospital near the Vatican, where she’s held for 20 years and counting. Then in 2009 her daughter Isabella Rossi (Fernanda Andrade) flies over to Italy with a camera-totting buddy (Ionut Grama) to make a documentary about her mother. They soon befriend two medically trained priests (Simon Quarterman and Even Helmuth) who invite them to an admittedly well-staged exorcism and then plan to do the same for Maria. Guess what? Things don’t go quite as planned and soon Maria isn’t the only member of the cast who is possessed.

The script for this movie is a bit of a non-starter. It’s as if the writers (director William Brent Bell and Matthew Peterman) never bothered to sketch out their idea beyond the fact that it would be about exorcism and take the form of a fake documentary. The characters are sketches at best with the unknown cast doing what they can without ever managing to seem like more than pawns in a scare factory. Admittedly a couple of decent and shocking exorcism sequences are included, the first of which rather brilliantly features an arm-popping contortionist in the possessed role. There are a few other moderately successful scare scenes inserted throughout, but it’s impossible to get too wrapped up in them because the characters are so one-dimensional and at a certain point the plot isn’t about anything beyond stitching together set pieces. Obviously this isn’t the first horror movie to function purely as a scare generator without concern for plot. However, it’s a particularly frustrating example given that the Italian Vatican setting is so ripe with possibilities and the material is endlessly reminiscent of The Exorcist, which creates some lofty expectations.

At a trim 87 minutes, The Devil Inside at least doesn’t outstay it’s welcome and I suppose if you’re anxious to head out to the theater to see anything vaguely reminiscent of a horror movie, you could do worse…but not by much. This is lazy filmmaking created purely to capitalize on the found footage horror trend led by the success of films like Paranormal Activity, Cloverfield, and [Rec]. Sure, the found footage knock-offs are marginally more interesting than the endless stream of slasher movie copycats in the 80s, but it’s still lazy filmmaking at this point.

Perhaps the most irritating part of the movie is the way that Paramount is overtly trying to create an unearned Devil Inside internet phenomena. The film stops rather than concludes with countless plot threads left dangling. A title card then appears on the screen urging viewers to check out a Devil Inside website where they can further explore and complete the story. The ending was met with a series of exasperate sighs and boos at the screening I attended and I have to call bullshit on that. Online content can certainly be an interesting extension of a movie, but only when the film proves intriguing enough to create a fanbase demanding more. Simply cutting out important footage for an online campaign is the work of an irritatingly shrewd marketing department saying, “hey kids like the internet these days, we can make some money on that!”

There’s nothing genuine about The Devil Inside. It’s a commercial product designed to capitalize on audience familiarity and love for successful devices pulled off in other, better horror movies. Going to see it will simply prove that the producers can trick you into thinking you want to watch something. Don’t fall for the trap. It’s nice to hear that Paramount wants to get into the horror business again (they did create the Friday The Thirteen franchise after all), but the company should only be rewarded for actually taking a risk and creating something new that audiences want to see. Xeroxing previous successes doesn’t count as filmmaking and hopefully The Devil Inside will quickly bomb and end up at the bottom of DVD bargain bins where it belongs.

Donâ€™t fall for the trap. Itâ€™s nice to hear that Paramount wants to get into the horror business again (they did create the Friday The Thirteen franchise after all), but the company should only be rewarded for actually taking a risk and creating something new that audiences want to see.
REVIEW SCORE
4
File Under: Horror