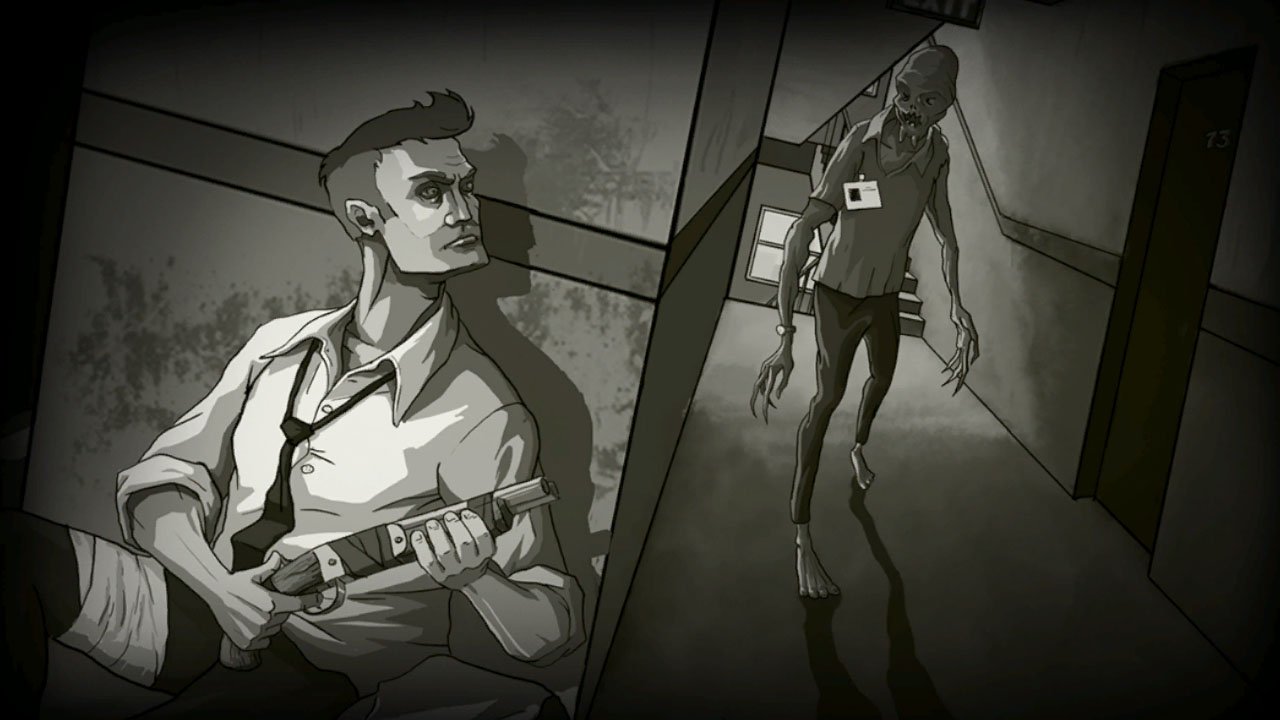 When planning your next vacation, always make sure to read reviews for the hotel you plan on staying at as it can save you a lot of hassle upon arrival. For instance, I wouldn’t give the Skyhill Hotel a rave review, nor would I recommend it to family and friends. For one thing, there are only two rooms on every floor, and on top of that, many of the elevators seem to be broken thus requiring you to use the stairs. As the penthouse suite is really the only half-decent room, this means walking down the majority of the Skyhill’s 99 floors.

Oh, and there’s the mutants.

Nothing like a 7-foot-tall beast swinging a giant sack of congealed tissue and poison at your head to ruin your holiday. On the plus side, the proprietors of the establishment have been kind enough to leave plenty of tools, weapons and tasty snacks scattered about the hotel to help with the infestation. And if you get hungry or thirsty, you can always get your fix with a delicious rotten grapefruit and some cheap liquor.

The basic plot behind Skyhill is gleaned through reading notes you’ll find pinned to elevators and within ruined rooms, radio and television broadcasts, and misplaced cell phones. As well, the protagonist occasionally narrates for you his twisted thoughts. Basically, the world is ending, people are becoming infected and turning into mutants, and you have to safely navigate the treacherous path from your safehouse at the top, allllllll the way to the ground floor, 99 levels below.

As far as gameplay goes, Skyhill is basically a rogue-like, crafting-heavy RPG that’s a little light on the exploration side of things. You have a hub room at the top of the tower where you craft items and sleep, and from there, you tackle each floor, one at a time, battling randomly generated monsters and searching for items.

These items are used for the crafting system, which is the heart of Skyhill’s gameplay. From weapons to health packs and food, every room contains bits and pieces to make even bigger bits and pieces. As you progress through the game and level up, you can use these bits and pieces to craft items or unlock more recipes. There are three major categories: weapons, which are self-explanatory, health, which includes things like medpacks and antidotes, and food, which you eat to battle hunger.

The hunger system is basically your AP for movement and exploration. Each time you go into a room or down a set of stairs, you lose some hunger. Over time, your character will need to consume the food he finds throughout the levels or starve to death. In your hub room, you also have the option to sleep, which restores health at the cost of hunger. Food recipes can be unlocked via the crafting system, allowing you to manufacture better items for more hunger points. Or, like me, you can just eat the crappy stuff as you find it and plod along as a gaunt, starving wreck.

Combat pits you against randomly generated monsters, which grow in difficulty as you progress throughout the game. Once combat is initiated, it’s you versus the monster, and a turn-based system allows you to trade blows until one of you is dead. The game allows you to pinpoint certain body parts, similar to the VATS system in Fallout, where more damage = less probability to hit.

It’s a very basic, through-the-motions element of the game that gets old pretty quickly. The only thing that ever really changes is the damage output and hitpoints of the monsters, with little to no variety in tactics or strategy to play around with. Depending on where you encounter the monsters, you can choose to run away and avoid them, and unless you’re a keener for leveling up, there’s not a ton of motivation to engage in a difficult fight.

Skyhill is a decent way to kill a few hours, and the crafting system has a mildly addictive nature that is somewhat motivational when it comes to continuing to play through the boring exploration and bland combat. A surprising difficulty curve keeps things interesting, but the lack of variety in attack options makes it more frustrating than anything. The visuals remind one of browser-based flash games, and outside of a handful of creepy monster designs the art won’t blow minds. Also, make sure to play until the very end to get one of the most disappointing and left-field endings I’ve come across in ages.

The basic plot behind Skyhill is gleaned through reading notes you’ll find pinned to elevators and within ruined rooms, radio and television broadcasts, and misplaced cell phones.