And Catwoman strikes back against the Joker!
Alex Handziuk | June 20, 2018

This week’s Best Comics list is highlighted by Dan Slott’s first issue of Iron Man, Catwoman and Joker’s faceoff in Batman #49 and the beginning of the end in Wayward. 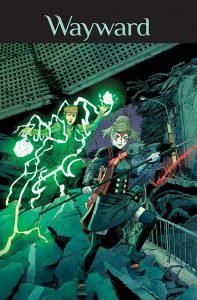 After 25 issues of fighting and isolation, the heroes of Wayward are finally all back together in this week’s issue #26. For longtime readers, this reunion has been a long time coming, and since the series is almost over, it promises to be an action-packed one.

For those who haven’t read Wayward, the series first debuted four years ago, and the story revolves around a conflict between the old gods of Japan and the new gods of Japan. The catch is that the old gods are ageless deities, while the new gods are kids with angst and parental issues. Since it launched, Wayward has been one of the best books on store shelves, and writer Jim Zub and artist Steve Cummings have crafted a vibrant world full of high stakes and lots of action. This is a series that is almost over, and one that is more than worth owning in trade paperback format. 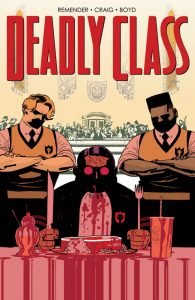 Deadly Class is the best comic series of the past five years. Now that may seem like a bold claim given the wide assortment of stellar stories that have graced the comic book format in the past half-decade, but it’s also true. For the past 34 issues, the series has crafted a tense tale about a school for assassins that has been full of over the top murder and regular teenage problems.

This issue is the fourth part of the current story arc, and there have already been a number of world-changing revelations in the first three parts. At the end of the last issue, readers were treated with a cliffhanger that involved main character Marcus potentially shooting and killing his longtime adversary, Victor. Marcus’ choice to shoot or spare Victor will no doubt set the tone for the series going forward, and if the cover for this issue is any hint, then it’s bound to get a whole worse before it gets better. 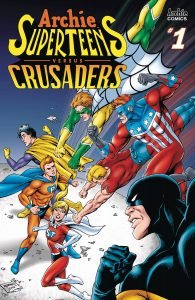 Archie and the gang can be a handful. After all, Archie’s extremely clumsy, Reggie’s a conceited jerk, Veronica’s snooty, Moose is dumb as a row of bricks and Jughead eats everything. Throw in the hijinx that occurs as a result of Betty, Archie and Veronica’s love triangle, and it’s safe to say that any teacher tasked with teaching them would end up becoming at least a little unhinged. That concept comes to life in this week’s Archie Superteens vs. Crusaders #1, as a substitute science teacher becomes fed up with the gang’s antics and decides to gain revenge by becoming a supervillain.

Archie Comics has shown a passion for telling unexpected stories in the vs. format such as Archie vs. Sharknado and Archie vs. Predator, and this one promises to continue that wonderful trend. It’s also been a while since readers have seen the Archie Superteens, and this issue actually marks the first meetup between them and the Archie Comics‘ superhero team, the Crusaders. If you’re a fan of all-ages fun with a whimsical Archie twist then this is an issue that deserves a look. 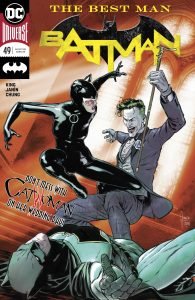 A few years ago, it seemed like there would never be another marriage between DC Comics characters. The thinking back then was that the company wanted their characters to be timeless, and adding relationships and children tended to age them. Thankfully, this streak is ending with a bang in issue #50 with the wedding of Catwoman and Batman. However, in this week’s issue #49, there is an entity set to stop the marriage, and although this time it’s not DC editorial but the crown prince of crime instead.

The last issue was all about the Joker and Batman, as writer Tom King and artist Clay Mann pitted the two foes in a tense standoff that ended up being some of the best characterizations that we’ve seen from either character in some time. In this issue, it’s Catwoman’s turn to shine as she is tasked with saving her husband to be. Stories involving Catwoman and Joker have been few and far between, and so this issue is extra special. Also, since this is the last issue before the big wedding day, it’s no doubt going to be one to remember. 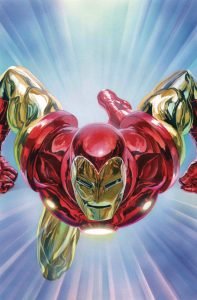 After more than five years on the character, Dan Slott is finally concluding his run on Spiderman this week in an extra-sized annual issue. However, while that ending is exciting it is what he’s working on next that lands a spot on the Best Comics list this week, and that is Tony Stark: Iron Man #1.

At his best, Slott has shown to be a revolutionary writer who is not afraid to take characters in bold new directions. And while not much is known about this issue, Slott has shown that he more than deserves the benefit of the doubt when it comes to launching a new series. This could very well be the start of a lengthy run, and this week’s issue is a rare chance to be locked in right from the beginning.

Liked this article and want to read more like it? Check out Alex Handziuk’s interviews with Archie Superteens vs. Crusaders writer Ian Flynn and Comics Veteran Howard Chaykin.