This week’s Hot Comics to Buy list features stellar creative teams that have worked extensively together, as well as a very hungry werewolf. 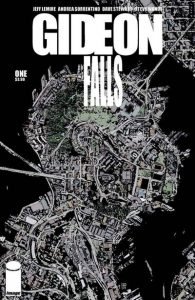 Last week the Hot Comics’ list highlighted the work of writer Jeff Lemire and this week he has yet another promising book coming out in Gideon Falls.The series is billed as a collision of rural mystery and urban horror that will feature the topics of obsession, mental illness, and faith. It focuses on the life of a reclusive young man who’s obsessed with a conspiracy involving trash in his city and a washed-up Catholic priest who moves to a small town. Bringing the characters together is a supernatural building called the Black Barn which has reportedly appeared in both the city and the town.

Gideon Falls reunites the creative team from the New 52’s Green Arrow as well as the recent Old Man Logan comic and promises to perhaps be even better than their previous collaborations. They have shown in the past that they have a knack for telling suspenseful stories, that often meander into the realm of horror. It’s also interesting to note that Gideon Falls marks their first creator-owned collaboration and we could see them push boundaries that they simply couldn’t with Marvel and DC. 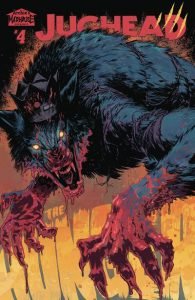 Perhaps the best example of synergy in comics is the relationships between Archie Comics and strange concepts and crossovers. From Archie vs. Predator which pits the Riverdale gang against the famous movie monster to The Archies which features the gang going on tour with real-life musicians, the publisher has shown that they are not afraid to try new things. Jughead The Hunger is yet another example of this. It may be a common fact that Jughead Jones loves to eat, but The Hunger takes his hunger and turns it into a more sinister and werewolf laden direction. The series reimagines Jughead’s family as cursed werewolves and pits him against Betty and her family of werewolf hunters.

Issue #4 serves as a great jumping on point as it takes a trip back in time to show the origin of Elena Cooper, one of Betty’s mysterious relatives. It’s also drawn by the dynamic team of Pat and Tim Kennedy, who are most well known for their Life With Archie series. They manage to bring more than just conventional horror tropes and their characters have a real presence to them. If you’re jonesing for a wacky horror set in the Archie Comics Universe, then Jughead The Hunger is the book for you. 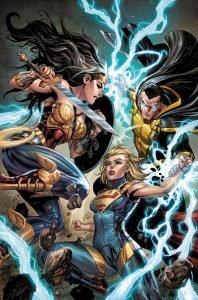 Tom Taylor and Mike. S Miller has been teaming up on the Injustice series for a little over four years and in that time they have delivered one of the most exciting books on comic store shelves. What’s more is that Injustice 2 achieves the rare feat of being a video game spinoff that’s actually engaging in its own right. Issue #21 has Booster Gold training the new Blue Beetle, Jaime Reyes, for the first time since the original Blue Beetle, Ted Kord, died. It’s going to be an interesting dynamic as Booster and Ted were best friends and it remains to be seen how Booster’s relationship with Jaime will play out. This issue also features Bruce Wayne’s son Damian heading to Gorilla City to join his uncle Ra’s al Ghul.

The story of Injustice began with the Joker murdering Superman’s wife, Lois Lane and Superman exacting revenge by killing the Joker and trying to take over the world. Since then countless heroes and villains have died and the war continues to rage on. Injustice is very much a celebration of DC comics history and writer Tom Taylor has shown a knack for deconstructing well known as well as obscure heroes and villains. This is easily one of the best non-continuity superhero stories ever told and issue #21 promises to add to its legacy.

Originally announced back in 2015, Highest House is a new series from Mike Carey and Peter Gross, the team behind the Hugo Award-nominated series Unwritten. The series was also supposed to release in 2015 from the French publisher, Editions Glenat, but was delayed for unknown reasons. Highest House #1 tells the story of a slave boy named Moth, who is promised happiness by a mystical being in exchange for friendship. While we don’t know much more about the series, Carey and Gross have a track record of telling top-tier fantasy tales and Highest House #1 should be no exception.

Warren Ellis and Jon Davis Hunt are perhaps the best team in comics right now. They work seemingly effortlessly together, with Ellis’ robust espionage laden scripts playing off of Hunt’s fantastic character work. The series has been one of the slowest and most intimate on store shelves, and very much reimagines what a story about espionage can do. The Wildstorm #12 marks the conclusion of the first year, as well as the halfway point of this series. In this issue, Angela Spica, is back to her larcenous ways and the tensions between the various factions and organizations in The Wildstorm are approaching their boiling point. Also, this issue is set to pull back the curtain on Project Thunderbook, which promises to make things much, much worse.

However, since The Wildstorm is such a slow and detailed series, it really works best if you read it in bulk. I’m including this issue on the best comics list because it’s fantastic and worth the read, but if you want the full Wildstorm experience then you should definitely pick up the first collection.

What’s your favourite creative team in comics? And what books are you looking forward to this week? Let us know in the comments below!

Liked this article and want to read more like it? Check out our list of the Top Graphic Novels to Buy Today and the Best Comics from Last Week.