While making this week’s list of top comics I realized that Jeff Lemire writes a ton of high-quality books. Between last week’s Royal City #10, this week’s two new #1’s and his new series Gideon Falls, which debuts next week, the comic book landscape is full of Lemire’s work. And, thankfully, it’s pretty much all terrific. 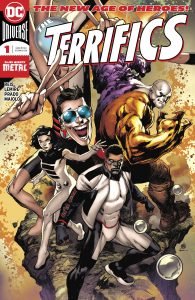 A spinoff from DC Comics’ Dark Knights Metal event, The Terrifics #1 makes this list more so because of Lemire’s pedigree as a storyteller and less so because of the book’s concept. The series pitch seems rather standard for a superhero team book, as the characters find themselves lost somewhere in the far reaches of the universe where they have to put aside their differences and band together to find their way home. That being said, Lemire has shown a knack for writing team books and for writing lesser known heroes as well. The team roster is made up of Mr Terrific, Metamorpho, Plastic Man and Phantom girl, which is exciting as the heroes haven’t been used all that much in the last few years.

The Terrifics #1 is also Lemire’s first book with DC since he left the company in 2014, and it’s nice to see him returning to the DC Universe. Back in the New 52 Lemire rose to fame with his Animal Man run and went on to write Green Arrow, Justice League Dark, and Justice League United. On top of the stellar writing, this book is drawn by the uber talented Ivan Reis and should be an all-around great read.

Underwinter: A Field of Feathers #5

Underwinter: A Field of Feathers has been one of the most trippy and inventive books on comic stands since it debuted four issues ago. Part Lovecraftian nightmare, part surreal adventure, the series tells the tale of a family that is torn apart by a by a hidden curse and must flee the horrifying transformation that’s overtaken their mother.

Underwinter is a book that often requires more than one read to fully comprehend and even then it’s not always perfectly clear what’s going on. That being said, the painterly and mysterious style that this book holds is wholly unique and a true tour de force. The series is very much Ray Fawkes’ best comics work at Image Comics and cements his place as an upper echelon writer and artist.

Doctor Star and The Kingdom of Lost Tomorrows #1

A spinoff of the best superhero book of the past year, Black Hammer, Doctor Star and The Kingdom of Lost Tomorrow tells the story of an aged crimefighter who wants nothing more than to reconnect with his estranged son. Jeff Lemire thrives in depicting relationships so this story will no doubt be full of emotional depth and poignant moments.

On top of the main story, this miniseries promises to show the origins of some of Black Hammer’s greatest heroes. While it is a spinoff of the main Black Hammer series it is billed as accessible to new readers and should provide a nice jumping on point to the Black Hammer universe. Also, if you end up enjoying this issue then check out Black Hammer Vol.1, it’s seriously top notch.

Chip Zdarsky and Adam Kubert’s Spiderman Run has been a joy to read so far and it seems more than fitting that the duo gets to head up the special 300th issue of the series. While they haven’t been on the book for 300 issues, Kubert and Zdarsky have each made their mark on Spiderman. Zdarsky has impressed with his stellar comedic writing and often surprising heartfelt moments. What’s more is that Zdarsky has managed to capture Peter Parker’s (Spiderman) voice remarkably well, and tell stories that feel new, even for such an iconic character. Kubert’s line work on this series has been some of the best in his career and he manages to capture the energy and enthusiasm that has made Spiderman such an endearing character.

As for the issue itself, it marks the culmination of Peter’s fight against the vicious villainy of the Terrible Tinkerer and features a frenzy of formidable foes and friends. Alliteration aside, this issue should cause quite a ripple throughout the Marvel universe as well as some significant change in Spiderman’s world. It also features a number of guest stars including Black Panther and Ironheart and should make for a climactic anniversary issue. Also, the beautiful cover by Private Eye artist Marcos Martin is almost worth the price of admission alone.

Abbot #1 arrived as a welcome surprise, with its down to earth portrayal of life in Detroit in the 1970’s. The series focuses on Elena Abbott, an African American journalist who tackles supernatural cases that the Detroit Police services can’t handle. Abbott is a strong character, who manages to be both heavily skilled in what she does, yet vulnerable and relatable. Even though the series is only one issue in, it manages to stand out with its strikingly engaging lead and heavily realized world.

While the series does feature many supernatural elements, the strongest aspect is easily the day to day life of Abbott and her struggle against sexism and corruption. In fact, part of me wishes that the book would ditch the supernatural elements altogether and stick to being a journalistic period piece. That being said, if Abbott #2 can be as strong as the issue that came before it, this will be a series to watch.

What books are you looking forward to this week? And what’s your favourite project by Jeff Lemire? Let us know in the comments below!

Liked this article and want to read more like it? Check out last week’s Hot Comics To Buy List and the Valentines Day Special.