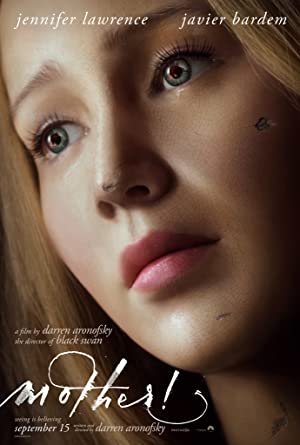 So here’s the thing about Darren Aronofsky’s latest cinematic provocation: it’s amazing that this movie exists. That’s not to say that no other filmmaker would be capable of making a surrealist nightmare horror movie like mother!, but who else could get it made by a major Hollywood studio with big name stars and a general release? Matter of fact, it’s unlikely that Aronofsky himself will ever pull this off again. For now, we can all marvel. In malls and suburbs across North America people are going to sit down for what looks like a spooky Jennifer Lawrence horror yarn and leave feeling as scared and confused as they are scared. That’s a good thing by the way. It’s nice to know that it’s possible for Aronofsky to not only make his strangest film since Pi but deliver it on this scale.

Plot descriptions for this movie can’t help but feel misleading or confusing, but let’s try anyways. Jennifer Lawrence plays a character known only as Mother. Javier Bardem plays her husband (credited as Him). He’s a poet with writer’s block, she’s a housewife struggling to pull together their isolated home that is in constant disrepair—the symbolism is loud and clear. Into their crumbling home wanders an unexpected guest in Ed Harris. He’s a big fan of Bardem. Next thing you know his wife shows up (Michelle Pfeiffer). They both refuse to leave and seem to be consumed with making Lawrence as uncomfortable as possible. Then their kids show up. There’s a murder. The blood spills on the floor and the stain turns into an open wound. This is when things start getting weird. Well, weirder than before anyways. Nightmarish even.

If Black Swan was Aronofsky’s stab at surrealism as a subjective nightmare from a woman with fragile sanity, then mother! is a movie that starts in a mind plagued by psychosis and slowly spirals out of control until the audience is questioning their own sanity. It starts with heightened visions of awkward intrusion and then the next thing you know the house is filled with people committing almost every conceivable form of human atrocity. Unsurprisingly, it happens once Lawrence gets pregnant. There are Rosemary’s Baby vibes aplenty, but conventional psychological horror isn’t nearly enough for this movie. This operates on nightmare logic. Reality is but a thread that pulls us along and terror seems to spring out of every unknowable corner.

Despite a concept rife with opportunities to show off with big sweeping visuals, Aronofsky mostly keeps things tight. With a few stunning exceptions, he primarily uses the handheld prying visual style of The Wrestler and Black Swan to trap viewers with Lawrence’s character, unable to control or understand the madness exploding around her. Performances are all stylized, from Lawrence’s constant rising panic to Bardem’s creepy calm and especially Harris and Pfeiffer’s darkly comedic sycophants. There’s a layer of dark humour undercutting all the nastiness and nuttiness throughout, keeping Aronofsky from getting too pretentious. That’s a good thing because this is a bonafide art horror film somehow granted a mainstream release. There are layers of symbols and meanings. It could all be a horrific metaphor for motherhood or artistic creation or some sort of twisted religious parable. It’s hard to say and there’s a chance that not even the filmmakers are certain. That’s not the point.

Sure, mother! is most certainly a movie that is much too much. It has some profoundly unsettling imagery. It’s somehow both willfully obtuse and loudly overstated. The film is designed to frustrate and discomfort viewers, not always in positive ways. It ain’t perfect, but dammit it’s an undeniably intense cinematic experience and a remarkable Hollywood experiment. mother! is exactly the sort of director-driven head-trip that the studio system should stomp out. Yet here it is, and even better, it’s a searing and scarring experience that impossible to forget or shake off regardless of whether or not you understand or even like what Aronofsky accomplished. This is not his best movie or his worst, but It is certainly his most daring and terrifying. Not to be missed by viewers who enjoy the entertainment strange and morbid—especially on a screen so large that you can’t possibly escape.

Darren Aronofsky somehow got a surrealist nightmare sold and released by a Hollywood studio as a horror film. Even better: it’s good!
REVIEW SCORE
8
File Under: Horror, Jennifer Lawrence, TIFF