Can The Rhythm Genre Survive Another Battle Of The Bands?

This week, it became official; the gauntlet that Rock Band 4 threw down was picked up by Guitar Hero Live,and with that, the two biggest plastic instrument games of the last generation are getting ready to battle once more in the new console generation. The last time this happened, the market initially embraced it with Harmonix’s original Guitar Hero, since it was fresh and new. Then Activision bought out the property, pushing Harmonix away, and Harmonix responded with Rock Band, which gave us not just a plastic guitar, but plastic drums, a microphone, and eventually even a keyboard. Activision countered this in two ways; they slavishly imitated the trend, releasing their own “Band Hero” games with drums and microphones as well, and they released a new game every year, often more than one, thus oversaturating the market and eventually killing off demand for games in this genre entirely.

So now it’s been a few years, and there’s been a lot of low level murmuring among the players who recall those heady, innocent days of rocking out with friends, just having fun, and thinking, “Y’know what, I wouldn’t mind doing that again.” And once more, both Harmonix and Activision are answering the call.
The big question is, are we looking at a repeat of what happened the last time? Is this all just going to end in a surplus of music games to the point where people say “Thanks, but no thanks,” and the market crashes again?

This time, the answer to that question depends almost entirely on how Activision behaves.

Harmonix has already made their game plan clear this generation. There’s only going to be ONE Rock Band game, and that’s Rock Band 4. You buy that game, and everything else, whether it’s songs, new features, or upgrades to the base game, will be either free or paid downloadable content. Harmonix is committed to walking away from the “Annual $60-$70 Minor Tweak With New Songs” business model that was the mainstay of the genre in the last generation, so now that game is Activision’s to “win,” or lose, as it were.

Harmonix has already decided that they will be content with the profits made from players simply buying new songs to bulk up their collection. They’re even walking away from the potential profits of new plastic instrument sales by working to ensure existing, older Rock Band peripherals will still work with the latest game. They are also working to ensure that previous Rock Band on-disc songs and DLC will carry over to RB4, so again, they’re actually leaving some money on the table. They’re trying very hard to say to the music game fan, “We’re not trying to empty your wallet of every last cent you have.”

Activision has already made it clear that because of the new six button layout of Guitar Hero Live, every player will have to step up and buy a new plastic guitar, which, of course, is just more money in Activision’s pocket. For this very first game, no will have a choice; EVERYONE will have to shell out a bit more for a bundle of the game + guitar, and they’re charging US$99.99 for that, so Canadians can expect to pay over CAD$100. On top of this, they’ve also confirmed that previously purchased games and DLC songs will obviously not work with the new game because of the guitar only, six button layout, so again, everyone that wants a big, beefy song collection will have to spend. 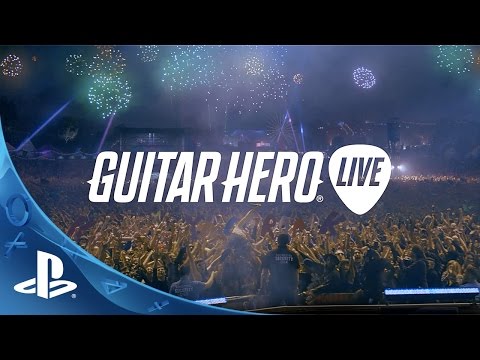 What’s interesting is that this time, Activision is taking a different approach to songs as DLC. When you buy a song, you’re not just getting the song, you’re also getting the original music video made by the original artists for that song. So, people that just can’t get enough of Maroon 5 gig-bombing people’s weddings at random in “Sugar” can watch the video while playing the song. There’s still no word on whether Activision will be doing the same thing they did the last generation, with a relentless release schedule of games. But, considering the kind of money they have, and the fact that this is now an “FMV game” where you play with a band, it’s certainly financially lucrative to have a Guitar Hero Live: Aerosmith or Guitar Hero Live: The Killers. They simply go into the studio with the respective bands, record performance footage, and then repeat the same FMV mechanic, only now it’s YOU playing alongside Steve Tyler, or Brandon Flowers.

One thing is for sure, this new generation of music games is unlikely to become the huge commercial fad it was the last time. Harmonix seems to understand this, and is approaching the fight with a more humble, less greedy attitude, but will Activision do the same? The optimists will say yes, but when was the last time a big, multi-national corporation acted in a caring, altruistic manner?