Get With the Modern Times

Hello friends and welcome once again to Patch Notes, now in our new slot on Fridays. What better way to spend a weekend that by checking out some of the fine DLC and patches that are available for your favorite games? Speaking of favorite games, this week I’m going to talk about an expansion to one of my favorite games: Tropico 4. 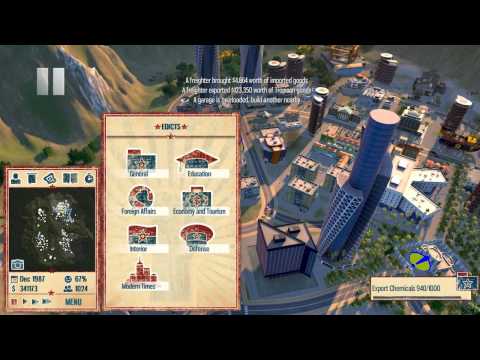 I have a huge amount of love for civic management simulations; I’ve been in love with the Civilization series for years and have put many hours into games like SimCity, Cities XL, and of course the ridiculously satirical Tropico. Tropico 4 was released back in August of last year and received a lot of my praise. I’ve always enjoyed the series’ satirical take on global and local Caribbean politics, and the way Haemimont Games has blended a civic management simulation with a comedic and compelling narrative. This week Tropico 4 released its biggest expansion to date: Tropico 4: Modern Times. This latest expansion brings the world of Tropico and El Presidente into the 21

century with modern buildings, new edicts, and 12 new scenarios. As El Presidente, you will try and bring your banana republic up to speed as you navigate through the global economic crisis, environmental disasters, the dawning Internet age, and of course, those always troublesome rebels.

I’ve been fortunate to spend some time with an Alpha build of Modern Times over the last month, and I’m quite impressed with how well these new buildings and scenarios give the game some modern flavor while maintaining the game’s traditional cold war era paranoia and comedy. What’s great about this expansion is how much it expands upon the core Tropico 4 experience without losing any of the base game’s charm. I did notice that there seems to be a very “green” agenda among the new buildings. Buildings like Bio Farms and Organic Ranches are more efficient while minimizing their environmental impact, which in turn keeps those pesky environmentalists happy. Additionally, being able to build modern skyscrapers allows you to give your island paradise a distinctive skyline that will be the envy of all the other Caribbean islands. The scenarios and edicts are also reminiscent of recent events. If your people aren’t doing their jobs because they spend too much time on the web, you can limit your people’s Internet access or block the web altogether. Just be prepared for a libertarian uprising—but without a good coup attempt or some light protests it just wouldn’t be Tropico.

Another feature of the Modern Times expansion I noticed was how much the global economy fluctuates, particularly when it comes to commodity prices. If you put all your resources into coffee production you may find demand for your beans drop like a stone. Just remember to keep the international superpowers like the European Union and Middle East happy while you play the U.S. and USSR superpowers against each other; if no one is buying, your exports are pretty much worthless. Keeping the superpowers happy is one thing, but what about the Tropicans? There’s a lot you can do for them as well. I tend to lean towards the super socialist style, and you can always use traditional edicts like Free Housing or Food for the People to keep the locals content and well fed. If socialism isn’t your style, turn your island into a police state and people will be too afraid sneeze, let alone question why they toil in the fields and live in tenements while you grow fat on kickbacks in your palace. One of my favorite parts of Tropico is the balancing act between making money and providing for your people, whereas other similar games tend to just have you balance unemployment with housing.

While I haven’t had much interest in the other pieces of Tropico 4 DLC, Modern Times is beefy enough to warrant any Tropico fan’s attention. There’s a lot of game here for only $19.99, but being an expansion the base Tropico 4 game is required to play. However, it is at the relatively modest price point of $39.99 and that’s worth the price, even if it’s only to tide you over until the 2013 release of SimCity. I’m just happy that some companies are still putting out real expansions rather than just selling you pieces of DLC for $5.00 a shot. Who says that expansions are dead? In the world of Tropico they are alive and well, and as fun as ever.

Tim Ashdown vacations often in the Caribbean and can attest to the accuracy of this game.