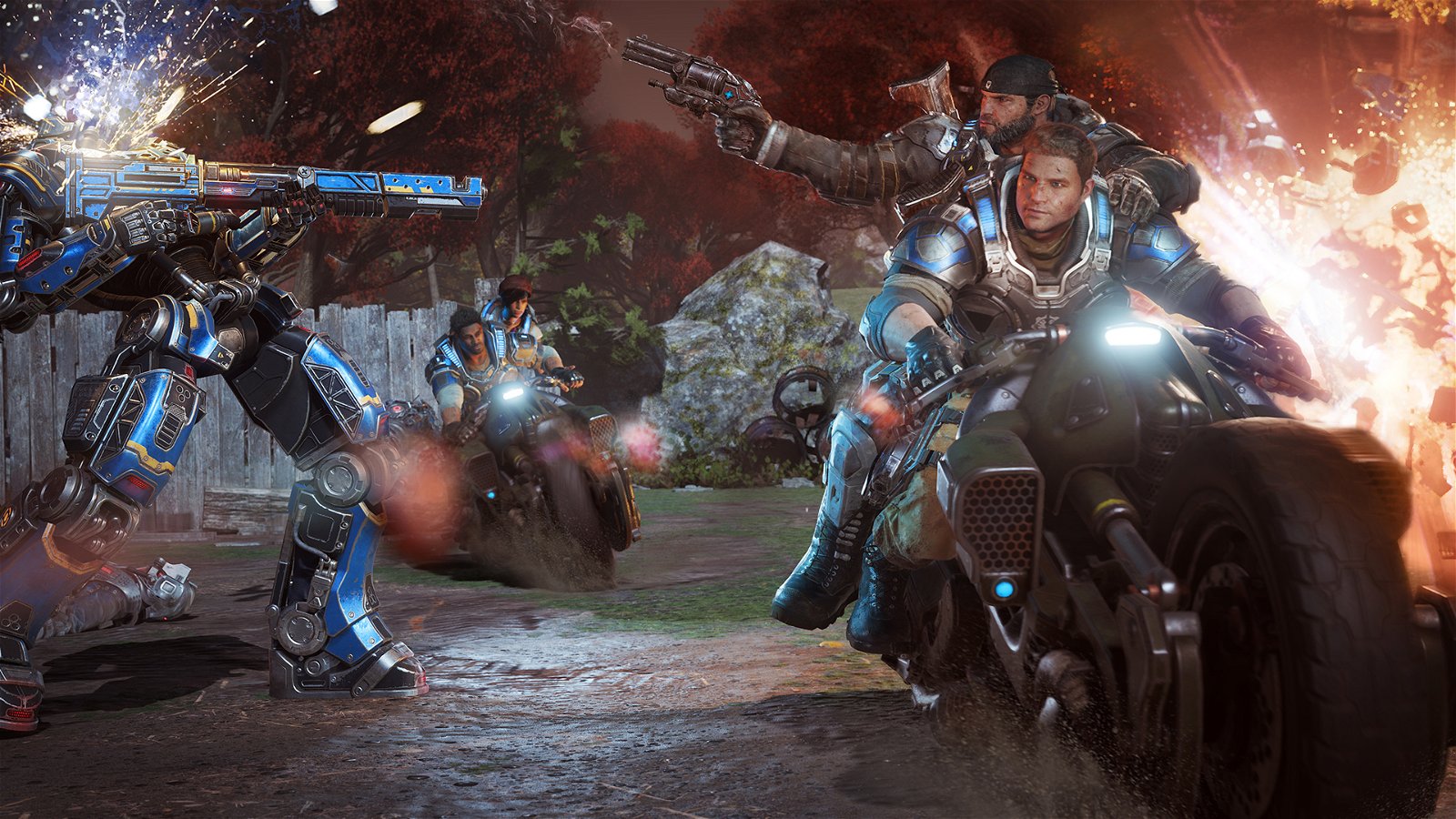 Since launching in 2006, Gears of War has managed to be a staple of the Xbox lineup. Its successful marriage of brutal action and a complex storyline has led to perpetual popularity. Now, almost a decade after the launch of the first game, a new studio has taken the wheel of this pedigreed franchise. Epic has passed the torch onto the newly formed The Coalition, helmed by series veteran Rod Fergusson, along with a selection of the old crew.  Together they are building a new chapter in the Gears saga. Bringing a new cast of characters and passing the reigns of the series from Marcus Fenix, to his son JD. Though there are many changes to the game, one thing is clear. The Coalition are managing to build an exciting installment that pushing things to a new, darker place that fans will enjoy.

Gears of War 4 takes place 25 years after the events of the last installment. The world is slowly recovering as humanity struggles with the realities of the past conflict. Society is now split into two major factions, the COG (Coalition of Organized Governments) and the Outsiders. The COG, now run by First Minister Jinn, find themselves facing a series of disappearances. Believing the Outsiders are to blame, they send in a force to get answers. They choose to attack the settlement with our central heroes JD, Del, and Kait. This is not the only thing our main characters are facing, though – a new threat known as the swarm are abducting  humans, including the Outsiders’ leader (and Kaits mother) Reyna. It is now up to our heroes to push though one hellish quest to rescue everyone facing a fate worse than death.

With a new game comes a new setting to explore. The world of Gears of War 4 is familiar yet different, with the deviation of past conflict still present all across the landscape. Nature within Sera has reclaimed the landscape. What where once magnificent structures built by humanity are now covered in growth, engulfed by neglect and the changing world around it. It’s a picturesque setting, filled with forgotten beauty that makes for a great setting for the storyline The Coalition are trying to tell.

Taking the reins of the son of Marcus Fenix, JD felt familiar even though he is a much different character then we have come to expect from the series. Where Marcus was a pessimist, beaten down from war, JD is much more optimistic. He wants to step out from his father’s shadow and be able to lead his friends, and people need. It is not an easy mission for him, as the Swarm and the COG are out for blood, and he and his friends must push past their fears to find the strength to push forward.

This is a story about struggle, and into a new type of Gears story, one that brings new ideas and characters to the series. It’s set in a world that is far past what players experienced in the first games, yet the more things change, the more they stay the same. The Swarm, although a new enemy, manage to feel familiar. From the warrior like drone, to the animalistic Pouncer, this is threat our heroes will need to push themselves to the limits to survive.

I managed to not go long without JD’s Father, Marcus Fenix making an appearance. Looking weathered by age, Marcus is now even more of a bitter, cynic. Over two decades years after the events of the third game, he no longer has much love for the COG or the world as a whole. Although he does not stick with your party long, it was a great touch in making sure it felt like a Gears game. As soon as he made an appearance, the dialog and overall sense of the story shifted, from a simple action story, to one that felt right in line with past games. It was a great way to give a personal touch to the new character of JD while still having enough for past fans to enjoy.

Minutes after placing my hands on the controller, the unmistakable feeling of a Gears title was ever present. The movement, sense of power, and the brutality all felt like I was coming home to an old friend. This signature ebb and flow of combat are what make the franchise so interesting. From the way the enemy will try to pin you down, to the way you push through to the next set piece and story beat. The ever expanding arsenal that present new, more brutal ways to eliminate the enemy is something that is fun, and rewarding. Every inch of ground you gain feels like an accomplishment, one that allows for amazing moments that few games can manage. This is a game made by people that love the franchise and want it to live up to the level of quality people expect.

Fighting both the COG and The Swarm ensure things never get too dull. Both have unique ways of fighting, and tactics that will test skills in different ways. The COG are a much more organized threat. Possessing an array of weaponry, they will mix up tactics with vehicles, snipers and even aircraft. The Swarm on the other hand, are a much more primal force. Having only basic forms of organization, they are more brutal in the way they fight. Constantly pushing your group as they throw in many forms on monsters in your path. With this mix, The Coalition have evolved the franchise, while still maintaining the core gameplay that put the series on the map. I was worried new monsters to fight would take away some of the magic, but I am happy to say I was mistaken!

From the attack helicopter ripping through a mansion, to a series of giant creatures slowly moving on your position, the set-piece moments seen in Gears of War 4 are some of the best this generation. They blend the story segments with the visceral action, in a way that kept me on the edge of the seat. Through the two hour segment, there was never a dull moment, or one that overstayed its welcome.

Visually, Gears has never looked this good. The art team have taken the game players know and love, and injected new life in a way I never knew it needed. From the visual fidelity of the characters and world, to the organic look of the Swarm, this is the way I always wished this series looked. As I walked around the segment I played, there where constant things that caught my attrition, and many more that solicited an audible “wow” from me as I watched. Much like The Order 1886, Gears of War 4 has pushed visuals on consoles, and ensured Sony fans of something to be envious of this generation.

With any new installment in a beloved franchise, the fear of retreading old ground without adding anything to the formula is always present. From the two hour segment I played, there appeared to be enough new to make players excited to pick up a chainsaw Lancer once again and rip though some enemies. It is hard to say if the full game will manage to stay interesting over its 8-10 hour run, but if the first segment is anything to go on, fans should not worry. The team are putting everything into the experience, and that level of care and attention shows. Gears of War has never looked so impressive, felt so fluid, or been more interesting.