The creators of Borderlands have gone on to create another genre-defining game. Battleborn breaks all the rules by combining elements of RPG’s, Fighting games, and MOBAs into a colourful, action-packed FPS. Gamers can enjoy a singleplayer and split-screen co-op story mode, or experience a battle to save the universe in multiplayer mode. With 25 playable characters that make up a variety of fighting styles as well as design and story aesthetics ranging from vampire samurais, demonic four-armed mages, even a ninja mushroom, gamers at all entry points are sure to enjoy this wild, comedic ride. All who have had a chance to play it are eagerly awaiting it’s release this winter on PC, XBox One and PS4.

CGM had a chance to speak with Chris Thompson, the publishing producer for 2K on the Battleborn project to get some more information on a game that you just have to play to see how this mixing pot of genres and characters come together to make for an exciting time.
CGM: So Chris, tell us a bit about Battleborn.

Chris: At it’s core, it’s a first-person shooter. I think what really makes the game stand out is the fact that we have this huge cast of 25 playable characters and they’re all unique. They all have their own play styles, their own crazy personalities, abilities and weapons. The 25 characters, the Battleborn, all have to fight to save the very last star in the Universe. They realize there’s this dark enemy that has been speeding up the death of all the other stars, and now we’re down to this final one. So the story mode is all about them protecting that last star and saving the universe.

CGM: How did the choices of characters come to be? I mean, that fungus character is pretty out-there.

Chris: One of the cool things that Gearbox did, as a company, is early on in the production, they opened up the character concept creation to the entire company. So it didn’t matter if you were a QA guy, an artist, an engineer, or someone in production. They even opened it up to 2K. And you could literally submit anything you wanted, like, “the crazy plastic bottle guy!” for example. It didn’t matter what it was. But you would submit the character concept and you had to list out some of their abilities and some of them were insane. The best ones floated up to the top and they went into more prototyping. The very best of that group were the 25 that made it into the game. So it was some person’s wacky idea to have this sentient mushroom, you know this…combat botanist . And yeah! He’s actually one of the coolest characters in the game. I love it!
CGM: Why did they open it up to everyone like that?

Chris: Because they wanted to get a huge array of ideas. They don’t want to have on just one or two people working on ideas because then they would never get what they were truly looking for, which was just this massive amount of variety. And we keep talking about how there’s literally a hero here for everybody. It doesn’t matter if it’s a type of playstyle or if it’s a look you’re looking for; maybe you like fantasy games over sci fi games, or you like more realistic games. So there’s gonna be a character that’s gonna fit the aesthetic that you like and hopefully the playstyle that you like.

CGM: So the intentions was to make Battleborn approachable to every audience.

Chris: Absolutely. And I think it plays like that as well. I mean, it’s very accessible. It’s easy to pick up and I think a lot of that goes into how we have the leveling system. We have the Helix system where you can level up from 1 to 10 within a match. It kinda puts everyone on an equal playing ground, so you don’t get into a multiplayer match and you’re not playing people who have been playing it hardcore for three months and they’re super high level and they’ve got other stuff that you just don’t have as you enter the match. So you’re able to see that entire character’s progression within that one match and that makes the game feel very accessible. And everyone so far has been really reacting well to it.
CGM: Could it also be due to the genre mixing that went into it’s creation?

Chris: Gearbox is known for taking all these different genres and smashing them together make something that is truly unique. And the game itself was inspired by RPG’s and by fighting games and by MOBAs and by movies. I think you can see that, especially with the battle system. There’s a layered progression system above the Helix system where the more you play a character, the more that character would rank up, and you’ll unlock different skins for the character, you’ll unlock more choices within the Helix tree, so you can even further customise how you play that character. So it has a lot of those really cool RPG elements in it too.

CGM: Having such a broad draw of inspirations for the whole thing, did you ever find that a little restrictive in the kind of story you could tell that would be able to tie all those ideas in cohesively?

Chris: It was overwhelming at the start because there are so many characters. And there’s this kind of nostalgic feeling they were trying to achieve. I don’t know if you did this when you were a kid, but when I was a kid, I would take a giant box of toys, and I’d pour them out and I’d wind up playing with Transformers, G.I. Joes, He-man, all these crazy, different characters would be fighting together or against each other. It was just a really cool feeling. They wanted to kind of, evoke that with all these different characters. I’m pretty sure we’re achieving that by every time you jump into a match, you’re actually getting that kind of nostalgia because it’s all these different characters from different realities fighting together.
CGM: Was there anything that the writers thought was too far-fetched?

Chris: I don’t really think so. It was cool that they nailed down the premise pretty quickly. They wanted the characters, they wanted the last star story, and from that point on, it was putting together a really cool narrative and getting the gameplay to be as balanced and fun as possible. So far there hasn’t been anything that we’ve been like, “whoaaa! That’s too weird!” We want weird! Weird’s cool!

Chris: Lot’s of challenges, but that’s..that’s everyday. You know one of the challenges I think, is being able to explain the game to people. Because the game is hard to explain because there are so many different elements playing off each other.

There’s never been anything like it, and I know it sounds like a lame marketing thing when you say that, but as the guy that has to communicate this publicly…just play it, because then you know and experienced it, and just picking up the controller and playing it is just the best way to learn it. And just trying to explain it to somebody who hasn’t played it is like the hardest thing I’ve ever tried to do. 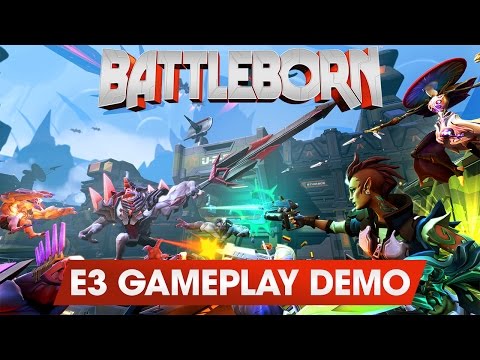 A lot of people dismissed it quickly, just thinking it’s this First Person MOBA because of all the colourful characters, and there’s now a trend you know, with shooters with colourful characters, which is awesome. And we are super excited to be a part of that movement. But the unfortunate thing about that is you can be quickly written off as being all the same. And ours is totally unlike anything you’ve experienced in not just all those other games, but also any game ever made, with so many genres thrown together.

Borderlands I  was a very similar situation. It was hard to describe to somebody “it’s this plus this plus this.” It’s like, that just didn’t do it justice, and then, you play it and you understand.

CGM: So what’s your favourite part of the game?

Chris: Right now, it’s the story mode. And it’s really coming together now. All of those personalities are starting to really come out. You heard Klease in the presentation? He was the one narrating for the most part. And that character’s incredibly funny. The whole thing is just awesome. The humor is coming out, the personalities of the characters are coming out, And I’m having fun just getting through the story, which is cool.

Chris: Orendi. She’s the little Chaos mage with the four hands. She’s super mobile, she does a tonne of damage, and the voice actress is the same girl that played Tiny Tina from Borderlands II.
CGM: Anything else you want to tell our readers?

Chris: We’re super excited. We’re lovin’ the response here, Gearbox has put a tonne of love into making all these characters, and the story that we’re telling, and if you get a chance to see it, get out there and come check it out!