An Interview with Swiss Army Man’s The Daniels

If first feature films are supposed to be attention-grabbing name-makers, then you’ve got to give Dan Kwan and Daniel Scheinert credit for making an indie that’s pretty much impossible to ignore in Swiss Army Man. The bizarre little film spins a yarn about Paul Dano as a lost n’ lonely soul on a deserted island who finds an unexpected friend in a corpse (Daniel Radcliffe). Even stranger, the corpse immediately starts farting with such intensity that he’s able to ride the body like a jet ski to the mainland. There the corpse begins talking and the duo become friends, allowing Daniel to spill his guts about a life lived in fear and isolation. Oh, and in addition to teaching Dano how to live and love, the dead body also shoots water from its mouth like a faucet, chops trees with its arms, and works as a compass thanks to a wandering boner.

So…yeah…Swiss Army Man isn’t exactly a conventional movie, and in addition to being goofily surreal it’s also a surprisingly touching and human story laced with genuinely unexpected darkness. It’s one of the most wildly unpredictable and original movies of the year and a hell of a calling card for the Daniels. The directing duo has made shorts and music videos for years and will likely continue to do so. However, Swiss Army Man is one of those directorial debuts that immediately gets the mind of any film fan racing, imagining what weird and unexpected movies will emerge from the creators next.

CGM got a chance to chat up The Daniels about their striking new feature on the eve of its Canadian release. We chatted about everything from the scatological origins of the piece to the challenges of directing a movie star playing a corpse, and the filmmakers’ bizarre desire to remake the Wayans Brothers’ comedy White Chicks as a thoughtful drama about the ills of society. Yep, it’s an interview as weird and unpredictable as Swiss Army Man itself. Quite frankly, anything less from The Daniels would have been a disappointment. 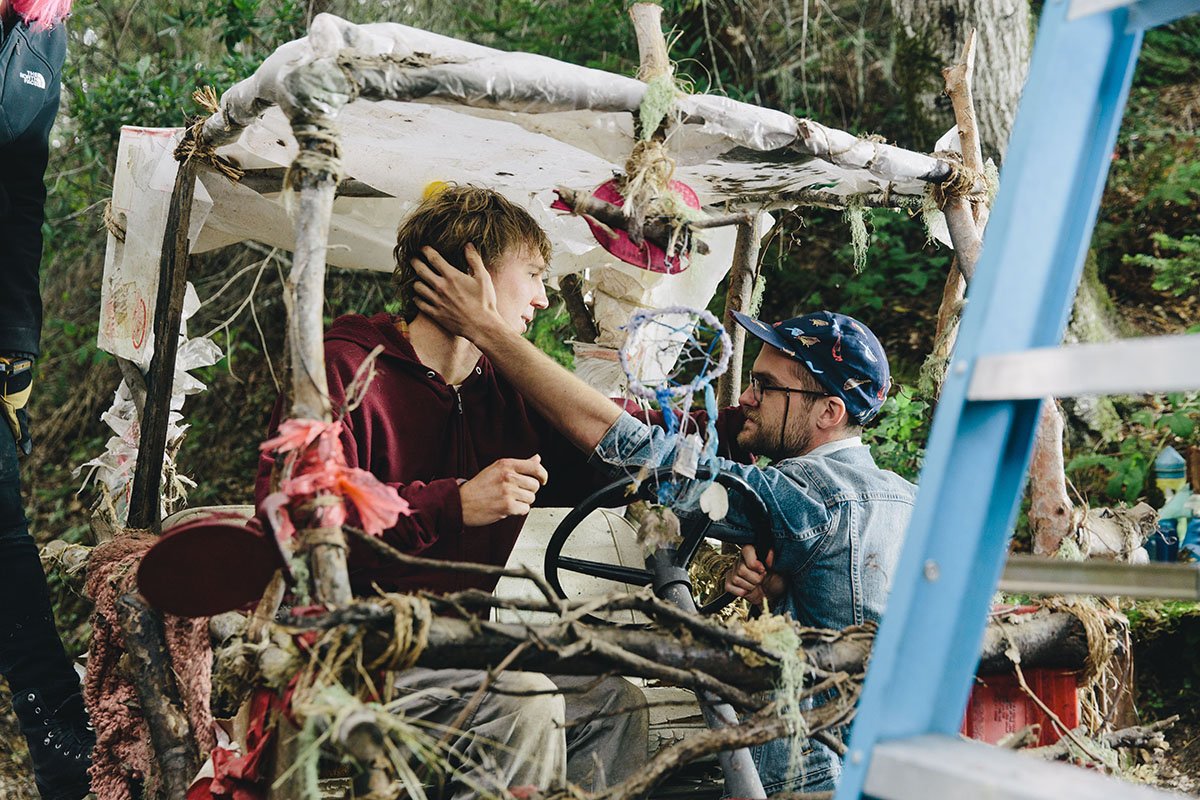 CGM: So, you two go by the Daniels and your actors are named Daniel and Dano. Coincidence?

Dan Kwan: Yeah, that mean for that to happen, but we embraced it.

Daniel Scheinert: It was something that we noticed in rehearsal and then after that, the key thing was making sure that everyone was careful about what name they said on set.

DK: You couldn’t shout out, “Daniel!” That wouldn’t do anyone any good. So we had to go with nicknames and that sort of thing.

CGM: Where the hell did this idea start? I’d imagine it all began when you learned about corpses farting, but perhaps I’m wrong?

DK: It’s one of those things that you learn about in middle school and it fascinates you. You can’t help but laugh.

DS: Yeah, like the Darwin Awards. There was one about a guy who asphyxiated himself in his own apartment from farting and then that continued after he died. That’s the sort of thing that’s funny when you hear it the first time and then the more you think about it, it becomes sad and tragic. So we wanted to see if we could create a story with that many layers of feeling.

DK: Could you make someone cry with a fart? We thought we could. That was a big inspiration (Laughs). Then obviously as you write it grows and changes. The core idea is very real, but something that no one wants to confront. Originally, in our first script, the character of Hank found this farting corpse who he thought would be his salvation. We kind of think of it as to him staring into a meaningless, existential void. Like, why am I being confronted by this image? We just found that so sad and funny and bizarre. We couldn’t shake it. That idea just kept coming back into our discussions. Eventually we realized we had to make the movie. Even, you know, against our better judgment. (Laughs) 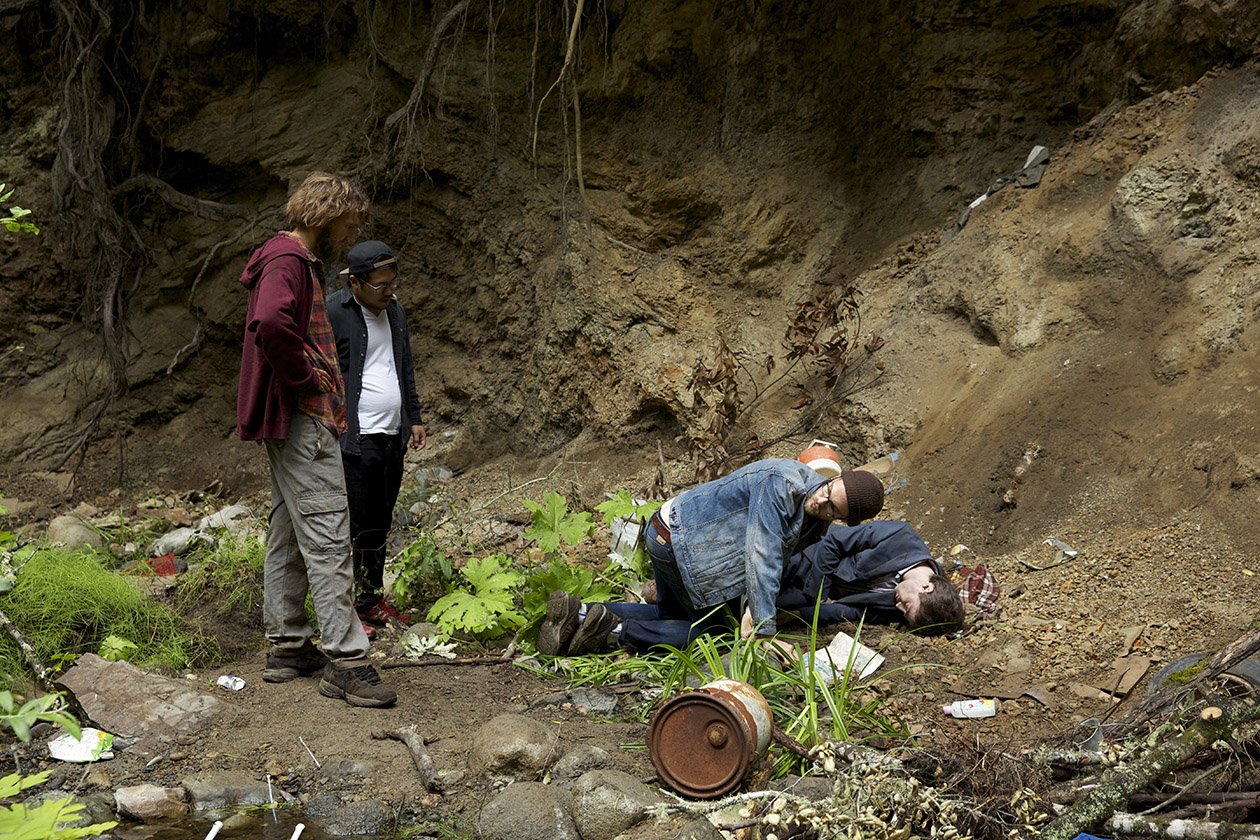 CGM: What was it like to show the script to people? Were actors even willing to look at it?

DK: Well, we were lucky in that the first people we showed it to are very used to us. We have a pretty tight group of collaborators, our producer, our cinematographer, most of our crew. They are people who know us, so they weren’t too surprised. We talked about it for years. So it didn’t seem that strange by the time that we showed them the script.

DS: Then when it went out to actors, it’s not like we were shocked if someone turned it down. Normally it was funny. We’d all laugh and they’d say it was a good idea, just not for them. So it was a very positive experience to send that around.

CGM: Yeah, I’d imagine you didn’t have to worry about actors saying, “Ugh, I just read six scripts exactly like yours.”

CGM: Did you write this for Paul Dano? Because it’s kind of hard to imagine anyone else.

DK: Actually no. We wanted to keep our options open when we wrote the script. We weren’t sure who would even be interested in being involved with this crazy thing. In fact, for a while we were willing to play the two roles ourselves and make it on a very small budget. If that’s what it took, we would have done it.

DS: But then when we met Dano and got him on board, we did re-write it specifically for him. He’s such a talented actor and can do certain things so well, that it seemed silly not to take advantage of that. So no, we didn’t write it for him at first, but yes we did write it for him once he was involved…if that makes sense (Laughs). 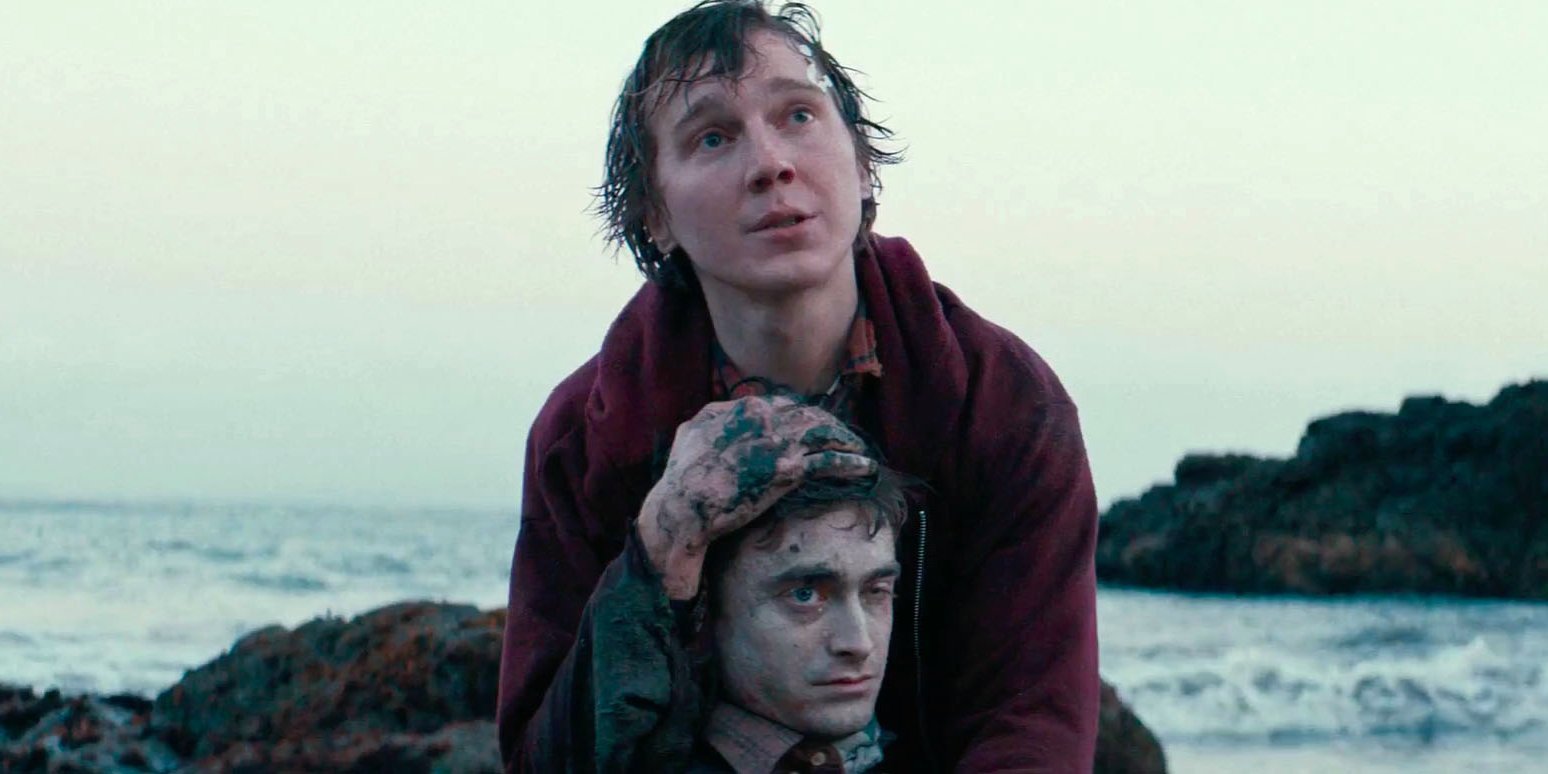 CGM: What was your approach to directing Daniel Radcliffe? Because it’s not like you can say, “Hey, that’s not how a corpse would act.”

DK: It was really interesting, actually. They way the three of us approached it together was to give him limitations rather than specific directions. We would tell him, “At this point you can only move your mouth” or “Here you have a little more movement in your face.” He really responded to that challenge and loved it. He was very interested in throwing himself into the part and throwing himself around physically. It was definitely unique and he was with it 100%.

DS: Yeah and that got complicated because we shot out of order. So we’d have to constantly be reminding ourselves just how much he could do at a certain time. Sometimes we jump from a scene where he was very animated to a scene where he could barely move at all. It was tricky to keep in our heads, but a lot of fun.

CGM: This is very tough to talk about, but I really loved where you eventually took the story. It’s quite unexpected, because on a certain level this plays into that genre of “lonely loser finds love and happiness” comedies, but that all changes in the end and the movie becomes something darker and more perverse. I really admire that and think it’s a better movie for it.

DK: Thanks. It’s nice to hear you say that because quite often we hear the opposite, that we lose people with that ending. We thought it was important though. We wanted to explore all of the deeper aspects of this idea, not just the fart jokes. The big joke was that the movie even exists. After that, it was all about the humanity. You know, it’s really an existential fart drama (Laughs)

DS: Without getting into spoilers, it was an effort to shake people out of their comfort zone. As funny and silly and warm as the story can be, it is kind of dark and the character is damaged. There’s a tragedy at the core and it would be a mistake not to acknowledge it. It would be too easy to ignore it. We spent the most effort on making this an honest film. We would take a step back and laugh, thinking, “I can’t believe anyone let us make this.” But then we’d dive back in and take it very seriously. Hopefully that’s how it plays for an audience as well. We’re very stubborn as filmmakers. When we set out to make something, we don’t want to compromise and we want to include all of our ideas no matter where they come from. Hopefully it creates an interesting tension. 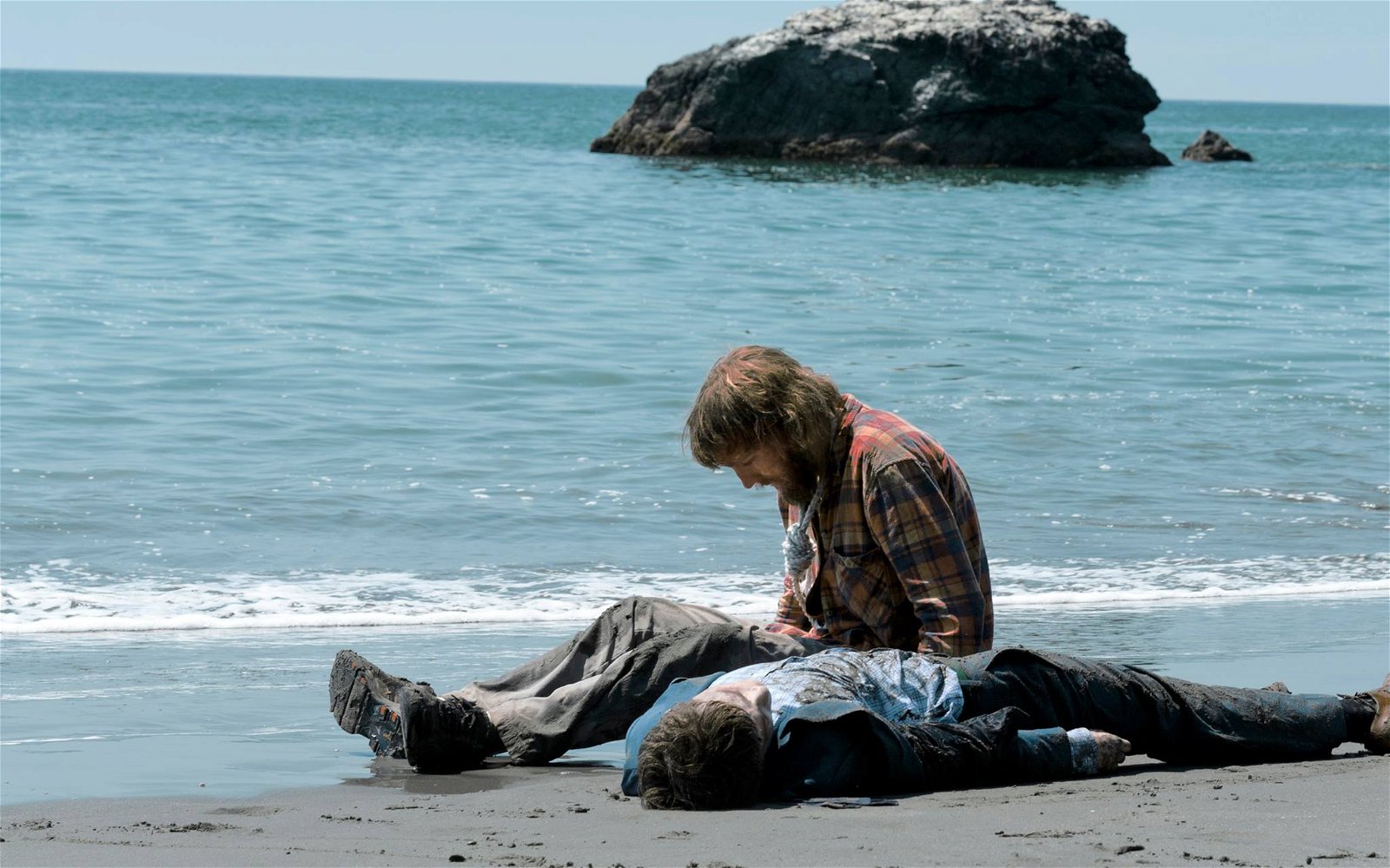 .
CGM: Finally, I have to ask: is it true that you guys want to remake White Chicks?

DK: Yeah, absolutely, but we want to be more like Requiem For A Dream or The Departed. It’ll be more of a psychological thriller where the guys lose their identity and fall apart. We imagine a scene where Marlon Wayans is stripping off his white girl make up in the mirror and you can see a tear roll down his cheek. But you aren’t certain if that’s from the contact lens or because he’s falling apart.

CGM: Oh so you’d actually want the Wayans Brothers to be in it.

CGM: Sorry, sorry. I didn’t mean to be rude.

DS: (Laughs) Hey, don’t fuck with our vision! I mean, obviously it started as a joke. When you go around to studios and producers now, everyone wants to know what franchise or property you’re interested in. So we want White Chicks.

DK: It seems incredibly possible that one of the producers would be interested in making a sequel. It started as a joke, but when you think about the themes, it actually touches on a lot of very contemporary ideas about race and gender and privilege in the 21

century. There’s a lot of meat there.

DS: We like to start with a profoundly stupid idea and then treat expand it into something more serious.