We Happy Few is now officially scheduled to come out for PlayStation 4, Xbox One and PC.

Gearbox publishing, partnered with Compulsion Games, has just announced that that We Happy Few will be hitting consoles and PC on April 13, 2018.

The eerie, paranoia driven title will launch worldwide in April and will include a plethora of new content. The title will ship with a full-length story campaign, three playable characters, and more than 250 unique NPCs.

Gearbox is touting the upcoming release of We Happy Few as much grander in scale that what was envisioned back when the game was first shown off during its Kickstarter days.

Guillaume Provost, Studio Head of Compulsion Games had this to say:

“Our team was humbled by the initial public reception to We Happy Few, and delighted to have this chance to make it bigger. We’re longtime fans of Borderlands, and we’re excited to be part of a line-up that also includes games like Homeworld and Fortnite. Gearbox believed in us from the very beginning, and we think this partnership will make it possible to create the game that our community expects.”

Additionally, Steve Gibson, CEO over at Gearbox said this on the matter:

“Compulsion Games has an amazing game vision and it’s an honour for Gearbox Publishing to contribute to the effort.”

Those who pre-order We Happy Few for $76.24 CAD or $59.99 USD will receive a 15 per cent discount at participating retailers.  Additionally, pre-order holders will also receive a special ‘Jolly Brolly’ parasol item. 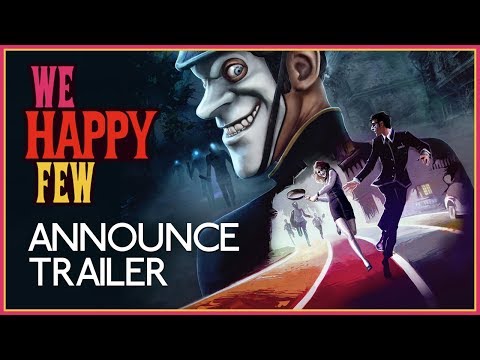 Customers who pre-order through Steam, GOG, or Humble Bundle will gain alpha access to the title. Windows 10 customers will also get access when the title becomes available to pre-order. Finally, those who pre-order the game on PlayStation Network will also receive an exclusive theme.

File Under: We Happy Few