Hi-Rez brings Hand of the Gods to Console

Hi-Rez Studios has announced today that their collectable card game, Hand of the Gods, is receiving a closed alpha test on Sony PlayStation 4 and Microsoft’s Xbox One. The CCG has previously had a closed beta test on PC and console players now have a chance to try out the game for themselves. Sign-ups for the closed alpha are available now.

Hand of the Gods is a strategic collectable card game that features many of the gods and goddesses of SMITE in a new battleground. Players can create decks from their favourite SMITE pantheons and then face others in a strategy game. Drawing cards from their decks, players summon units onto a grid board and maneuver their units around the board hoping to destroy their opponent’s summoning stone.

You can see the announcement trailer for the closed alpha, below. 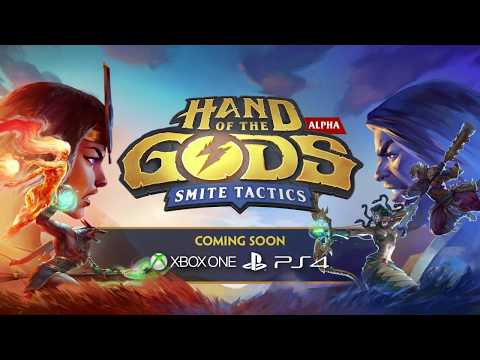 We asked a few questions to Hand of the Gods Lead Game Designer, Scott Lussier, about the upcoming closed alpha.

CGM: Why the decision to bring Hand of the Gods to consoles?

Scott Lussier: We knew very early on in the development process that bringing Hand of the Gods to consoles could happen based on the success that SMITE and Paladins have seen on those platforms. This realization was extremely exciting for the entire dev team, and we made sure to always design with consoles in mind. When you look at the Xbox Live Store you don’t really see any free-to-play turn-based strategy games or collectible card games for that matter. Fortunately Hand of the Gods is a perfect blend between these two genres and I can’t wait to start the closed alpha!

CGM: What can players expect from the console Hand of the Gods experience?

Scott Lussier: One of the challenges of bringing a collectible card game to consoles was ensuring that playing the game felt fluid. In order to achieve this goal we had to add brand new functionality to ensure that players could make their actions as fast as they wanted to. In addition to this functionality players can expect to see the Gods they know and love from SMITE enhanced by the power of Unreal Engine 4. If you’re a fan of mythology, card games, and turn-based strategy you’re going to fall in love with Hand of the Gods.

CGM: When should fans expect an official launch of Hand of the Gods on consoles?

Scott Lussier: Right now we are focused on getting Hand of the Gods into closed alpha on consoles. Once that goal has been achieved we will then start to consider a date for beta, but there is currently no set date for launch.

CGM: Will there be any cross-platform play between PC and Consoles?

CGM: Is there a chance for other Hi-Rez IPs to be included in Hand of the Gods?

Scott Lussier: It’s funny you ask that because just yesterday I was brainstorming different ways to include Pip’s chicken from Paladins into Hand of the Gods.

CGM: Do you believe that Hand of the Gods can stand as a pillar of Hi-Rez Games?

Scott Lussier: I do, yes. When developing a game inside of Hi-Rez Studios it is imperative to listen to community feedback and/or general feedback from the development team. Hand of the Gods is no different. In fact I would say we crank it up a notch when it comes to listening to the community. Inside of the HotG Discord, I asked them to create a specific channel called “Ask Gandhi.” This channel is used to bridge the gap of communication between myself and them.

Additionally, I am blessed to have one of the most badass and passionate development teams in the industry.

CGM: How has the transition of SMITE to a card game been when considering that the game started as a MOBA?

Scott Lussier: Re-imagining SMITE as a collectible card game has been one of the most amazing experiences in my life. SMITE and Hi-Rez Studios enabled me to live my dream of being a Lead Designer. My personal goal is to one day make the studio, the SMITE development team, and the entire SMITE community proud.

For any players eager to get their hands on Hand of the Gods early, it is going to be playable at PAX West. There, fans will have the option to chat with developers and compete in a $5,000 tournament with free entry open to all attendees. The winner of the tournament will not only receive the cash prize but will also receive two free tickets to the Hi-Rez Expo.