Polyarc, the creators of Moss, have released new footage of unseen levels and gameplay for the first time since E3.

During the video, the PlayStation Blog demonstrated various gameplay mechanics. Combat seems to be simple but players will need to take advantage of the enemies weaknesses to gain the upper hand. The PlayStation Blog made use of the PlayStation VR headset in their gameplay video to showcase how well VR works with Moss. VR and motion controls will have an impact on the game and its large array of puzzles that cover the levels.

Rich Lico, Polyarc’s Lead Animator said, “I wanted to have her (Quill) communicate with the player in more authentic ways, like how your friend might communicate with you,” Lico went on to say, that with this concept in mind it “led to things like using sign language, and having her represent how the player might be feeling — if the player is upset at something, she might kick that thing the player is upset about. You project who you are onto the character, but she also defines herself separately, and it helps build that realism.” 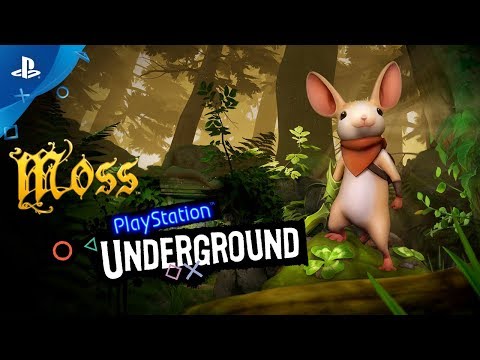 Watching the video, it is clear that physical movement will have a large part to play when going through the game. Players will need to look around and analyze their surroundings with the VR headset and find ways to solve the various puzzles. Players will also need to make use of their controller’s motion sensors to help them navigate through the obstacles that lie in their path.

While Moss is on the way, Polyarc announced an official Moss iMessage sticker pack. Fans of Moss are able to send 21 different animated Quill stickers to anyone who uses the Messages app. The Moss Stickers: Quill app is available for purchase on the app store for $0.99.

Liked this article and want to read more like it? Check out  Nathan Shubert’s Moss E3 2017 Preview – VR is Magical Once Again and CGMagazine e# 2017 Best of Show Awards (Part 1)