The Escapists: The Walking Dead Announced

Team17 and Skybound Entertainment are teaming up to work on The Escapists: The Walking Dead.

The combination will allow players to play as Rock Grimes. The player must keep the group safe from zombies in each area and keep them alive.

Some group members will include original comic book characters and the game will follow the comic book closely.

The game will be released sometime this year for Xbox One and PC.

More information is available below.

Team17 have today unveiled that they are developing and publishing The Escapists: The Walking Dead, a new game in collaboration with Skybound Entertainment.

Merging the award-winning, smash-hit, indie game The Escapists with the worldwide phenomenon that is The Walking Dead, Team17 have taken the very best of both worlds and are now providing players with the opportunity to play Rick Grimes as he takes on hordes of zombies let loose upon the world.

In this unique game, recreated entirely in the charming 8-bit pixel art style of The Escapists, Rick is in charge of a band of survivors featuring many of the original comic book cast. He must secure the safety of the group by seeking out a safe escape route from each area, and manage several dangerous tasks to keep as many of the group alive as possible. The game faithfully matches the timeline of the comics and so as the player makes progress in the game they play through locations that mirror the progress of the band of the survivors taken from the award-winning comic’s epic story.

Daniel Murray, President at Skybound Entertainment said, “Team17 presented a creative plan to blend The Walking Dead into The Escapists and our response was simple. When do we get started? The Escapists is a charming example of a single creator’s vision come to life. We are excited to offer fans of The Walking Dead something different and The Escapists: The Walking Dead is just that. A playful interpretation that we believe fans of great games in general will love.”

Debbie Bestwick, Team17’s Managing Director added, “With well over 600,000 units sold, the award-winning The Escapists is one of the hit indie titles of 2015. Masterminding your escape from prison is hard enough but how can we make it harder? Zombies. Remember poor Rick Grimes trying to escape hospital, organise life at a farm or hold up in an abandoned prison? A little bit of awesome 8-bit pixel love later and BOOM! It is great to partner with Skybound and The Walking Dead and we are really excited to ‘escapify’ the amazing, rich and sinister world of Robert Kirkman.”

Team17 will be globally debuting the game at the Walker Stalker Fan Fest in Petco Park, San Diego, California during the 10th and 11th July. Attendees, roamers and fans will be able to get exclusive first hands-on playable with Rick Grimes in the Harrison Memorial Hospital level.

The Escapists: The Walking Dead is scheduled for a 2015 release on Xbox One and PC. 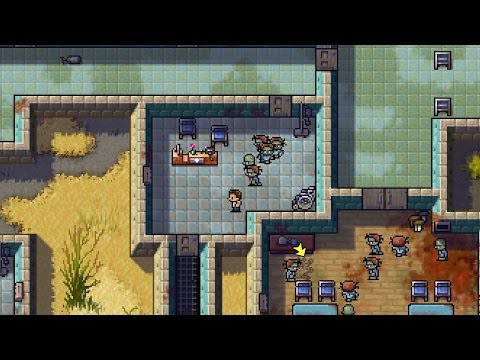