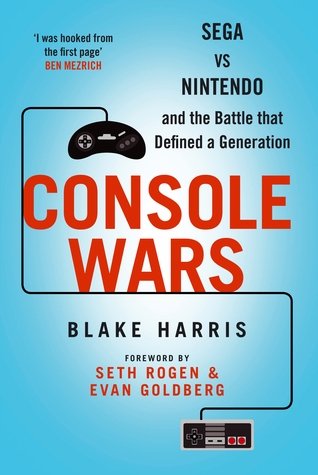 For a relatively young industry, gaming has a lot of stories. Not just records of numbers and people, but rather fables of corporations and revolutionary ideas. Some don’t always go according to plan. There are legends like the rise and fall of Atari, which resulted in the infamous burial of hundreds of ET: The Extra Terrestrial cartridges. Or the story of how a Japanese card company picked up the pieces of a broken industry and created an empire. Then there’s the legend of a small console manufacturer that wanted to take that empire at any cost. That’s what Console Wars is all about.

Written by Blake J. Harris, this book chronicles the rise and eventual demise of Sega in the 16-bit console war. It mostly follows Tom Kalinske, the man who revived Barbie, and helped create He-Man during his time at Mattel. It chronicles every move he made, every fumble from the company and almost every obstacle between Sega and videogame dominance. While the story is mostly about Nintendo and Sega, almost placing the Big N as the antagonist, Sega’s biggest enemy was itself.

The company had a philosophical divide between America and Japan. Every idea from the West  was a fight with the East and vice versa. Eventually, the struggles were too much for the company to sustain success for an extended period of time.  Along the way there are interactions with colourful characters, all infused in a semi-realistic version of what really happened. This was a blood battle where men in suits sat in the war room anxious to press the big red button.

The story ends in 1996 when Kalinske leaves the company as Sega’s power starts to fade after taking a majority of Nintendo’s market share, but almost anyone who owned a console in the 1990s know the story. It’s almost like playing Halo Reach–I started out knowing the outcome, but I still got invested and forgot that it doesn’t end in the Dreamcast 2.

Despite the bleak outcome, the book is still entertaining. Harris wrote it after conducting around 100 interviews. He deciphered what was true, what was pride and what was fuzzy memory. A lot of research was put in to help fill out some holes, and he sprinkles in some good old-fashioned fiction to keep everything entertaining. It makes for a very informative story that is still fun to read. That will help for the movie adaptation that Seth Rogan and Evan Goldberg are writing.  The only problem is that these fictional moments have a tendency to be a little too over the top at times.  It takes away from the realism of the situation, and it feels synthetic. It’s not a huge issue, but it can be noticeable at times when characters are too bombastic.

Even with its issues, Console Wars is something any gamer should read. As a long time Sega fan, it was fun to see how far the company went before completely imploding. The fact that there won’t ever be a console war as personal, intense, and completely over the top, makes the stories that come with it that much more special. Just like many of the legends passed down from console generation to console generation, Sega’s brief time on top showed that nothing stays the same in the gaming industry. A company with a vision and just enough money to see it through can topple the tallest giants and shake the industry’s way of thinking. After all,  in the videogame industry the name of the game is the game.

Even with its issues, Console Wars is something any gamer should read. As a long time Sega fan, it was fun to see how far the company went before completely imploding.
REVIEW SCORE
8
File Under: Mario, Nintendo, Sega, Sonic the Hedgehog