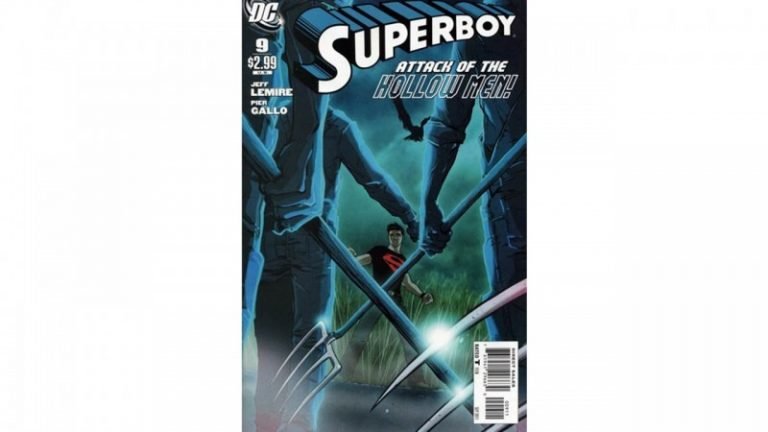 All these years, unbeknownst to Smallville’s resident heros and villains, has been a deleterious monstrosity of soulless puppets. Mastered by the enduring and condemnable Eben Took. It seems Superboy may have happened on a redoubtable opponent; one that apparently holds an endless grudge toward the Kent family.

The subsurface town and inhabitants make this one eerily terrifying issue. Zombi-esq lifeless-faced-clay-people farming as though in the early 1900’s is bizarre and unique. Eben Took, in his butcher shop apron is menacing enough without the fact that he has the power to tenderize Conner and Krypto.

I am certainly fond of the turn Superboy has taken, from a childish comic, to a more serious superhero storyline. This issue and the next apparently appear to be wrapping up the inaugural arc that began with the Smallville crop failure.

The art accompanies the dialogue nicely, and creates an easily readable comic. The cover was especially well done, and portrays the vileness of the Hollow Men impeccably. Pitchforks are always frightening.

Superboy 9 was especially well done, and portrays the vileness of the Hollow Men impeccably. Pitchforks are always frightening.
REVIEW SCORE
6
File Under: