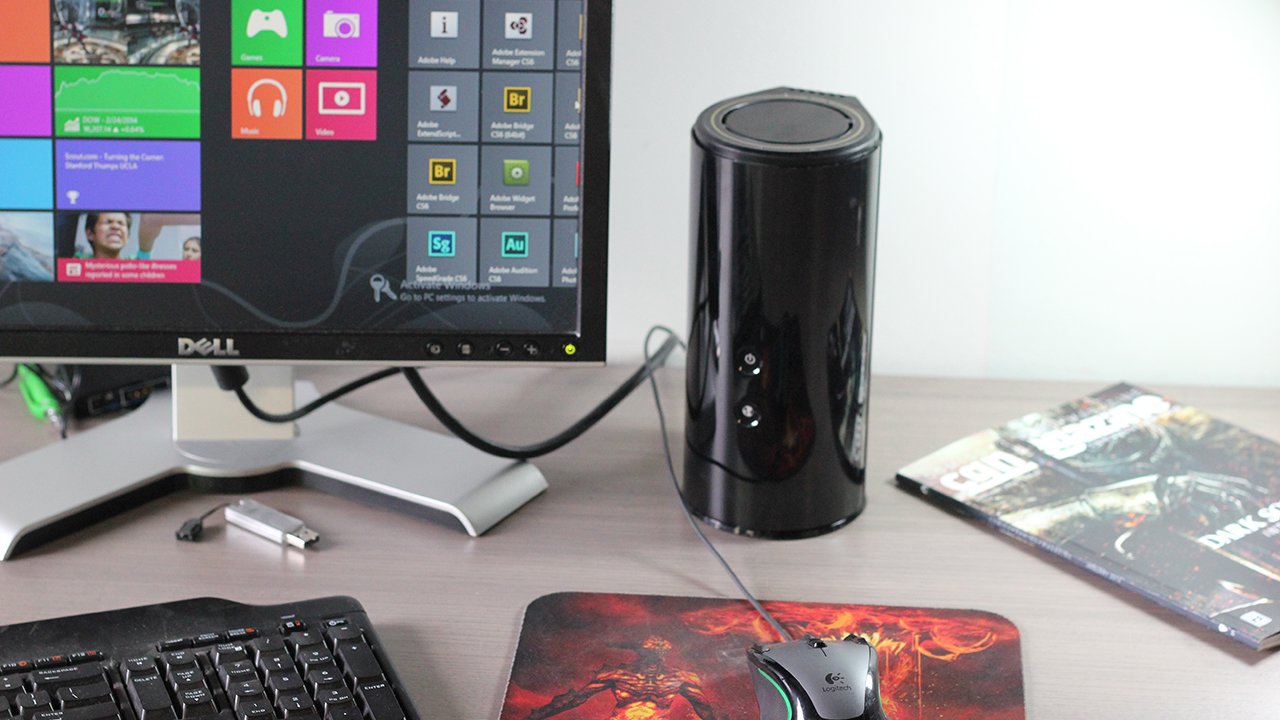 Wireless routers are often thought of as an install-it-and-forget-it device. Many people settle for the low end offerings, as meet most general consumer needs. However, if you are an enthusiast of gaming or online media, it performance matters a lot more. The D-Link DIR-868L is a router for more demanding users, with performance that satisfies media producers, or competitive players, but it comes at a price.

The design of the router is a bit different from others. Rather than being the traditional rectangular box, D-Link have opted for a glossy black cylinder. The back of the router has a USB 3.0 port, WLAN connection and the standard compliment of gigabit Ethernet ports, somewhat of a necessity for any router being used for media or gaming. The front is minimal with a lights for power and internet status. Overall the look is elegant, with it being a welcome addition to most work areas, fitting right in with most modern technology.

Getting the router setup with a new or pre-existing network was a pleasure. It’s a simple process of plugging into the network and running the setup utility. The setup guides the user though the full process, making the total setup, including security for the network, taking a total of around 10 minutes.

Bandwidth, and the ability of a router to handle internet gaming even with heavy traffic is an important element when looking for a new router. The need for the new wireless technologies such as 5Ghz is very important. With more and more people using wireless in their homes, the 2.4 Ghz band has become rather congested. This congestion leads to a drop in internet speed along with lost matches. The solution is ensuring your devices use the new 5Ghz band, which is less crowded but lacks the range of  2.4Ghz. It’s is a much faster and more reliable option when looking at wireless connectivity.

The fact the DIR-868L can go up to 1300Mbps on the 5Ghz spectrum makes the wireless comparable to the gigabit wired in peak situations. In our tests we found file transfers when using the 5Ghz spectrum to work well. A 100MB file transferred in just over a minute on both wired and wireless. Similar quality was also seen when testing live streaming of a PS4 title on twitch, quality was consistent with an acceptable number of dropped frames in the overall 30 minute test.

The need for fast Ethernet and steady speeds is essential in online games where timing is key or when streaming a match on twitch or another streaming service. I am happy to report with our heavy testing of the router, we did not experience any slowdown or dropped connection. Call of Duty: Ghosts multiplayer gave little to no issues. Even when the system (PS4) was on wireless. Even more impressive was the ability to stream gameplay to twitch and have an acceptable performance from the wireless setup. It should be noted that although wireless steaming was possible, CGM would always recommend a wired connection for streaming to ensure optimal performance.

Despite its decline in recent years, LAN gaming is still something many players enjoy. This can sometimes be a challenge with too large a number of computers and devices connecting all at once. I am happy to report that LAN gaming was also feasible with the DIR-868L. After throwing classic LAN titles at the router, it was a pleasant surprise to see it run without issue. Games such as Quake and Unreal Tournament, were playable even with over 10 computers connected. Even when testing computers on a wireless connection and there were still no issues. It is safe to say the router is a fantastic LAN gaming choice for the people still interested in that style of play.

Overall the DIR-868L is a pleasant surprise, and although is a higher end router the price tag is justified with the features and flexibility of the device. With few slowdowns or real problems, it is hard to not recommend it for anyone interested in gaming or internet media. Speed and range make it a great choice for people that are forced to rely on the wireless option, but with the addition of Gigabit connections, it allows for the true enthusiast to achieve the speeds they may need. If price is no object, the DIR-868L is a router that is hard to beat although may be better suited to the enthusiast.

The fact the DIR-868L can go up to 1300Mbps on the 5Ghz spectrum makes the wireless comparable to the gigabit wired in peak situations.