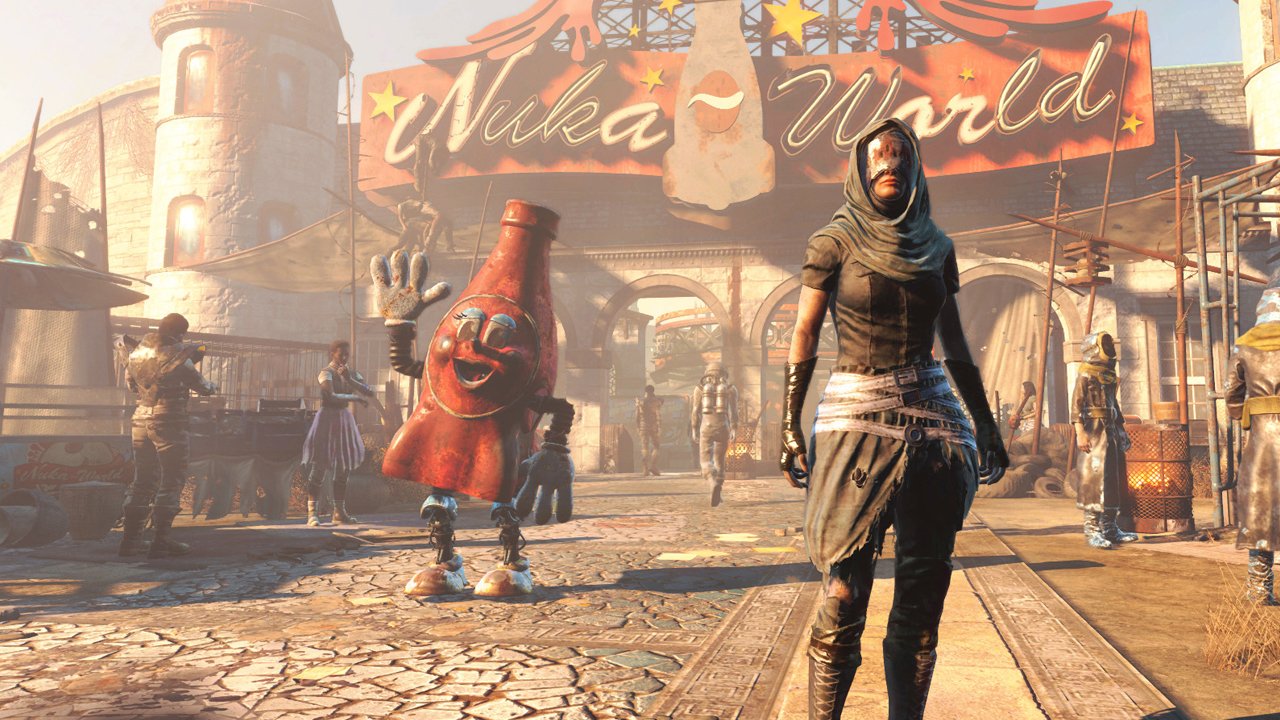 At long last my perpetual nightmare has ended. It’s been quite a journey; last November I thought Fallout 4 was a pretty good game, but as I continued to play it, I grew to hate it more and more. I deleted it from my hard-drive, forgot about it, only to yell, “please, no!” every time a new piece of DLC was announced. When Nuka-World was revealed, I had virtually no interest in it—despite Nuka-Cola being one of my favourite things about Fallout—and not just because I supposedly hate everything, but because so far every piece of DLC for Fallout has been boring, hollow and varying degrees of functional. Nuka-World is no exception. It’s a meaningless journey through an empty theme park devoid of any real character or substance.

Nuka-World begins with your character getting tricked into going to the famous Nuka-World theme park under the pretense of saving some guy’s family that are apparently being held captive there. This sparked a bit of curiosity in me at first; given the obvious parallels to Disneyland, I thought maybe Nuka-World would be under the control of some insane Happy Happy cult and this would be the beginning of exposing the seedy underbelly of the Nuka Machine.

But no, as you head in (in the dead of night no less, so any chance at a sweeping establishing view of Nuka-World ala Jurassic Park was completely wasted) you are told that this was all a ruse by the Raiders and you proceed to take part in the world’s most boring Thunderdome and kill the leader of the Raider gang, which by Wasteland rules apparently makes you the new leader. As the new leader you’ll have to head through the various themed parks in Nuka-World (Cowboy Town, Space Land, Kiddie Park, etc) and reclaim them, assigning one of the three raider gangs in your control to that location.

Much like Far Harbor, this is a decent idea conceptually. Unfortunately it suffers from all the same problems that plague every square pixel of Fallout 4. For starters, the entire main quest forces a “bad karma” narrative onto the player. It really feels like Bethesda doesn’t understand the RP aspect of an RPG (and with how poorly Fallout 4 performs, they barely understand the G as well). I’ve been playing my character mostly good, so initially I thought I would be given the option to unite the Raider gangs and turn them to the side of virtue. But no, all you can do is either kill all of them (the supposed “good guy” choice), or pick one faction to support and just go with it. 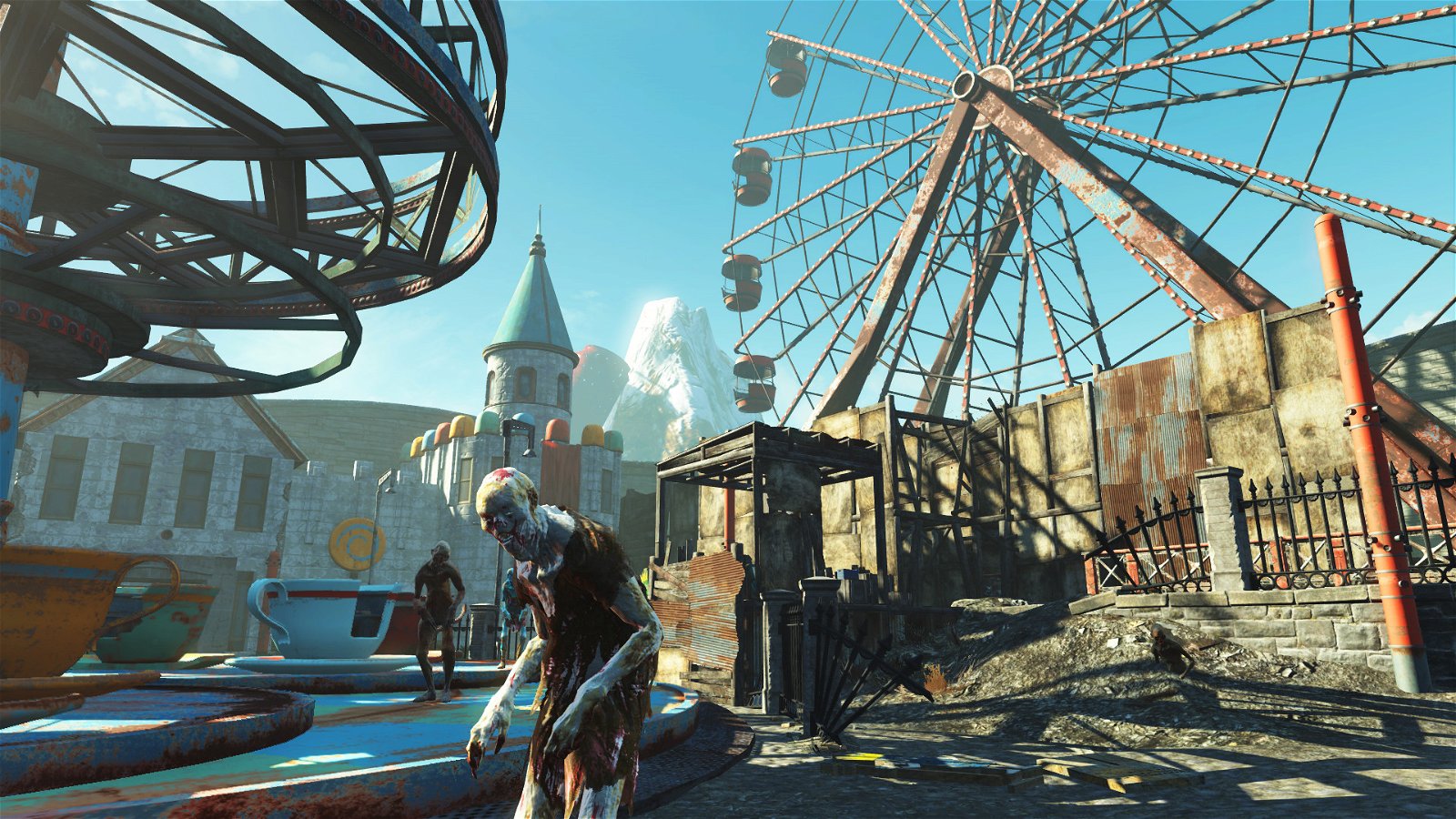 Not that it matters since each of the three factions is completely indistinguishable from the others. Dynamism is something I’ve really come to appreciate in games, and Fallout 4’s complete lack of it further proves how dull the game is. Of the three raider gangs, you can choose The Operators, who claim to value skill, stealth and caps above all else; The Pack, who value strength, violence and death; and The Disciples; who also value strength, violence and death.

Initially, I couldn’t understand why Bethesda didn’t go the route of using The Operators for anyone playing a stealth build, The Pack for anyone who’s playing a strength build, and the Rust Devils (the Raider gang introduced in the Automotron DLC) for anyone playing an intelligence build. It gets even more apparent how meaningless these “factions” are when each of them gives you the same, repeatable, throw-away quests that all involve either killing a small group of guys, killing a single guy, or enslaving some “priority” guy. None of them give you any quests that involve their particular set of skills or themes. Even when you take over a part of Nuka-World and assign a faction to it, there’s virtually no distinguishable difference to the park; nothing that suggests that faction’s mark on the territory, or that they’ve claimed it and turned it into their own personal camp.

That lack of dynamism finds its way into the gameplay as well. Taking over each part of the park is just a mindless slog of blasting your way through enemies with no real room for creativity or freedom. As I said in my Automotron review, I built my character as a melee/stealth build and there was no situation in Nuka-World that I could approach in a tactical, stealthy way. In the Wild West land, I had to clear out a bunch of insects that had sprung from the ground at certain points, and while they were weak enough to handle with a sword, it eventually boiled down to just running around and swinging wildly. Space Land was filled with robots so stealth went out the window, Kiddie Land was filled with ghouls and the Safari Zone was filled with a smaller version of Deathclaws called Gatorclaws (I’m sure you can figure out what they were) and it just got to a point where dealing with all of it became less tedious if I just put on my Power Armor and ran through with a minigun.

The other major issue Nuka-World has is how it equates difficulty with an overabundance of enemies. In almost every place save for the Safari Zone and the Nuka-Cola Bottling Facility, there was such an overabundance of turrets, robots, insects, and ghouls that combat never actually felt challenging, hence the aforementioned Power Armor/Minigun combo. When I first approached Space Land, I truly wanted to believe I could sneak past all the robots, access some main terminal and reprogram all of them to be on my side, further bolstering my control of Nuka-World. But with the sheer density of robots and laser turrets around every corner, there really was no way to approach it other than guns a’ blazin. And when you realize that 100% of Fallout 4 is just that, there’s really no need to pay $30 extra for more of the same.

I had to go online to figure out the way to end Nuka-World since the game does nothing to actually lay it out for you (you have to go to the Commonwealth and take over three colonies for the whichever Raider faction you support, since apparently you can do that now). And of course, Nuka-World is pretty glitchy. While not as egregious as Far Harbor was, there were a few moments of framerate drop, tree textures spasming out of control, and the game actually crashed on me five times. 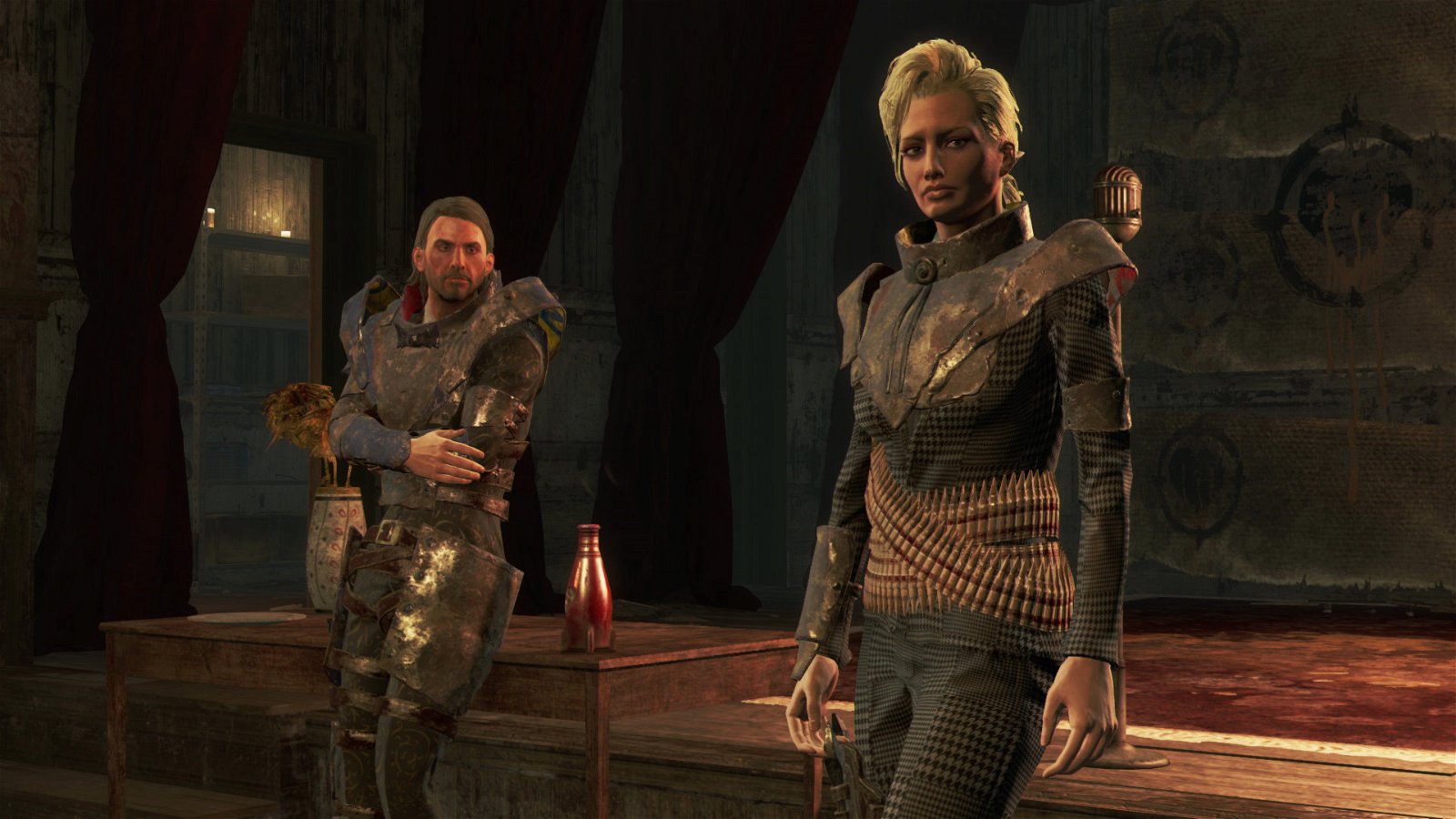 In a lot of ways, I think Nuka-World is a perfect representation of the thing it’s trying to mimic. It gives the illusion of being a magical, fun-filled world but once you peel back the curtain you see the hollow, money-making machine that lies underneath. The only good thing I can say about Nuka-World is that I no longer have any reason to ever install Fallout 4 ever again, though it’s ghost will haunt my library forever.