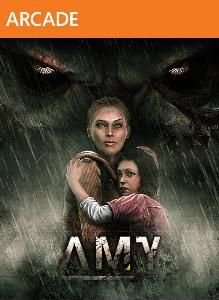 The Horror Is In The Design

Amy is one of those games full of regrets. As a critic or reviewer, there is regret at seeing something with genuine good intention and potential go completely off the rails. As a developer or publisher there is the regret of seeing all that hard work met with negative reception. And of course, as the player, there is regret if you spent money on what you were hoping to be a piece of thrilling, escapist entertainment that actually ends up feeling more like a frustrating day at work than a way to unwind at the end of the day. The year is young and yet Amy has managed to carve out an early lead as one of the worst games of 2012.

An Exercise In Excess

The story of Amy is a simple one that has obviously been developed with an eye for future instalments to flesh it out. Lana, the heroine, is escorting a mute, eight year old girl named Amy who is being pursued by some large, evil corporation intent on exploiting her as yet, unexplained special psychic abilities. So obsessed with recapturing Amy is this corporation that they somehow turn an entire city into zombies and then send in their own troops to try and recapture the girl. Lana and Amy must now try to get to the safety of a hospital while avoiding said zombies and troops. It all goes downhill from there.

The chief way to describe Amy’s fatal flaw is that Vector Cell, perhaps encouraged by the positive reception to Dark Souls and its predecessor, went back to the old school, challenging survival horror of the 90s, and ramped up everything. If Resident Evil had a challenging checkpoint system, they were going to make Amy’s merciless. If Silent Hill had a clumsy main character in combat, Amy’s protagonist Lana suffers from Parkinson’s disease, and if Resident Evil 4’s most challenging moments were escorting the President’s daughter, Amy’s entire premise is focused on escorting an even more helpless little girl. Elaborate puzzles repeat ad nauseum over six chapters, and you’ve seen everything the game is going to throw at you by chapter two. The puzzles themselves fall victim to “adventure game logic” where the solutions might have made perfect sense within the design bubble of the studio, with everyone talking amongst each other, but average players will be scratching their head as to how the solutions had any logic in the context of the real world. And then there is the deliberate, infuriating level of difficulty.

While it’s admirable that Vector Cell wanted to create a game that was challenging, they forgot that there still needs to be an element of fun involved. Amy, unlike Dark Souls does not encourage players to try again because of a sense of progression despite the brutal treatment. Instead, Amy seems to feel that if the player is angry, frustrated and genuinely not enjoying themselves anymore, then it has accomplished its job and has 1upped even Dark Souls. The biggest difference lies in the fact that Dark Souls gives players short check points, and encourages experimentation through death. You are supposed to learn something from your death, then go back, try something different and see the various approaches you can take to your situation based on your play-style and character build. Amy, being an adventure game dressed up in a horror costume, has only one solution to most problems, and does little in the way of encouraging experimentation to find that solution. The checkpoints are so far back that a sense of dread overcomes the player about making any mistake and being forced to trudge back through the series of unpleasant obstacles only try another solution that may lead to instant death. This, of course, leads to repetition which in turn leads to a complete bleeding out of any tension or fear the game tries to create as players stop being creeped out and start feeling either bored or irritated with slogging through the same fixed scares.

Despite all negatives, when you dig deep, you can see the promise this game had. For a downloadable title, the art direction is actually surprisingly good, even if it’s let down by technical problems like stuttering frame rates. Lana herself is a strong, female character that is neither a sex object, nor helpless and requiring the assistance of a man. The story hints at a certain amount of thought and depth, despite being badly executed in cut-scenes. Somewhere in this game, good ideas got lost. What we’re left with is a technical mess, and text-book example of what not to do in game design if you want players to enjoy themselves. Amy is hard. It is also frustrating, unfair, not fun, and perhaps worst of all for a survival horror game, not scary. The best horror game of this console generation, Siren: Blood Curse, can remain comfortably on its throne.

Amy is one of those games full of regrets. As a critic or reviewer, there is regret at seeing something with genuine good intention and potential go completely off the rails.
REVIEW SCORE
5
File Under: Action, Adventure, Arcade, Horror, PlayStation