Get Your Gear On 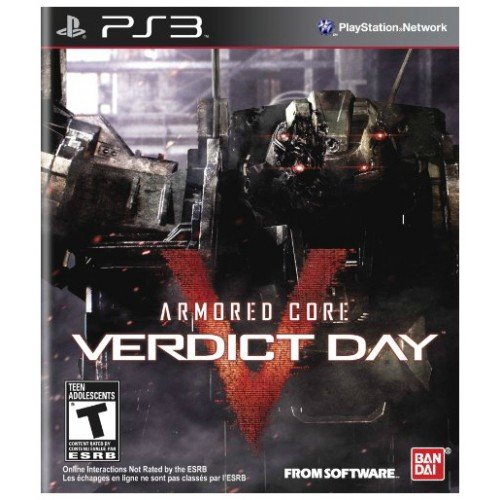 Armored Core: Verdict Day is basically a multiplayer expansion for the original Armored Core V that came out last year. That game also had multiplayer, but was a more traditional AC game, with an emphasis on the single player campaign, and a promising multiplayer component that fell victim to not having enough players to sustain matches. Verdict Day comes to AC fans one year later offering the reverse; a simplistic single player campaign has been tacked on to a very elaborate multiplayer mode. In that regard, Verdict Day works. Unfortunately, it’s strictly in that regard that the game has any value.

From Software—better known to some as the creators of Demon’s/Dark Souls, has a reputation for making complex, difficult games. Verdict Day is no exception to this, being a new addition to the long running Armored Core series. It uses the same engine and assets of its predecessor, which is serviceable, but not impressive in the wake of games like Beyond: Two Souls. This is an expansion, by PC gaming standards, and because of that, it’s hard to recommend the game to anyone except AC fans that already have Armored Core V.

This is not an entry point into the AC world for first-timers, and that’s made evident in the opening minutes. Aside from a lengthy install, players must create a new, separate multiplayer account with a “merc team” banner to fly under for all future activity. It takes a very long time and a lot of menu navigation and form filling before players actually get to sit down and play. Once they do, only the experienced will not be lost at sea. The tutorial and in-game manual do a poor job of explaining mechanics. Most tellingly, the game allows players to import their save data from AC5, and even the anemic single player campaign seems balanced to assume you’re piloting a fully upgraded mech that you carried over from your previous game. Starting with a brand new mech puts players at a serious disadvantage, and while the missions aren’t impossible, the odds are stacked even more against a beginner. And of course, there is the intricate configuration of the mechs themselves. Again, the game does a poor job of explaining the nuances of mech customization to beginners, assuming experienced knowledge from players coming to the game. The system itself is just as elaborate as ever, allowing new parts to be bought or even salvaged from the battlefield, and added to a mech. It’s a robust, impressive system, but there’s no hand holding here, and new players will pretty much have to rely on the internet to get up to speed on this.

On the other hand, the multiplayer handles many complaints leveled at AC5, particularly the inability to maximize teams. You can continue to fly under your own merc flag, and recruit others to your team, or join with them as well if you prefer to belong to someone else’s team. Players can then pick from one of three factions to which their merc team will belong, and then fight for supremacy over the course of a “season.” When a victor emerges over the course of many battles, the season concludes and a new one begins. Perhaps most importantly, there are now AI companions. Battles can be filled with a mix of human and AI companions/opponents, and the AI can even be programmed with an intricate rule set, similar to the “Gambit” system from Final Fantasy XII. Taking the time to explore this new UNACS system can yield a permanent AI partner that might even prove to be more dangerous and useful than the average human partner if correctly programmed.

All of these features make multiplayer a hectic, fun experience that doesn’t necessarily have to be sparsely populated. This is an elaborate overhaul of the original AC5 system, but people are basically paying for an improved multiplayer mode. The single player campaign is mostly search and destroy missions with some boss fights thrown in and never really surprises or innovates. So, if you were an AC5 fan that wished the multiplayer had been better in that game, then Verdict Day is for you. For everyone else, there’s not much reason to get this.