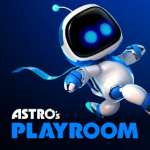 Astro Bot Rescue Mission was one of my favourite PSVR exclusives on the PlayStation 4, taking the best elements of a Nintendo platformer while including VR elements that felt imperative to the experience. Flashforward to the launch of the PlayStation 5, Astro is back as a free, pack-in, preinstalled title for Sony’s latest home console in the title, Astro’s Playroom.

Like its predecessor, Astro’s Playroom is an action platformer in the same vein as classic 3D platformers such as Mario and Crash Bandicoot, minus the VR element found in Rescue Mission. At its most basic level, Astro’s Playroom can be considered a charming tutorial and showcase to get new PlayStation 5 owner’s accustomed to the Dualsense controller.

However, in truth, Astro’s Playroom is so much more than a demo, in fact, the game includes a Platinum trophy, and can last anywhere from 2-3 hours to 4+ for those wanting to experience everything it has to offer. Sony and Team ASOBI have done an excellent job in slowly but surely, positioning Astro Bot as not only a new Sony property but a PlayStation mascot character.

From CPU Plaza, the player has free reign in where they want to go, with each of the five worlds split into different components of the PlayStation 5, in addition to an area called PlayStation Labo. The Labo area acts as a gallery of sorts, allowing the player to view collectables and other goodies, after finding them from one of the five available levels, in addition to unlocking them gatcha-style with in-game coins.

The levels themselves in Astro’s Playroom begins fairly easily and ramps up in difficulty over time, while striking a balance between fun and challenging, making it accessible to most players, even those who may not regularly play platformers. the game eloquently teaches the player how to use the Dualsense controller, taking the time to properly show off some of its features, including the nuanced haptic feedback and adaptive triggers.

Aside from being a showcase of the tech that the PlayStation 5 is capable of, Astro’s Playroom excels in its exuding charm, with callbacks and references to many PlayStation properties sprinkled throughout the entirety of the game. Ultimately, Astro’s Playroom is a celebration of PlayStation’s legacy encapsulated in a toy-like aesthetic that delivers a fun experience that doesn’t overstay its welcome and gives all players something to dive into when they get their hands on a PlayStation 5.