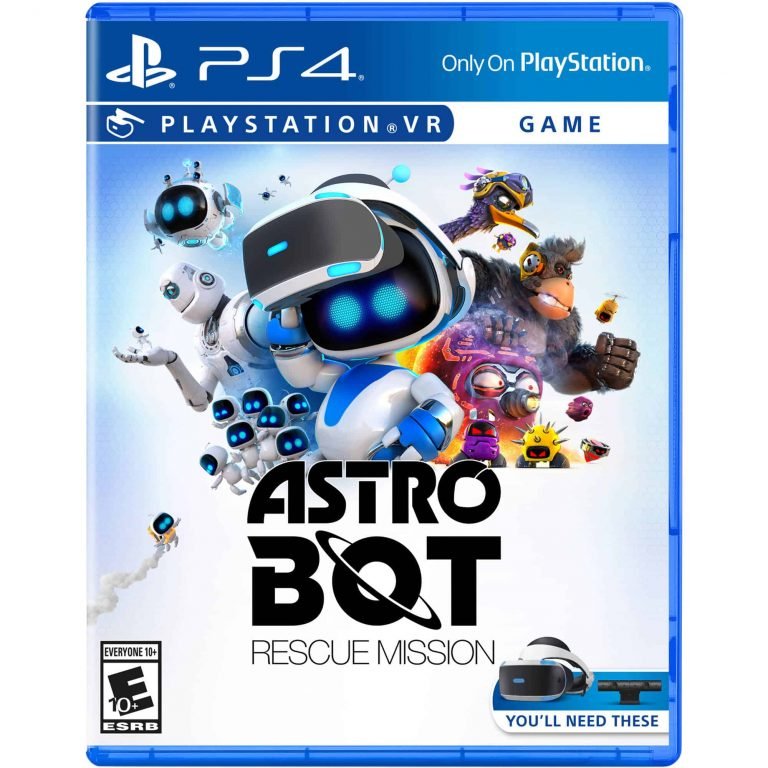 Astro Bot: Rescue Mission is the latest PSVR exclusive game to come out of Sony’s Japan Studio, the same developers that brought The Playroom, which launched alongside the PlayStation 4 back in 2013, and took advantage of the PlayStation 4 camera and later, the PSVR with a free update.

Astro Bot: Rescue Mission reintroduces players to the adorable AR Bots from the Playroom, only this time, instead of showcasing a collection of mini-games, Astro Bot instead, offers players with a full-fledged action- platformer, while taking full advantage of the PlayStation VR hardware.

Platforming and VR may seem like a recipe for a bad time, however, Astro Bot is a third-person platformer that utilizes the PSVR headset as the camera, which may seem like a strange mix but Sony Japan Studio has done a stellar job in marrying the two seemingly clashing genres.

Although definitely still a niche, third-person VR platformers aren’t new, with games like Lucky’s Tale and Mervils: A VR Adventure, the concept has been explored before, yet what sets Astro Bot apart, is the level of polish and synergy between the more traditional feeling third-person platforming gameplay along with the smart use of the VR camera.

Astro Bot: Rescue Mission opens with a small cinematic that sets up the premise of the game: the adorable robots from the Playroom are in Space when their spacecraft gets destroyed by an evil alien, which inevitably hurls all your crewmembers into the far reaches of the beyond, including pieces of the ship.  Thankfully, one of the Bots manages to hold on, taking it upon itself to rescue the 100+ other Bots that have become stranded, while also being on the lookout for pieces of the ship.

After donning a distinctive blue-cape, players assume the role of the lone Bot, who looks a bit like what would happen if you crossed a Funko Pop vinyl figure with the character EVE, from Pixar’s Wall-E.  Players also assume the role of a secondary character, the VR camera itself, which is represented by another robot on a floating circular platform and can only be seen in reflective surfaces.

Controlling the caped robot feels tight and responsive, as any good third-person platformer should. inputs themselves only use two of the four face buttons, with the cross button bound to a single jump, which when held, allows the player to hover for a few seconds (damaging enemies directly underneath your path), while attacking is mapped to the square button, which when held down, allows for a charged twister spin, akin to Crash Bandicoot’s spin attack.

One of the ways in which Astro Bot sets itself apart from other platformers is in how the camera or the player’s head is utilized during gameplay. Obstacles such as post-signs, blocked off doors, magical beans, and enemies others can all be broken by physically headbutting whatever is in the way. In fact, often times, certain enemies can only be defeated by the player’s head, rather than the caped Astro Bot, which ultimately helps creates a strong sense of unity between both the camera and the player character or Bot.

Several of the worlds or series of levels introduces treasures that augment and spice up the otherwise standard platforming gameplay. Abilities include a grappling hook, water hose, and ninja stars, amongst others, which all can be deployed via an in-game representation of the Dualshock 4, which is present at all times and is tracked via the real-world position of the controller. These abilities can be used to create platforms, destroy hazards or otherwise interact with the environment, allowing the caped Astro Bot to proceed further into the level.

Each level, excluding boss encounters, consist of finding 8 missable Bots that need to be rescued, in addition to an optional chameleon that unlocks a bonus stage, after clearing the initial level (additional bonus stages can be unlocked by defeating bosses).  Finding all 8 of the Bots in a given level truly highlights how well Astro Bot: Rescue Mission blends VR tracking with traditional platforming — perspective and depth is used to great effect in most levels, encouraging the player to really move their head, look around and just take the time to scan their environment, before finally using the analogue stick to move the primary Bot further.

The game often rewards players that take the time to look around, as many of the 8 Bots, especially later on in the game are very well hidden. Thankfully, auditory cues are used to hint at when a Bot is in close proximity to the player, making things a bit more manageable for the hoarder in us all.  It should be noted that players wanting to just finish the game, can do so without worrying about missing a few Bots, as not all of them are required in order to unlock boss doors at the end of any given world (similarly to games like Mario 64). The sound effects of the player Bot, feel charming and quirky, as does the music, which offers fun and upbeat tracks that help immerse the player in the storybook-like look of the game.

Aside from Bots and chameleons, players can also find an abundance of gold coins displaced around every level, including larger coins that are sometimes a little out of the way or hidden away from the main path. Coins can be spent in the hub area of the game and are used to purchase Gachapon or in-game capsule toys that contain miniature dioramas in a series. Accruing enough toys within a specific set unlocks a miniature playground, based around different worlds present in the game, furthermore, players can actually move around these sets when complete, which transform the hub world, accordingly when deployed.

One of my favourite aspects of Astro Bot: Rescue Mission came in the form of boss encounters, with each offering a unique way in how to tackle them, while also offering just the right level of difficulty —  unlike main levels, boss encounters gifts the player with two additional lives or continues, which I found myself often needing, as each phase within a given fight escalated in difficulty as the battle wore on. Bosses in the game also require the use of treasure items, like the grappling hook, which for the first boss in the game is used to pull teeth, causing the boss to momentarily become stunned while simultaneously eliminating its means of attack.

Sadly, unlike the rather striking designs of most of the boss encounters, I found the majority of the standard enemies looking rather uninspired, especially in some of the underground levels featured within the game. Most enemy characters look or behave like classic Mario critters, such as Goombas, Whomps, and Wigglers, albeit with a robotic coat of paint, reminiscent of Megaman.

Another small complaint I have against the title is in how checkpoints behave. Unlike most games, where players must touch or pass through the checkpoint in order for them to trigger, in Astro Bot, just being in close proximity will cause the game to activate it. This at first, seems like a good thing, however, often times, due to how the camera moves forward as the player progresses, I found myself missing a collectable because of it being too far back for me to turn around and grab, and thanks to the checkpoint triggering, impossible to reset, without restarting the entire level.

These are very minor gripes in an otherwise fantastic VR platformer, a title in which not only feels good to play but also utilizes VR to its fullest, without feeling like a gimmick or extraneous feature.

Priced at a lower entry point than most retail releases, Astro Bot: Rescue Mission is a must play for owners of the PlayStation VR headset, even for those who may not necessarily have a fondness for platformers or are turned off by the cute, cartoon-like aesthetics of the game.
REVIEW SCORE
8.5
File Under: PlayStation