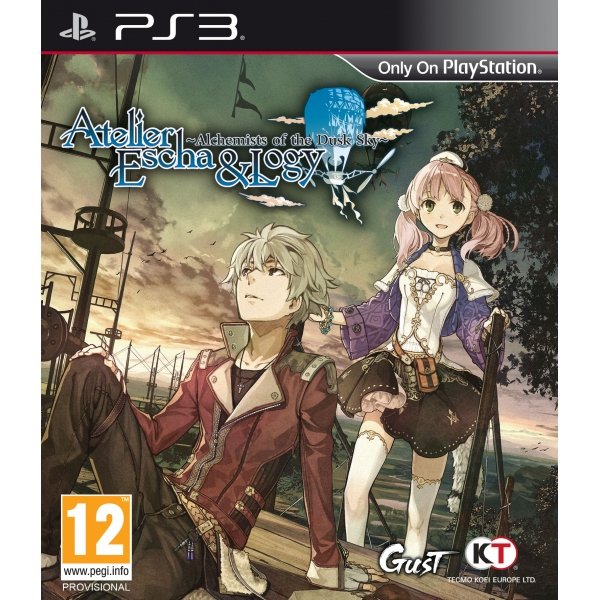 More Alchemy On A Budget

Gust is a smaller, niche Japanese role-playing game studio, similar in obsession and scale to Atlus, except, unlike Atlus, they didn’t suddenly blow up and get recognized widely in the West for their quirky series. Where Atlus captured a larger audience with the demon summoning/school attending antics of the Persona series, Gust, with its fixation on alchemy, continues to crank out one Atelier game after another for its small pool of fans. This latest title is just another notch on that belt.

The Atelier series is unique in the JRPG genre for its absence of big villains or crises. The plot of this particular game is especially Japanese. You choose either Escha—a local country girl—or Logy—the new city boy—as the main character in the beginning. Both of them are alchemists, but now they’ve been assigned to work together at the R&D division for Escha’s town. And that’s the set up. No amnesiac heroes, no ancient evils once again on the rise, no catastrophe that means the coming of the apocalypse. Just two new civil servants, working hard to gain acclaim for their department and increase their internal budget. Of course, there are hints about mysterious, ancient ruins, but nothing in this game screams cosmic scale disaster.

In the technical department, this has traditionally been a series on a budget, and that doesn’t change here. Blocky, simple environments are nearly at PS2 levels of detail, and the frame rate drops regularly. The character designs are where all the effort went, with a lush anime style and color textures that simulate hand-drawn brush strokes. Unfortunately, the effect of the high quality characters with low quality backgrounds is similar to kids taking their action figures and using them in hand-made play sets of construction paper; it clashes, and that’s been the way of things since the move of the series to high definition graphics. Even the monsters are the same, with some palette swapping done so they don’t completely resemble past versions of themselves from other games. Fortunately, the audio fares a little better. Gust has RE-included Japanese audio, a feature missing from the last game, which was unfortunate since the English voice acting was sub-par. The music itself is the same mix of bouncy J-pop-esque tunes that have always graced the series, which is probably a good thing since most fans of this game are probably Japan-o-philes to some degree anyway.

Of the gameplay itself, there’s little to discuss, at least for veterans of the series. Unlike Final Fantasy, which aggressively re-invents itself with each new game, Atelier only tweaks things up here and there, while faithfully adhering to an established formula. Players spend equal amounts of time at a cauldron throwing ingredients in to synthesize new items, or run around various environments, collecting herbs and participating in turn-based combat against a variety of wildlife. A clock is ticking—in this case the quarterly company report that determines whether your department continues to get funding—so time management is another key element of the game. All of these mechanics have been honed over many games to the point where the balance feels just right if overly familiar. And this, of course, is the game’s biggest weakness. Aside from a few minor adjustments to combat and alchemy, this is the same game that fans of the series have been playing for years. It doesn’t lend itself well to inducting newcomers, since the depth of these systems is substantial, demanding a lot of patience, research, experimentation and familiarity. There’s a fun game in here, but the fun is for a very narrow, specific audience, which is why this series has remained firmly niche all these years. If you want to play a game that’s more about job satisfaction, co-worker relations, resource gathering and ingredient mixing, then you’ve been missing out all these years and the latest Atelier is for you. If you’re not into any of that, this game is an exercise in tedium. And if you’re a fan, you’ll buy this anyway because it’s the same game you’ve been playing for years, with the requisite new story and characters that bear striking behavioural similarities to past characters in the series. Atelier in other words is all about slightly changing things up for established fans that just want more of the same.

The Atelier series is unique in the JRPG genre for its absence of big villains or crises. The plot of this particular game is especially Japanese.
REVIEW SCORE
6
File Under: PlayStation, RPG