Bloodstained: Curse of the Moon Review 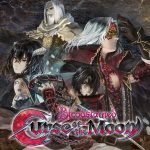 Rarely does a Kickstarter stretch goal lead to the development of a new game, but that’s exactly the case with Bloodstained: Curse of the Moon.

Developed as a bonus for backers of Koji Igarishi’s forthcoming Bloodstained: Ritual of the Night, Curse of the Night looks and feels like a long-lost Castlevania game from the 8-bit era. It often strays a bit too close to the trappings of that era for its own good, but Curse of the Mood is still an entertaining romp through a gothic world.

Taking its biggest inspiration from Castlevania III: Dracula’s Curse, Curse of the Moon follows a demon slayer named Zangetsu on his journey to defeat a powerful demon. He’ll jump and hack his way through levels with his sword, and can be eventually joined by up to three other characters on his quest. Like Dracula’s Curse, you can freely swap between each of your heroes, who have their own unique abilities and power-ups to use. While I enjoyed my time with all of them, I personally preferred to play as Miriam, whose high jump and whip made for an effective combination. Switching between these characters is necessary to progress, and it’s a simple mechanic that I enjoyed making the most of.

The story itself is rather straightforward and simple, taking a backseat to the beautiful backgrounds and gorgeous animations of skeletons, bats, and other monsters on your journey. While there are multiple paths to explore in each of the levels, they don’t offer much beyond minor differences in platforming, as the core gameplay never changes. Exploration is further hindered by Curse of the Moon’s stubborn insistence on the inability to change your momentum in mid-air, which is the most common cause of frustration and deaths.

The strict attachment to the gameplay elements of the NES era is Curse of the Moon’s biggest downfall. Attacking feels slow no matter the character, and the overall movement is sluggish to the point of boredom. If you play on Veteran difficulty, the knockback effect will result in numerous cheap deaths as you fall into pits over and over again, particularly when a certain flying enemy type is involved, though you can always restart and change the difficulty.

Curse of the Moon can be beaten in under two hours, though there are multiple endings and new difficulties to play through if you so choose. I enjoyed my time playing through with the four heroes, but I also think I’ve experienced all I need to see. Curse of the Moon plays off of your nostalgia to great effect, and even though it doesn’t modernize many of the elements it takes from the Castlevania franchise, it’s a potent reminder of the great design that can be found in that generation of video games.

Curse of the Moon is a nostalgic trip back to the era of classic Castlevania games, warts and all.
REVIEW SCORE
7.5
File Under: