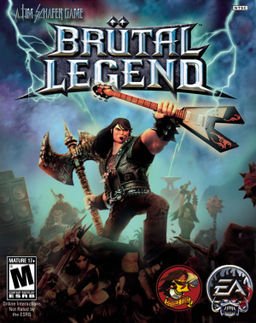 In Brütal Legend, the world of video-games and music collide. Recently released for the PlayStation Entertainment System and the XBOX 360, Brütal Legend is the latest game from Tim Schafer, creator of such famous titles as The Secret of Monkey Island, Full Throttle and Grim Fandango. The question is does the world of rock and video-games mix well enough to create anything more than a well intentioned mess? The answer is yes, they combine into a very interesting game – just don’t expect a masterpiece.

The story of Brütal Legend follows roadie extraordinaire Eddie Riggs (voiced by Jack Black) after he suffers a freak stage accident and finds himself in a fantasy world, filled not with dwarves and elves, but rather metal inspired denizens and a cast of characters straight out of your dog-eared vinyl collection. The quest set before Eddie is to save the land from an evil hoard of demons enslaving humanity, while at the same time discovering something about himself. Tim Schafer is not one to skimp on story. If Schafer’s pedigree proves anything it’s that playing a video-game means more than just slicing-and-dicing, it involves the player’s total immersion and belief to commit to a world of pixels and polygon

Brütal Legend is no exception, Schafer makes players want to navigate the world and play until the end credit The acting talents and visual style create an interactive world which borders into cinema at times, and the producers went to great lengths to incorporate cameos from brand name rocker Lemmy Kilmister, Rob Halford and Ozzy Osbourne all lend vocal talents as well as likenesses, enforcing an authenticity few Games can challenge. It’s too bad the story wasn’t longer. Clocking in at around six hours play time for single player seems insubstantial. The ending also comes along too soon taking away some of the glory earned purging the land of demon

The gameplay consists of three main elements, third person action game, open world roaming and a strategy section. This combination adds up to a minor weakness, because the sections don’t feel compatible. That is not to say they are disjointed, but when one looks at Legend as an interactive story one begins to feel that some parts are just standing in the way of you finding out more about Eddie Riggs and his crew. The third person action works well, you feel like you have complete control over Eddie, and feel powerful doing so. But the strategy section gets bogged down in complexity. Likewise the multiplayer component isn’t as compelling as it could have been, rendering it unable sustain significant replay value.

A crucial aspect of the game is the open world players experience with the vehicle, The Deuce. For most of the game this acts as a way to get from one quest to another, but it’s just as much fun to blast tunes and drive around sightseeing. Missions abound where players can dismount The Deuce and follow, along with places you can upgrade your weapons and car, but this portion seems like a missed opportunity again. It would have been beneficial to connect the side missions with the primary plot to create a game of more consequence rather than include an arbitrary “arcade” mode to the major “story” mode.

The stellar soundtrack accompanying Legend is, of course, phenomenal, consisting of tracks from rock legends such as Motörhead, Black Sabbath, KMFDM, Whitesnake, Megadeth, Ministry, Slayer, and Mötley Crüe – with more satirical music thrown in from the likes of Tenacious D and Dethklok. Never have metal and rock tunes been used to aide such a high concept game. Not a moment goes by when anthemic riff-ridden rock isn’t blasting. At key events in the game emphasis on story and character development is highlighted by the music. Using music to propel the story makes for both an intriguing game and, dare I say it, a legendary soundtrack – however, it doesn’t quite redeem the fumbles in gameplay.

So, with the strong story component but the weaker gameplay element, Brütal Legend begs the question: is it worth it? Well that question is not as simple as you may think. If you are a fan of Tim Schafer, then this is a ripe addition to your collection – you don’t need me to tell you that. For people unfamiliar with Schafer or for those who are interested in the music and gaming integration, you should still play this game, just don’t shovel out the dough to own it. The characters, and the world they reside in, need to be experienced, but once may be enough. Rent it, or make friends with those who own it, because the story-line and character arcs make it well worth the effort.