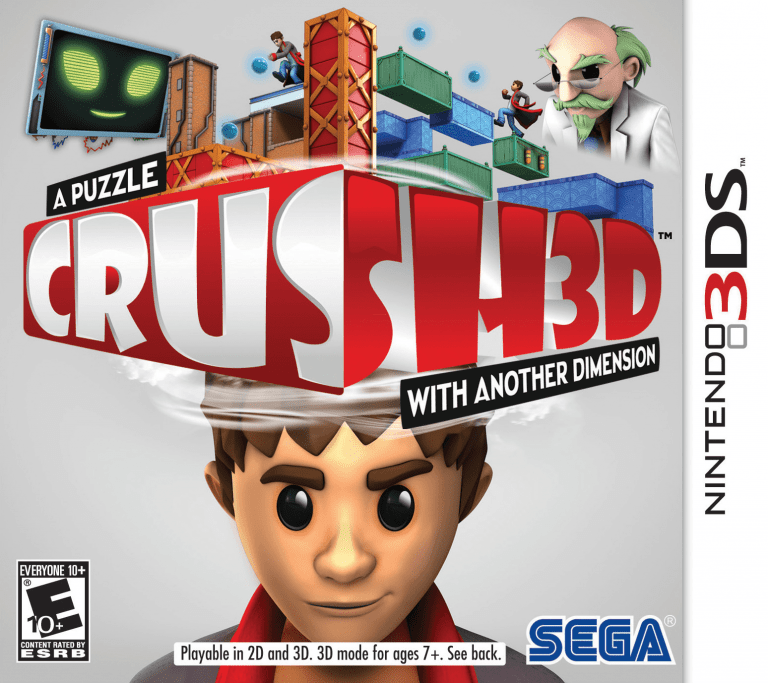 The 3DS has been swimming in top tear titles lately from Resident Evil to Metal Gear Solid and even Kid Icarus’ unexpected return. They were all pretty solid games, but if there was one problem that they all share it’s that they didn’t really take advantage of the unique 3D display. Sure, having monsters pop out of the screen is fun and some of the epic Kid Icarus levels offered impressive depth, but none of the games felt like they had to be in 3D. It was a welcome bonus, just not a requirement. Well, fortunately Sega has gone and made a game in which 3D is a vital part of the experience. Their new platforming puzzler Crush 3D demands that extra visual depth for proper play and while it may not boast the blockbuster visuals or a foster the crack-like sense of addiction those recent titles offered, it’s still a pretty damn good little game worthy of attention from 3DS owners.

Crush 3D is about a teenage boy named Danny who for some reason is best friends with a vaguely creepy old mad scientist (it’s best not to think about their relationship to much, just pretend it’s completely platonic like Back To The Future). The Doc has invented a strange new super computer called C.R.U.S.H. and decides to try out the untested software on his teenage buddy…again, ignore the creepiness. The software allows the user to access their unconsciousness to understand themselves a bit better, but at the moment C.R.U.S.H. is a bit buggy. So, Danny is thrust into his subconscious only to find a series of surreal puzzles that need to be solved to get C.R.U.S.H up and running. That’s where you come in.

You’ll play as Danny in one of forty strange floating puzzles. You’ll walk around literally trying to collect your marbles (the game designers did have a sense of humor about their concept) and the puzzles are solved using the crush mechanic. The levels themselves are 3D floating spaces with large gaps and obstacles, but at any time they can be “crushed” into 2D using the L button. If you position the camera from the top, everything will be flattened out an long drops that would have meant death can be walked across, then when you un-crush by tapping L again the distance will be reinstated. Do it horizontally and large gaps will be crushed together. Having the game in 3D actually helps a great deal when trying to solve the puzzles as the added depth will help you sort out which slots will line up when crushed. It’s actually trickier to judge with the 3D turned off, so the developers deserve some serious praise for working specifically in three dimensions.

Moving around the platforms requires simple walk n’ jump platforming, Danny’s a lazy guy though, moving sluggishly and jumping only small distances, so you’ll have to rely on the crush mechanic whenever possible. Numerous obstacles are thrown in like giant balls and soda cans that need to be pushed around and Danny’s unconscious will also dream up some ugly bad guys like giant cockroaches that need to be dealt with. Like all puzzle games, it’s deceptively simple. The initial concept is easy enough to grasp, but the seemingly endless variations on the formula constantly ratchet up the difficulty. Crush 3D can often be punishingly difficult. Every time you master one mechanic a new one will be thrown your way and in later levels it can be difficult to remember all of the different techniques that need to be mastered to continue. A “tip” button was added and is very useful, but it drops your score with every use, which can be a pain. There are also trophies n’ power-ups scattered throughout to reward replay and add extra challenges, if somehow you don’t feel the current puzzle is tough enough.

The graphics are smooth and functional, but very simple compared to the recent 3DS releases. For the type of game Crush 3D is, that’s all you’ll need but prepare for a visual downgrade if you just finished up Resident Evil or Kid Icarus. This is probably the best puzzler to be released on a cartridge for the 3DS, so if you love those types of games it’s a must buy. However, if you aren’t an obsessive puzzler, you might feel that it’s not worth the investment. Sure, the 40 puzzles will work out your brain for hours, but I wouldn’t say it’s a much more satisfying experience than the eShop’s Pushmo, available for a fraction of the cost. Sure, Crush 3D has pretty cut scenes and Street Pass support, but neither adds much to the experience. Puzzles are all that matter and while Crush 3D delivers some great ones, I’m not certain this needed to be a cartridge game. Still, if you’re a fan of the genre there’s hours of fun to be had here and the concept and execution are ideal for the 3DS. The only downside is that after a production delay, the game is coming to the system amidst a sea of blockbuster new releases and I worry it will get lost in the shuffle. If you love puzzle games, seek Crush 3D out. It’s definitely worth it for fans of the genre. It’s worth considering for anyone else as well, just know the experience you’re throwing down your cash for is not quite a grand as what we’ve come to expect from 3DS games over the last couple of months.

Despite the unsatisfying story I did enjoy I Am Alive on an atmospheric and mechanical level. The dust that covers Haventon serves a dual purpose.
REVIEW SCORE
8
File Under: