The king of bullet hell shooters, CAVE, have ported Deathsmiles, a game which very well may be my favorite in the genre, to the PC.

Playing as one of five angels from around the world, you’ll spend most of your time dodging the hundreds of bullets that fill the screen while firing in every direction. There are various modes available ranging from the original arcade version of the game with no graphical updates, the Xbox 360 mode (called normal mode here) that has better graphics, along with 1.1 and Mega Black Label variations. 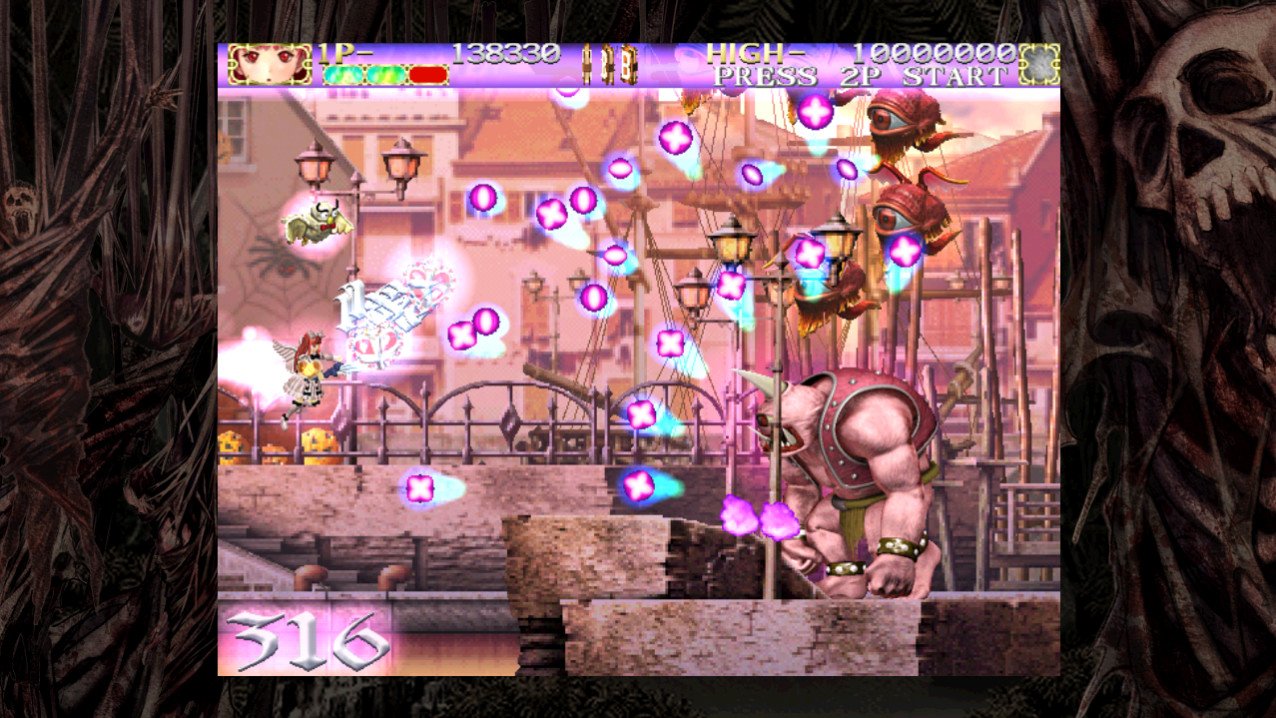 Version 1.1 allows players to manually control their familiar creatures that fly along with them shooting and absorbing certain types of bullets; familiars automatically rotate around players based on movement in vanilla Deathsmiles. Mega Black Label modes have an additional playable character, an extra stage, and an extra difficulty mode for hardcore bullet hell veterans.

That said Mega Black Label 1.1 is the mode that is feature complete, having everything the others offer in one place; the only reason to play the other modes would be if you care about getting on their separate high score leaderboards for bragging rights, or if you want to see the original arcade graphics.

Graphically Deathsmiles isn’t so easy on the eyes, considering the source material is from 2007, but that doesn’t mean it is by any means unplayable. Levels and characters mostly consist of gothic lolita imagery, but there are a couple of levels that take place in a forest and a volcano to mix it up a bit. Depending on the difficulty setting, there won’t be much time to admire the graphics as there will be hundreds of bullets and items filling the screen.

Once 1000 items are collected, they can be activated to power up your bullets as well as boost your score. You’ll also find your standard bullet hell bomb that clears the screen of all enemies and bullets.

Instead of starting from scratch the PC port is essentially just the PAL Xbox 360 version ported to PC, minus online multiplayer (the word Xbox appears on some of the game’s files). Local multiplayer is intact with the option to have both players play on the same keyboard or separate controllers. The PAL localization used a lot less flamboyant dialogue than the NTSC version and was preferred by some players. Personally, I liked the zany, over-the-top dialects found in the North American release. But you’re not playing this for its paper-thin story, you’re playing to shoot and dodge a bunch of bullets as teenage girls.

If you’ve never played a bullet hell shooter, or fear they may be a bit too difficult for you, Deathsmiles is a great place to start. It offers multiple difficulties ranging from really easy to over-the-top difficult and is colourful and fun regardless of your skillset. If you’ve got a thing for gothic lolitas or giant bosses you’ll get your fill here. Deathsmiles is easily one of the best shooters of all time, and recommended for those looking to experience the game on their PC.

Graphically Deathsmiles isn't so easy on the eyes, considering the source material is from 2007, but that doesn't mean it is by any means unplayable.
REVIEW SCORE
8.5
File Under: Android, iOS, PC, Xbox