The Nexus of Dungeon Crawlers 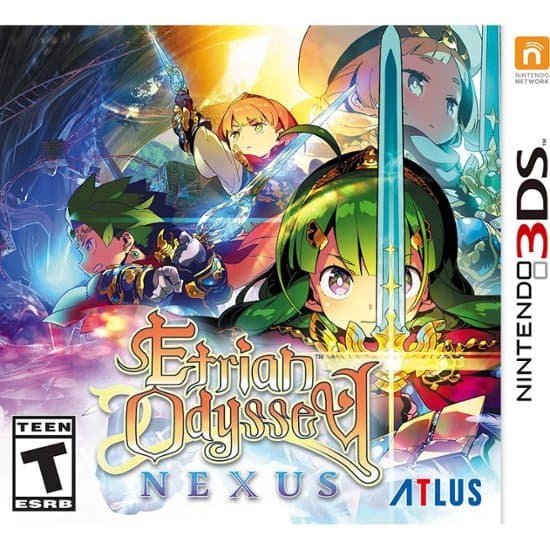 Etrian Odyssey Nexus is the culmination of a franchise that has sought to return RPGs to the epic, dungeon-crawling heydays of the 80s, where exploration and combat were paramount and plot merely served as flavour to the proceedings.

Across five games in the main series and two remakes, Etrian Odyssey has endured on the DS and 3DS line of systems as the most hardcore of hardcore RPGs, where you must chart your own path through increasingly difficult labyrinths and battles. But Nexus isn’t only the newest title in the franchise, it’s also the last game in the series set for release on the 3DS. And with nothing left to hold them back, Atlus has created one of the best entries in the franchise to date, and one of the best dungeon crawlers I’ve played in years.

More than just the final Etrian Odyssey title on the 3DS, Nexus can also be described as a best-of collection for the series as a whole, with one exception: each of the 19 classes are pulled from past entries in the series, ranging from the first Etrian Odyssey’s Protector all the way to Etrian Odyssey III’s Farmer. Many of the labyrinths are identical in both name and design to those featured in previous games, though each is tweaked just slightly to keep longtime fans of the franchise on their toes. Atlus has gone all out in making Nexus a celebration of Etrian Odyssey as it says goodbye to the console family on which it originated.

Set on a flying island, Nexus features adventurers from all over the Etrian Odyssey world banding together to explore another massive series of dungeons and labyrinths in search of treasure from an ancient civilization. That’s pretty much the plot of every Etrian Odyssey game, and as per usual the story and the characters you encounter are little more than window dressing. There’s no dramatic dialogue choices, romance, or even interesting NPCs to speak of, as the series is firmly focused on delivering on two fronts: combat and exploration. Your characters, if you can call them that, can be customized with a handful of portraits per class and through colourful hairstyles, irises, and skin tones. While past games released outside of Japan featured English voice acting, Nexus features strictly Japanese voices, which is a welcome change if you found the voices in past entries as grating as I did.

While the opening hour doles out core concepts at a manageable pace, and a bevy of features from past games make it a reasonable place to start for newcomers, Nexus is a game that is complex to begin with and explains less as time goes on. You form a party of up to five characters with which to explore dungeons, and woe be to those who expect any form of help when creating one. When choosing classes for your party, there is little to go off of past a short description that implies the role the class fulfills. You’ll never be able to see the true potential of a class until you start exploring the skill tree, and even then the full ramifications aren’t fully discovered until late in the game.

Crafting a strong party and seeing what they can do on the battlefield is a sight to behold. Using a Gunner, I could bind enemies body parts to allow my Pugilist to pull off a multi-hit combo for truly intense damage. My Hero specialized in creating clones of herself, which I subsequently buffed to high heaven with my other party members to increase their effectiveness in the short time they were alive. Exploring some of the more obtuse classes, such as the Harbinger or the Imperial, can lead to some inspired combinations that make up for their lack of utility. In effect, Nexus is a min-maxer’s dream come to life, featuring a system that encourages digging into its mechanics to bring out the best in your party.

Making use of those tools and combinations is almost required to survive and thrive as well, as the actual battles themselves are brutal, even if it’s just a basic enemy. Monsters always have more health than you, and their vast array of abilities—particularly when used in conjunction with one another—force you to utilize the full potential of your builds if you want to survive. One enemy in an early dungeon unleashes a stun attack upon death, while another that can appear on the same floor has an attack that deals more damage to stunned characters. Yet the true highlights of the combat in Nexus are the boss battles, which are uniformly epic in length and scope. These become battles of attrition that reward proper tactics and sufficient preparation, with some fights taking upwards of twenty minutes to complete. For those who enjoy seeing long term plans pay off, this is a game that is made for you.

Nexus features the same love and emphasis for its combat in its exploration, and the focus on cartography makes its old-school roots abundantly clear. On the 3DS’s bottom screen, you chart maps of the dungeons and mazes that you explore with a ton of tools at your disposal to mark hazards, treasures, and geographical features. While there is a rudimentary auto-mapping system in place, the true joy of Etrian Odyssey comes from creating your own code and system for filling in the edges of the map. There is no tutorial nor any hints provided for what the markings and colours mean, but in due time you’ll craft your own meaning. You may not mark down the location of every event or diligently ensure that walls are drawn everywhere as I did, but the challenge in crafting your own map is an activity that is as enjoyable for some as it is tedious for others.

Visually, that means exploring dense forests and ancient ruins filled with cherry blossoms in equal measure. Exploring these labyrinths is alternatively quiet and harrowing, depending on whether any enemies are near you or not, but it’s all portrayed as a series of untouched ruins that you are the first to see. By and large, this is fine, though none of the areas stick with you outside of gameplay mechanics because they look so generic. The problem is, the game takes its sweet time in showing you the different biomes and areas you explore. It took over 20 hours of gameplay before I entered a dungeon that was not set in a green forest or jungle, and those opening hours became tiresome quickly because everything looked the same.

The saving grace lies in the layout of each labyrinth. Even though the visual palette was similar, the designs and puzzles of each meant that surface level appearance could be overlooked. One floor might task you with moving between FOEs—the powerful, giant enemies that roam the map—creating a navigational puzzle. The next floor will have the same puzzle, only this time hazards such as poison and mud are added to the mix, while the third will add in climbing and height and so on and so forth.

Etrian Odyssey Nexus is the densest entry in the series to date. The sheer number of things to do, quests to complete, and party compositions to experiment with means that people like me will have a blast crafting a squad and watching as it climbs increasingly higher walls with each new labyrinth explored. From the vast number of customization options for classes, the variety of challenges to overcome on each floor, and the ever-present cartography mechanic, this is a game that is perfectly suited and developed with longtime fans in mind. Even if you’re not, the sheer number of things present here makes it a worthwhile entry point for newcomers. Nexus is the best Etrian Odyssey has ever been, and it’s a fitting swan song for its time on the 3DS.

With the series ending its run on the 3DS, Etrian Odyssey Nexus proves itself to be the strongest entry in the franchise yet.
REVIEW SCORE
8.5
File Under: