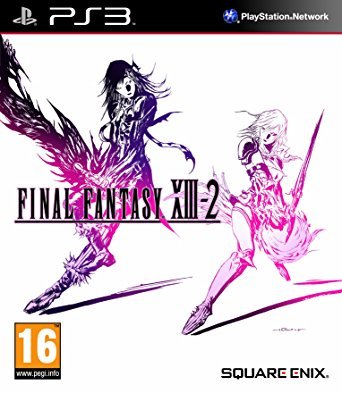 As with Final Fantasy X, Square has seen fit to do a direct sequel to Final Fantasy XIII, a game which was commercially successful, but less so critically. The original game, while hailed for its high quality graphics, received a lot of criticism for its gameplay, story and most of all, its linear nature. The new game meets all the criticisms heads on, and with the exception of one glaring aspect, largely succeeds in being a better game than its predecessor.

Final Fantasy XIII-2 side-steps the characters and story of the original in favor of taking up a new tale. Serah, the hapless sister of protagonist Lightning from the original, is now the main character. It is three years after the events of FFXIII, and Serah has settled down to her new life as a teacher in the seaside town of New Bodhum. Everything is idyllic, except for the fact that she’s the only one that recalls her sister not being dead at the end of FFXIII. Everyone else remembers Lightning as having sacrificed herself during the climax, but Serah remembers her being very much alive, at happy reunion, before suddenly going missing as Serah’s attention turned somewhere else. Even Serah herself is now starting to wonder if she didn’t imagine it all when an adult, Sora-look-alike named Noel arrives from 700 years in the future to tell her that he was sent by Lightning on a mission to reunite the two sisters via time travel and the resolution of chronal paradoxes. That baffling intro out of the way, the story steps up a gear to tell a tale heavily inspired by adolescent musings of Back to the Future and its time travel complications, along with the standard dose of broody, JRPG angst concerning characters not strong enough to protect the ones they love as they discover the Power Of Friendship ™.

It’s here, in the story department, that FFXIII-2 experiences its most significant blunder. It suffers from a triple threat of feeling contrived, unconvincing and unnecessary. For all the complaints leveled at the story of FFXIII, it was, for all intents and purposes, concluded. The characters had an arc and the story envisioned was brought to an end. The new story, with its flat characters, leans too heavily on the concept of a “paradox” to explain away everything that occurs, whether it’s an actual game element such as puzzles involving connecting the dots, or a plot point that needs resolution. There’s a sense that the design team came up with concepts for the game first, but lacked any kind of narrative logic as to why so many disparate elements would exist in the same world, and thus fell on time travel—and its resultant paradoxes—as the ultimate crutch to justify everything. This is a story that feels out of place with events that have gone on before, and every cameo, every plot point, and every progression in character feels artificial because of it. Perhaps most infuriating of all, however, the team chose to end the game on a cliff-hanger, thus guaranteeing that players either buy DLC for the “true ending” or wait for a Final Fantasy XIII-3 to arrive before the story finally gets closure. For a story that didn’t need to be told in the first place, this is a particularly galling move.

Moving over to the presentation… well, this is a Final Fantasy game. The graphics still make this the best looking JRPG out there, although, surprisingly, it does seem to suffer from a slight frame rate stutter here and there. The art direction is the same mix of colorful landscapes and neon futuristic as the previous title. Like FFX-2, there’s a significant amount of asset re-use going on, with many monsters and even environments putting in a re-appearance. There are plenty of new environments, but the convenient time-travel conceit allows FFXIII-2 to pull a Dragon Age 2 and reuse many of the same levels, sometimes as often as three additional times, with cosmetic changes to indicate the passing of years, while the actual level layout remains identical.

The sound department is also guilty of some significant asset reuse. The actual menu interface and in-game sound effects all use the previous game’s audio library, with a lot of themes from FFXIII putting in reappearances as well. However, there are many new compositions on play here as well, and the best way to describe them is brave and eclectic. Once again, Nobuo Uematsu is not at the helm of the score, and the new team makes a pretty dramatic departure from the mix of ballads and orchestral scores that Uematsu favored. A lot of more contemporary beats and genres appear, including a surprising Nu-Metal rendition of the Chocobo theme. For every song that’s interesting there’s one that’s baffling in its inclusion, but generally speaking, the music takes some chances and succeeds. The piano compositions in particular have an effective, emotive mood but on the whole, this is a pretty radical departure from what FF fans might be used to.

The best and shortest way to explain the mechanics of FFXIII-2 is that this is the way the previous FFXIII was probably meant to be played. With the overly long production cycle for the Crystal Tools engine now out of the way, and a ton of assets already in the library, Squenix’s team could concentrate on actual gameplay, and the results are far more satisfying than FFXIII. It’s obvious that the development team went back to the drawing board with an extensive list of every major criticism leveled at FFXIII, and they addressed every gameplay, mechanical or system problem that was consistently mentioned in reviews.

The infamous linearity of FFXIII is now more or less gone. Levels are smaller, with multiple paths—or in the case of Gran Pulse levels, simply just massive, open spaces—that encourage exploration, rather than a controlled funnelling through a tube. This is expanded on further thanks to the time travel conceit that closes off some areas of levels but leaves the possibility open that level layouts may have changed in a couple of hundred years, encouraging you to revisit that same area in another time period. Towns—of a sort—have also been reintroduced to the world in the form of “safe” areas where players can interact with NPCs and buy or sell items with the crazed, time traveling saleswoman known as Chocolina.

One side-effect of these less linear levels is that while they are smaller, they are also more numerous, with an almost intimidating number of time periods to explore once every area in the central hub, “the historia crux” has been opened up. Another more significant side-effect is that visible enemies on the field have been removed, and random encounters again return to the fold. In this case however, when a random encounter occurs, players have the opportunity to get a pre-emptive strike before combat begins, to give them a slight advantage going into combat, or else attempt to flee and avoid fighting entirely. It’s an interesting compromise between traditional JRPG mechanics and FFXIII’s experimentation that brings out the best of both worlds.

Another welcome change is the pace at which the game systems open up. FFXIII, terrified that players weren’t too bright, kept a tight leash on the combat system and didn’t really allow players to experience it to its fullest potential until about 20 hours into the game. Here, after an hour or less of introductory scene-setting and tutorials, players are cut loose with full combat control once they leave the newbie area and start their time traveling adventure in earnest. The combat is definitely falls in the “If it ain’t broke don’t fix it” category, and remains as fast paced and subtle as ever. A much needed improvement is the ability to change leaders, as FFXIII had one arbitrarily determined party leader for most of the game, and if that leader got K.O.ed in combat, it was game over, regardless of how well other party members were doing, or whether another party member had the ability to resurrect the leader and bring him or her back into the fight.

This may be because of a key change in the party system, which fixes players with two constant party members, Noel and Serah, The third party member, in a dumbed down nod to Atlus JRPGs such as Shin Megami Tensei: Nocturne, is a “collectible monster.” Players now have the ability to “tame” monsters they encounter in combat, add them to a growing collection, use loot to upgrade their stats, and even fuse them with other monsters to transfer desired abilities over. Because monsters themselves are fixed in their roles—as opposed to Serah and Noel who use the previous games paradigm system to switch between magic, melee, tank and other classes—monsters can be put in a “paradigm pack” where three individual roles can be assigned and switched to with a button press. As to be expected from such a system, experimentation yields interesting results and there are already “super recipes” for building the ultimate monster companion floating around on the internet for those with the inclination to have an overpowered combatant in that third party slot.

And finally, the game is far more open to optional activities than the its predecessor. Sidequests, distractions like gambling, and the usual insanely difficult optional monsters are sprinkled at regular intervals throughout the game. The artificial cap on experience points that FFXIII introduced has also been removed, once again allowing players to grind—and overpower themselves—as they see fit. Ironically, FFXIII-2’s greatest success may lie in forgetting about the steps forward its predecessor tried to make, and taking a few steps back to the kind of JRPG its fans expected. All the traditional elements that have re-introduced to FFXIII-2 make for a game that plays much more the way fans might have hoped an HD Final Fantasy game to turn out. The combat is fast, fun and responsive, with enough wiggle room that people who want to truly control every action can do so, while others can opt to let the AI select specific actions while players control over-all roles in the battle. The wealth of environments to explore and the leveling system keep a steady sense of progression, without ever feeling like players are being rail-roaded through the story as quickly as possible, with gameplay being an afterthought.

In the end, Final Fantasy XIII-2 is a game that’s recommended, but with a significant caveat. As a pure game, it’s every bit the JRPG an FF game should be. As a story however, it’s pretty much a failure. If you’re the sort of person that plays an FF game for its systems, you can safely buy this game with a lot of confidence that you’re in for a good time. If you’re the sort of Square fan that cares more about characters and story, the contrived tale and insulting cliff-hanger will probably leave a bad taste in your mouth. Ultimately Final Fantasy XIII-2 is a great game looking for a better story to carry. Other games, like Mass Effect 2, are a more complete package.

If you’re the sort of person that plays an FF game for its systems, you can safely buy this game with a lot of confidence that you’re in for a good time.
REVIEW SCORE
8
File Under: Fantasy, Open World, PlayStation, RPG, Square Enix