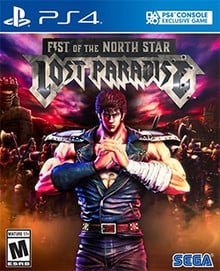 Fist of the North Star: Lost Paradise is what happens when you take the established gameplay formula of the Yakuza series, and apply it to one of the most popular manga and anime franchises in the world.

If you haven’t read or watched any material related to the popular 80’s franchise, Fist of the North Star is set in a post-apocalyptic future where nuclear weapons have obliterated the landscape and dried out the oceans. The series and Lost Paradise follow Kenshiro, a martial artist who is the chosen successor of Hokuto Shinken, a deadly art that allows users to destroy the enemy from within. He’s searching for his fiancee, Yuria, defeating countless enemies on his quest for her. That’s what the series and Lost Paradise have in common because it becomes clear within the first hour of the latter that this is an entirely original story.

Namely, the focal point of Lost Paradise revolves around a city called Eden, which is exclusive to the game’s continuity. Called the City of Miracles, it is here where Kenshiro searches for his beloved, encountering faces both new and familiar on his quest. The likes of Kenshiro’s rival Rei, self-appointed sidekick Bat, and many other classic characters appear in both the main story and side quests, and are joined by a handful of new characters such as the captain of Eden’s city guard Jagre, or its ruler, Xsana. The result is something that mostly works for both fans of Fist of the North Star and people who’ve never seen it before, though it skews to the former. The sheer amount of fanservice and nods to the source material makes for a better experience overall to those familiar with it, as I can imagine newcomers wondering who certain characters are or why they’re important due to their limited time onscreen.

What is easy to understand is the combat, which takes the infamously over-the-top Hokuto Shinken style and merges it with the similarly over-the-top Yakuza beat-em-up. If you’ve played a Yakuza game, it is identical to that system here, with combos, finishers, and dodges working much the same way. There’s also Burst Mode, an overpowered state that powers up Kenshiro’s attacks, and Destiny Talisman’s, which are based off of important characters and convey a number of unique special abilities both in and out of battle, to add some flavor. It’s a good system that fits well with the tone of Fist of the North Star, and it’s one that is fun to use – provided that there’s variety. Which there isn’t a lot of, except when it comes to the large number of special attacks.

The biggest difference in the combat lies in the use of pressure points, where Kenshiro strikes an enemy after they are stunned or weakened by pressing the circle button. You can then press the button again, at which point a context-sensitive move begins along with a quick-time event that normally ends in the opponent exploding into giblets in ludicrous ways. As in, you press a finger into the side of a man’s head, swing him around to hit his pals, and then throw him into the air as his heads bursts from the inside. They’re great to see the first couple of times; they become boring as the hours drag on. Because the animations take several seconds, during which Kenshiro states the name of the attack every time, using Hokuto Shinken becomes tiresome quickly. By the end of the game, I was just spamming normal punches and kicks just so the enemies would die quicker.

Just like Yakuza, the boss battles in Lost Paradise lack creativity. Only a handful of bosses are interesting or present a unique challenge, as the majority simply have large health bars and are difficult to hit. And just like Yakuza, those problems are somewhat mitigated by how these fights are presented – the boss design is strong in this game, which includes characters from the franchise and entirely original ones. A personal favorite is Toki, Kenshiro’s fellow student, who you can fight repeatedly in order to learn new moves in the desert.

Though the game is set in a post-apocalyptic wasteland, the city of Eden is anything but desolate. In another sign of its pedigree, the city is a merger between the desolate, empty ruins of Fist of the North Star and the neon-covered, bustling Kamurocho of Yakuza. It’s not as big as the latter, but it’s a sizeable city that is packed with things to do. People shop in a crowded bazaar, civilians crowd the local bars at night, thugs in Mad Max leather getups roam the streets, and the Roman-style gladiatorial arena is suitably epic. The clashing of all of these elements is what made Fist of the North Star stand out, and in Lost Paradise, it is all lovingly visualized for you to explore.

Where the combat and Eden are strong, driving and the wasteland itself do their best to drag them down. Early in the story, Kenshiro gains the ability to drive through the world outside Eden in a busted up, upgradeable buggy. The driving itself is tedious, as the car never handles well, nor does it actually feel fast despite the speedometer regularly clocking in at over 300 km/hr when boosting. The distances between locations is vast, with the world itself doing it’s best to bore you the entire way. You can also collect materials for quests and upgrades by driving over colored markers in the wastes, which makes driving feel like more of a chore. Though there is a fast travel system, it does little to remedy what is an unpleasant mechanic and setting. Add the roving gangs which function as random battles, and I tried to finish each trip to the wasteland as quickly as possible.

The driving is but one symptom of Lost Paradise’s poor pacing. While I was invested in Kenshiro and the story itself, all too frequently the game would slow to a crawl as you had to complete errand after errand in order to get things moving again. At one point, Kenshiro must go to his hideout from a club, discover that he must go back to the club, only to return and in less than two minutes be sent back to the hideout. Missions must frequently be delayed to accommodate the introduction of a new minigame, undergo a mandatory substory, or collect a set of materials. I enjoyed the narrative, and the characters were interesting, but Lost Paradise made me wait again and again to see the full picture.

Struggle as the story does at times, it’s in the side activities where, much like the Yakuza series, the game truly shines. There’s a large number of substories, the series version of a sidequest, and while some are simple, many more are hilarious or very melodramatic. There’s a host of mini-games to play as well, each with their Fist of the North Star twist to make them stand out. You may have played a rhythm game before, but have you ever played a rhythm game while healing someone by punching them to the tune of Beethoven’s Ninth Symphony? The way that Kenshiro dives head first into these activities is gleefully absurd, whether it’s bartending, playing an arcade game, or smacking motorcyclists with a steel girder at a baseball diamond. The optional content is always the highlight of a Yakuza game for me, and this is no exception.

But I’m a fan of Yakuza – this is the kind of game that appeals to me. Even then, Fist of the North Star: Lost Paradise feels rough. From the combat to the pacing, to the driving, this is a game that does not quite reach the same highs as those in its lineage do. Ye it’s still an enjoyable experience and one that I recommend for fans of Fist of the North Star or those who are craving to play as a post-apocalyptic Kiryu Kazuma.

Fist of the North Star: Lost Paradise may not reach the highs of the Yakuza series that it is so clearly based on, but it’s got more than enough spark to make the journey worthwhile for fans craving something new.
REVIEW SCORE
7
File Under: Anime, PlayStation, Sega