Guardians of the Galaxy: A Telltale Series Episode 4: Who Needs You (PS4) Review 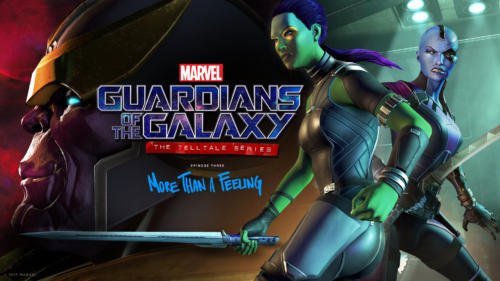 Guardians of the Galaxy: A Telltale Series Episode 4: Who Needs You, goes out of its way to derail the momentum of episode three’s cliff-hanger ending, amounting to what is essentially an elongated waste of time. The best moments are all back loaded in the episode’s final ten minutes, while the two hours that come before it feel like filler, distracting from the real issues at hand.

Following the ending of More Than A Feeling, the Guardians find themselves trapped in a cavern infested by man-eating space worms, toxic plants, and each other’s angsty emotions. In this cave Star-Lord and company wander, reflecting on the situation they’ve all gotten into, but are too preoccupied by this detour to do anything meaningful about it. Telltale’s Guardians of the Galaxy has been a methodical and slow-moving series throughout previous episodes, but Who Needs You feels intentionally designed to prolong the story an extra episode before the eventual finale.

Similar to previous episodes, one particular character gets the spotlight in Who Needs You, and this time it’s the deadpan muscle of the group: Drax the Destroyer. Mantis, who has been sort of a mediator for the group since her debut, uses her abilities to show Peter Drax’s past, and we get a nice scene between him and his deceased daughter. In the midst of all the angry back and forth everyone else in the group seems to be going through, Drax was the only character I found tolerable throughout the entire episode. Along with his flashback scene, Drax is the focus of a pivotal decision late in the episode that could shake the foundation of the Guardians depending on how you react, but this focus on him doesn’t feel like the crux of the episode like it did for Rocket and Gamora. Drax’s spotlight is more or less stumbled upon rather than being a guiding force for Who Needs You, which feels in line with the weird obligatory nature of the episode. This episode has to exist because the series has five episodes and Drax has to get these dedicated segments because everyone else has already had theirs.

This slow pace of the episode seeps into the action sequences as well. I’ve noted in previous reviews for the series that Guardians of the Galaxy has a lack of visual identity and flair that has hindered some otherwise entertaining fights, but Who Needs You feel even less inspired. The most notable one I can recall featured the entire group back to back as they’re surrounded by space worms as the camera simply circled around them while I did the quick time events that followed. The action was almost entirely off screen.

After fighting space worms and exploring the cavern, almost all that’s left in Who Needs You is the Guardians arguing about what happened in the previous episodes and almost nothing that moves any relationships forward until the end of the episode. Gamora and Nebula’s relationship reaches a sense of closure, but by the time the episode’s over it just seems like things happened to artificially push the player into the less than favourable situation on which Who Needs You leaves off.

That’s generally the running theme of Who Needs You that frustrates me so much: every decision, piece of dialogue, and narrative call feels artificially put in place. Who Needs You feels like an episode that is written the way it is because an episode has to exist between episode three and the finale. The penultimate episode of Guardians of the Galaxy feels like a deliberate way to waste time before the actual finale with occasionally meaningful moments sprinkled on.

Guardians of the Galaxy: A Telltale Series Episode 4: Who Needs You was reviewed using “retail” PlayStation 4 download codes provided by Telltale Games. You can find additional information about CGMagazine’s ethics and review policies and procedures here.