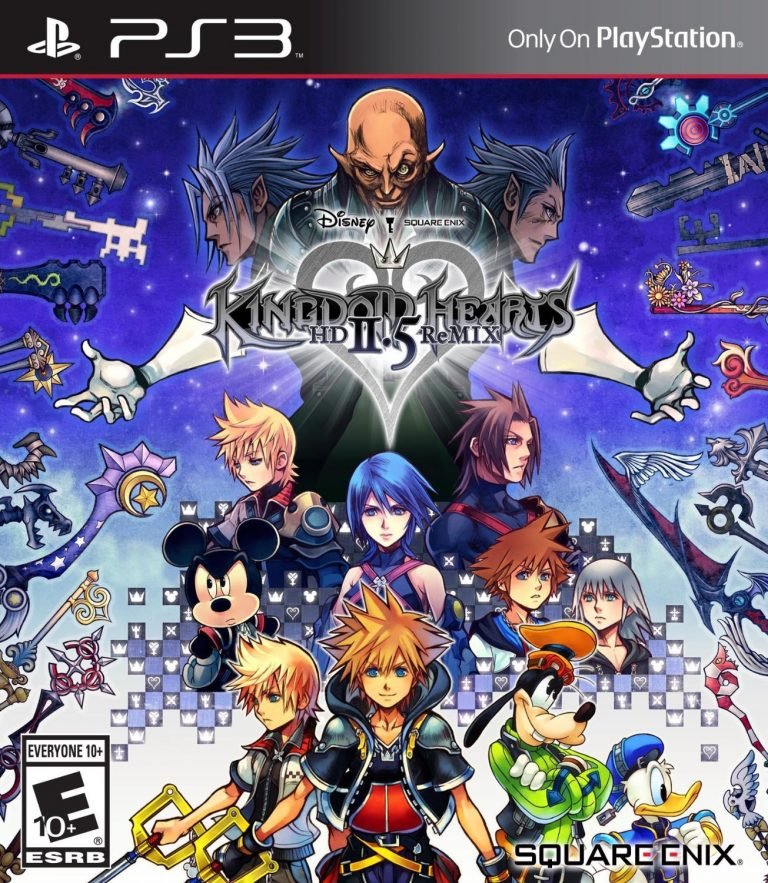 Just in time for Christmas for both kids and for older gamers that remember the PS2 era, Squenix is back with the final piece of their Kingdom Hearts compilation, Kingdom Hearts HD 2.5 Remix. In a lot of ways, this collection is kind of a no-brainer; it was one of the best games of the PS2 era, and if you already bought the 1.5 HD Remix, you pretty much have to get this one to complete your “set.” And in a lot of ways, it’s an even better bargain than that first HD remaster.

Tying It All Together

As with Kingdom Hearts HD 1.5 Remix, this 2.5 HD remaster is actually two “and a half” games. The base game, Kingdom Hearts II, is actually the “Final Mix” version that never saw release on Western shores. Then there’s Birth By Sleep Final Mix, which was a PSP KH game that was only ever officially released in Japan. Finally, there are all the cutscenes from Re:coded, which began life as a mobile game before migrating to the Nintendo DS.

Square-Enix seems to have learned some lessons since the release of the 1.5 remix in September of last year. One of the nice surprises is the drop in price, down to $40 from the $50 of the earlier collection. That’s a bit easier to swallow considering these are PS2 era games, and you’re only getting two of them. It also makes the effort put into the HD remastering that much more of a bargain this time around.

Unlike the first collection, it’s pretty much required that players either read up on the plot of Kingdom Hearts or, better yet, have played the first collection. The story of Kingdom Hearts gets extremely convoluted in this collection, branching away from the simpler adventures of Sora helping out Disney characters and bringing in even more of the byzantine soap opera that is Organization XIII and confusing origins of nobodies, key blade wielders and Xehanort. None of this is particularly easy to get up to speed with just by jumping into the game cold, and it’s definitely arguable whether shifting the focus away from the Disney aspect to more soap-operatic anime plot convolutions was actually an improvement. Still, this is the way Tetsuya Nomura decided to go with the series, and despite more focus on existential teen angst, it doesn’t ruin the main attraction, which is the graphical upgrade and tweaked gameplay.

Square-Enix has once again done an impressive job of bringing these PS2/PSP games to the PS3 with a fine boost to the visuals and smooth framerates and a much needed resizing to the 16:9 aspect ratio of modern TVs. Old fans will notice some new cutscenes added to KH2 thanks to the “Final Mix” additions that were never seen in the Western release, Birth By Sleep never made it to the West at all, making it an extremely valuable addition to this collection. It’s likely there are a lot of Kingdom Hearts fans out there that didn’t love the franchise so much they thought it was worth learning Japanese just to play an extra game, so this is a big win for English speaking fans. Like the 1.5 Remix, this is the first time that Kingdom Hearts fans have had a chance to experience all the storylines on one platform—excepting the newest release Dream Drop Distance on the 3DS—and it’s still a world spanning adventure that takes players to some interesting places. Sora running around in the “CG” world of Tron is still a nostalgic sight to behold for those that remember the movie.

In the end, although the compilation is only available on the PS3—a more serious limitation one year into the new console generation—it’s a great HD collection for fans. The Square-Enix internal teams don’t go cheap when it comes to remastering their own titles, and Kingdom Hearts 2.5 is fantastic addition to your HD remaster collection, if you’re into that sort of thing.

As with Kingdom Hearts HD 1.5 Remix, this 2.5 HD remaster is actually two “and a half” games.
REVIEW SCORE
9
File Under: Kingdom Hearts, PlayStation, Square Enix