Rise above the Earth 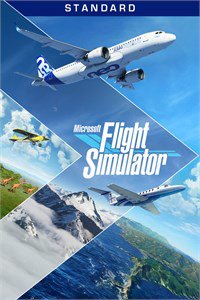 Videogames for me are generally an escape and my preferred form of entertainment, which usually means I prefer games that go for bombast or spectacle, over realism and verisimilitude. Simulation games are not something I actively seek out for the reasons mentioned above, yet, something about Microsoft’s latest instalment in their renowned Flight Simulator series of games, immediately jumped out to me.

After the exceedingly long 150GB+ install, my patience was met with a sense of discovery after finally being able to jump into the game proper. Flight Simulator 2020 features a suite of challenges and recommended routes and destinations, however, the true beauty of the game is that it is ultimately up to the player to make their own fun, by freely choosing where to explore, mapping out your own routes, stops, destinations and landmarks that populate the (literal) game world.

Flight Simulator 2020 uses a mix of different technologies in order to deliver a mostly convincingly depiction of the Earth. Real-world map data and imagery from Microsoft’s Bing search engine populates the environment, overlayed on top of computer-generated terrain provided by Blackshark AI and human-made structures, such as cities and landmarks. The photogrammetry data, a technique also used in games like Resident Evil 7 is supplemented by more traditional, artist-rendered assets, particularly for landmarks and standout structures, which helps elevate the sense of realism found within the game.

Simply put, Flight Simulator 2020’s impressive tech backbone ultimately coalesces into a shockingly-believable rendition of the real world, complete with detailed buildings and foilage that only lose their realism when scrutinized up close. Particularly, in regards to trees that tend to incorrectly spawn-in as strange polygonal blocks. Other small but notable details include motorways and streets that are populated with moving traffic, Ground Airline operators and even, animals when appropriate.

It can’t be said how surreal and cool it is to find real-world locations from your own life rendered in enough detail to be recognizable to the player. Structures and landmarks that are well known tend to be better realized as they designed by artists, whereas swaths of metropolitan and other areas mimic their real-world counterparts well enough to create a believable sense of space, but ultimately lack the finite detail up close, primarily due to the lower-resolution photogrammetry assets.

The staggering amount of detail found within Flight Simulator comes with a cost. Even on two of the machines, I tested the game on, which came equipped with a 10th gen Intel CPU and an Nvidia 2070 Super (laptop) and a desktop with a Ryzen 7 3800XT and a Radeon 5600 XT build. The game ran at an average of 25fps at 1080p on medium to high settings to 45fps on the latter, desktop build. In other words, Microsoft’s Flight Simulator 2020 will be an ideal benchmarking tool for the next little while for PC game enthusiasts.

One of my favourite aspects of Microsoft Flight Simulator 2020 is the flexibility in its approach to gameplay. I was somewhat apprehensive in jumping into the game as this was my first exposure to the series. Fortunately, thanks to the various available toggles that let the player finely tune how realistic they want their flying experience to be, Flight Simulator 2020 can be a pick-up and play experience, or one that should scratch that purist itch for those wanting something more immersive.

In fact, the amount of detail and nuance put into some of the more advanced functions of the higher-end aircrafts, complete with the dozens of fully modelled and mostly functioning cockpit controls, make entering the different available aircrafts in the game, an experience in its own rights. Players looking to play the game casually should use a controller paired with a keyboard for some of the more obscure shortcuts. I found myself needing both as I have a tenkeyless mechanical keyboard which lacks the numb pad, something that is required for some auxiliary functions.

When booting up the game for the first time, I recommend players check out the tutorial which unfortunately is limited to the Cessna model plane, but offers a well-rounded discourse in getting the basics down, especially for those wanting to play the game casually.

My only complaint with Microsoft Flight Simulator 2020 is the lack of finite control when picking where to fly. As the time of this review, it is only possible to choose your departure and arrival airport, or by manually selecting a point from the world map. It would nice if there were an option to search for landmarks directly rather than having to find them on the map manually.

In summary, Microsoft Flight Simulator 2020 offers an unparalleled realistic flying experience, one that is accessible enough for newcomers to enjoy casually, while still catering to the veterans and enthusiasts that want to experience the simulation aspects of the Flight Simulator series.

Microsoft's Flight Simulator 2020 heralds the return of the beloved simulation series, bringing with it a first-glimpse into the next generation of simulation games.
REVIEW SCORE
9
File Under: Microsoft, Xbox