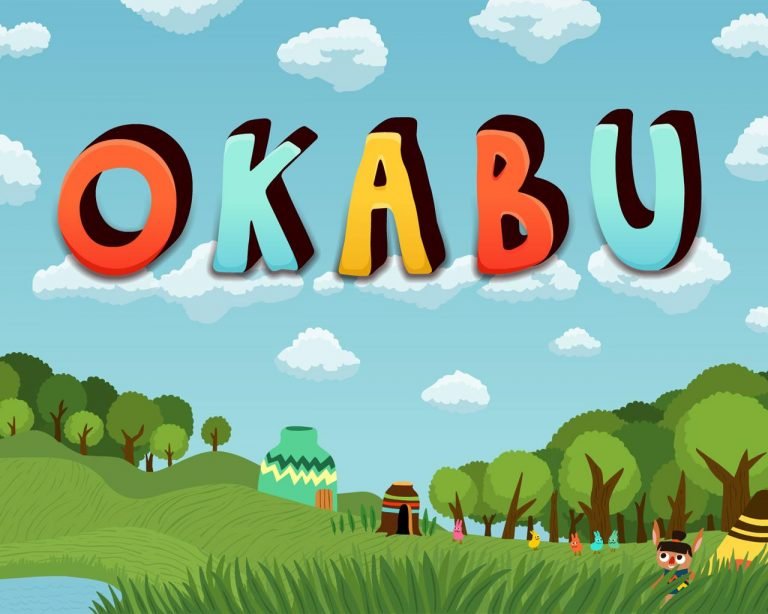 In 2008, small-house developers HandCircus released Rolado, a LocoRoco-looking but generally original action puzzle game that was, at the time, a rarity. It was a legitimate iOS game, the first of many, and well ahead of the pack. This year, HandCircus is treading new ground, though mostly new grounds for them. Okabu, a 3D puzzle adventure, is part of PSN’s push for more exclusive titles, and looking to celebrated iOS creators for that new content is a sound idea. HandCircus’ colourful panache filters through on the console upstep, though the wispy world of Okabu is a bit of a breeze.

You (being either you alone or you and a couch bud) are cloud whales Kumulo and Nimbe, a rarely-seen magical species whose known kindness is adored by the quirky Yorubo, the inhabitanrs of this happy world. Unfortunately, not all is clean, clear skies, as the mechanically-obsessed and sludge-spewing Doza are looking to conquer more land through force and homing missiles. Strong environmental undertones consummate the overall theme, sure, but never really pushing it beyond “pollution is bad” and “recycling is good” means younglings would fare better skimming a DVD box set of Captain Planet.

While the colour palette may squeal back to LocoRoco and Katamari, the game’s heart is more akin to the Lego games of recent history. The worlds, four in total, are divided into levels, each filled with puzzle-masked tasks that require you to move about the landscape while partnering with cloud-riding characters, each offering specific abilities. Some riders give you the ability to hookline objects, while others let you control certain machinery, though all can manipulate the world in some way. Without them, the clouds can absorb water and oil. The puzzle genre has taken certain stretches and liberties over the years, and it feels a little misleading to suggest anything about this adventure is challenging to the mind. There’s no strain when an arrow remains pointing to your destination and all solutions are a routine from the last. Those addicted to challenge can hunt down the cleverly-hidden eggs throughout, and do their best to beat a surprisingly demanding time trial.

While the “puzzles” are fairly clean-cut, the physics can be murky at times. Scratch that up to a first-time attempt at a 3D title, sure, but chaos consciously reigns on too many occasions. Objects, boxes and spheres – oy, spheres – can have a mind of their own, and while their destination and purpose can be a bit forgiving, the commute can prove to be the true grievance. All the flotsam is stubborn to move but bounce away as if they’re helium loaded. Getting close to enemies is a pain too. There are many ways to deal with the missile-barfing Doza, but you’ll go out of your way to choose the one with the most range. The Doza have an affinity for heat-seeking missiles, spittle out like a broken pipe, and while you can’t die and there’s no health to lose, getting hit knocks you out and your rider off your back, forcing you to float back to the last re-spawn tree to pick up your companion again.

The most admirable thing HandCircus has immigrated over to the PS3 is their colourful, storybook art direction, which comes out even better in 3D than it did in the 2D Rolando. Much like the Lego games, the camera is on a fixed path, following you from a distance against an expanding wall which gives it all, especially with the palette, a pop-up panache. The first half of the game steadies at a contemporary cartoon-mindedness, but when you enter the forest and the night shadow blankets the tinkering tribes Okabu finds visual harmony, even if it doesn’t always show. The music is nice, and has the high-quality energy of any world-music guest on Later…with Jools Holland, but with such limited tracks it can at times overstay its welcome with repetition.

I can’t imagine anyone but a fairly young gamer will enjoy Okabu to its fullest. It’s rarely challenging, and the smiling, colourful world, as nice as it looks, may make older gamers feel like they’re being talked down to. The easy-going pace, and even the calamity of its floaty physics, is something of a virtual toybox. Regardless of age, it’s best suited for two, but regardless of even that this cloud is too thin to feel completely engaged with.

It’s rarely challenging, and the smiling, colourful world, as nice as it looks, may make older gamers feel like they're being talked down to.
REVIEW SCORE
7
File Under: Adventure, PlayStation