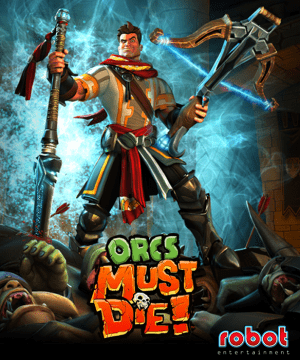 Don’t you hate orcs? They’re smelly, disgusting, beastly creatures who wish nothing but death and destruction on us humans. They attack in large numbers and leave nothing but blighted earth in their wake. From Tolkien to Warhammer, orcs are vile evil hordes that will step over their own mothers (do orcs have mothers?) just to taste some of that tasty man-flesh. So when the crew at Robot Entertainment says Orcs Must Die!, my reply is an enthusiastic “Where do I sign up?”.

Some orcs just need killing. Orcs Must Die! is the first original title from Robot Entertainment, after having worked on both Halo Wars (X360) and Age of Empires Online (PC). The premise is simple: your mentor is dead and the orcs are attacking, so it’s up to you—a young, brash, and arrogant sorcerer’s apprentice—to defend the “rifts” and keep humanity safe from wave after wave of orcs, ogres, kobolds, gnolls, and other chaotic beasts. As satisfying as it might be, you won’t have to slay all these orcs with your bare hands. With your spellbook in hand you’ll be able to set up all sorts of traps and spells to keep the hordes at bay. With your spells and traps you simply need to crush, pulverize, launch, boil, slice, and dice every single orc, gnoll, and kobold before they get to the “rift”. If too many enemies make it into the rift, all is lost and the orcs win.

Orcs Must Die! plays like your traditional hack and slash adventure but with a twist. Any orcs that make it past your traps and devices must still be dealt with. You can use your magic crossbow to attack the hordes at a distance, or switch to your Bladestaff and take the fight right to their ugly faces. The camera is situated behind the apprentice, which limits your field of view, so you’ll actually have to move around the environment to take it all in—a feature which I liked. Too often I’m forced to observe a battlefield from a top-down or high camera position. This is not the case with Orcs Must Die!. Having the camera much lower and directly behind the apprentice is a welcome change for games like this which drip with tower-defense elements. It really allowed me to witness the brutal punishment which I was inflicting, while also giving me the freedom to look around the environment to find other sneaky places for traps. Orcs Must Die! really succeeds in combining tower defense with an excellent action combat experience.

The most surprising thing about Orcs Must Die! is the amount of polish that Robot Entertainment was able to put on the art. Everything—and I mean everything—looks absolutely fantastic. The art style is a little cartoony, but that meshes well with the game’s not-so-serious tone. Speaking of which, I almost forgot: this game is actually really funny. The apprentice (being a young, arrogant fool with little-to-no respect for the time and study it takes to be a sorcerer) manages to keep things pretty light and casual, despite the dire situation where he now finds himself. His personality is a mixture of Ash from Evil Dead, Charlie Sheen, and that annoying friend we all have who does nothing but talk about how awesome he thinks he is. This composition of personalities allows for some delightful one-liners (at the orcs’ expense of course). The soundtrack also contains an air of levity. While fighting hordes, you’re treated to some adventurous death metal, which really adds to the frantic nature of your defense. Once the battle is complete, a new tune strikes up and the apprentice begins a celebratory hustle to some form of medieval hip-hop. I liked both songs and my only complaint is that I wish there were more of them. Especially that medieval hip-hop groove, that’s my jam!

Orcs Must Die! is an excellent first outing for Robot Entertainment, and I can’t wait to see what this studio does next. It’s fun, clever, looks great, and satisfies that little part inside of all of us that can’t help agreeing that Orcs Must Die!

Orcs Must Die! is an excellent first outing for Robot Entertainment, and I can't wait to see what this studio does next. It's fun, clever, looks great, and satisfies that little part inside of all of us that can't help agreeing that Orcs Must Die!
REVIEW SCORE
8
File Under: Action, Fantasy, PC, Strategy