A Triumphant Return of the Retro Raccoon 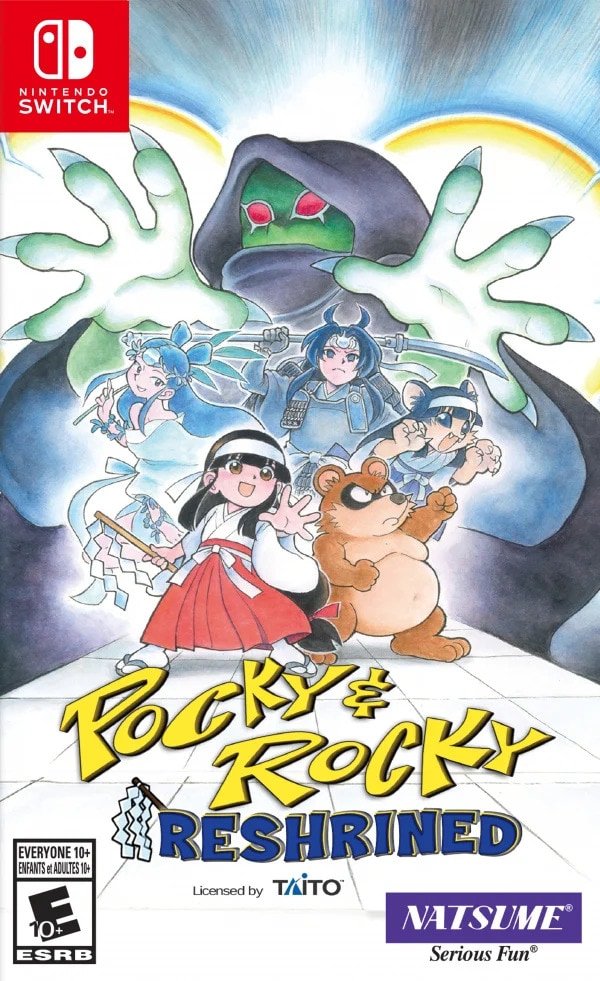 When it comes to third-party Super Nintendo must-plays, for me, the original Pocky & Rocky immediately springs to mind. Over the years, the series has mostly laid dormant, with a few half-hearted attempts at bringing everyone’s favourite shrine maiden and tanuki back into the limelight across various ports and pseudo-sequels, with titles such as Heavenly Guardian on the PlayStation 2 and the less-than-stellar Gameboy Advance iteration of the first game.

Over two-decades later, Pocky & Rocky are back with Pocky & Rocky Reshrined, heralding the return of the series proper since its direct follow-up sequel was also released on the Super Nintendo. Those unfamiliar with the franchise, Pocky & Rocky first made its debut in the arcades in the late 80s, later finding success on the Super Nintendo with improved graphics, gameplay mechanics and emphasis on story elements. Reshrined, like the originals, can be classified as an action game—however, in truth, the series is much closer to a shoot-em-up title or ‘SHMUP’ as it is sometimes colloquially referred to as.

Unlike other shoot-em-up titles that generally restrict movement on a single horizontal plane, Pocky & Rocky Reshrined allows players to move freely both vertically and horizontally. In terms of story, Reshrined, as the name may allude to, is a followup to the SNES titles that remixes locations and characters, ultimately making it both accessible to newcomers and veterans alike. In other words, Reshrined is nostalgia done right.

Aesthetically, Pocky & Rocky Reshrined features 16-bit-inspired sprite work that goes beyond recreating the look and feel of the 1992 title, modern flourishes such as an ethereal wisp of light when undead enemies are purified to reflective bodies of water that utilize modern techniques transform Reshrined into a contemporary classic. The benefit of modern hardware also ensures the Unity made game runs at a rock-solid frame rate, something the original SNES had issues with maintaining. Pocky & Rocky Reshrined also features a CRT filter that does a well-enough job of creating that retro look some players may desire. Different aspect ratio options are also available for those who want a pixel perfect screen as the default 16:9 image is wider than the graphical elements on screen.

“Unlike other shoot-em-up titles that generally restrict movement on a single horizontal plane, Pocky & Rocky Reshrined allows players to move freely both vertically and horizontally.”

As far as games made in Unity are concerned, Pocky & Rocky Reshrined is an exemplary title that masterfully blends old and new game design techniques together in one fantastic package.

Like the 8 levels present in the game themselves, Pocky & Rocky Reshrined’s sound design equally embraces its roots with remixes and new takes on the classic chiptune tracks found in the original. If it isn’t already obvious, longtime fans of the series are encouraged to check out Reshrined, and for those who are into collecting physical media, ININ Games has physical copies available of Pocky & Reshrined to add to your shelf, ideally next to the old Super Nintendo Cartridges of the originals.

Gameplay has also seen a notable bump in modernization with refined and nuanced gameplay elements that slowly build on the initial shooting and sweeping action. An example of this, is the ability to now hold down the button to shoot, which at first seems like the ideal way to quickly dispatch foes, however, players soon are rewarded with abilities that augment gameplay and require some button mashing to set up. Also a first, the story mode of the game shifts between both Pocky & Rocky (in addition to some new characters) that all feature unique abilities that help not only keep things fresh but also give each character their own, distinct personality and feel.

If I had one minor gripe with the game, it would be not being able to quickly restart a level from story-mode without having to back out to the title screen, something I found myself doing quite a lot during the latter half of the adventure.

Although not a particularly long game, Pocky & Rocky Reshrined is a challenging but fair shoot-em-up experience, one that rewards taking your time and mastering the nuances of each of the playable characters. The addition of checkpoints also helps alleviate some frustrations of the classics. At the end of the day, Pocky & Rocky Reshrined is a must-buy for fans of the series and should at least be looked at by those who appreciate sprite-based titles or are in the mood for a good old-school SHMUP with modern sensibilities.