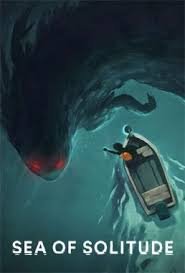 Sea of Solitude is a deeply personal story about one person’s struggle with mental illness, bullying, and floundering relationships told via a 3D platformer about a monster girl in a boat travelling around a flooded city filled with giant Jim Henson-like creatures that would feel at home in The Neverending Story or The Dark Crystal films.

A premise that sounds absolutely amazing on paper that I’m sad to say is completely botched in execution. The developers clearly put a lot of emotion into this game, and that is why it is so painful to have to write this review.

It gives me no joy to write about just how much I dislike Sea of Solitude on pretty much every level but aesthetically. This dreary affair lasts just barely 3 hours, which is a runtime I felt thankful for as I don’t think I could have stomached much more bland platforming with segments clearly meant to pad the length of the game. Nearly the whole time is spent jumping between the same handful of rooftops with varying degrees of sea level, which while a cool idea that was executed excellently in that one very good Super Mario 64 level, completely falls on its face here. The platforming is slow and clunky, and seeing the same generic-looking buildings repeated throughout the game does not help.

The marketing for Sea of Solitude would have you believe there is some deep storytelling to be found here, but there isn’t. The game lacks any subtlety in its story or writing. Practically as soon as you’re introduced to each of the wonderfully designed creatures the game just straight up tells you “This is the main character’s brother/mother/dad/boyfriend” which defeats the entire purpose of them not just being humans. Just in case it wasn’t clear that the girl that looks like the main character in the shell is a representation of her self-doubt, the game practically shouts it in your face over and over. This is a problem with practically every character, like, we get the point, you don’t have to keep reiterating it so blatantly and in our faces. I feel like the person that wrote this game is thinking they are changing lives by making such bold statements as ‘don’t be self-centred’ and ‘have empathy’ and ‘sometimes relationships don’t work.’ Shakespeare this is not.

The rotten cherry on top is the downright bad voice acting, at least for the main character who talks the most. It makes no sense for her to have such a strong accent when practically no other character does, nor does her younger self. Perhaps the character was adopted, or the person voice acting them speaks English as a second language, but whatever the reason it is never revealed. I have nothing against having an accent if it makes sense in the game’s setting and the voice acting is actually good, but here it is downright grating on the ears.

Sea of Solitude is a sound and working game with cool character designs and nothing else even remotely enjoyable to me. The platforming is weighty and unsatisfying, the environment is repetitive and bland, the voice acting is downright dreadful, and the story has all the nuances of a piano being dropped on your head for 3 long hours. Much like the similar and equally boring Submerged, Sea of Solitude will be quickly forgotten.