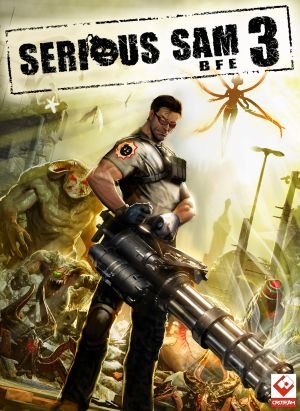 Serious Sam 3: BFE is what your grandparents think every videogame is like. Freakish enemies, blood-soaked visuals, a heavy metal soundtrack and levels filled with colourful power-ups. It is, in short, an embodiment of the stereotypes that formed around early shooters. Luckily, that’s sort of the point.

Croteam, BFE’s developers, make the kind of games that aren’t really released anymore — the kind concerned more with engaging the instinctual, reptilian brain than the thoughtful, mammalian one. BFE is, like the DOOMs and Quakes before it, all about fast reaction times, on-the-fly combat strategizing and a manic pace. After proving the validity of this formula in Croteam’s first game and, in lieu of reinvention, refining it through sequels and HD remakes, it seems inevitable that Serious Sam 3: BFE would continue on in the same vein as its predecessors. And it does.

It is a prequel to the story of the earlier games (rather than spell out the acronym in its official title, Before First Encounter is referred to as BFE) but that hardly matters. Serious Sam has never placed much emphasis on narrative; instead, the franchise is concerned with the gameplay. Aside from a current-gen facelift (the improved audio/visual fidelity is nice but not, by any means, groundbreaking) Croteam has also made a few changes to the foundation of its series with BFE.

New features include decidedly modern (gasp!) elements like sprinting, iron sight aiming, manual reloading, destructible environments and melee attacks. Diehard Sam fans, ready to cry foul at BFE’s apparent concessions to the conventions of contemporary shooters, can put their backs down. These features are intelligently implemented and make only subtle changes to the series’ basic formula. There is no downtime required between sprints, precision gunplay has as many strategic downsides as ups, deteriorating cover makes for more exciting fights and the melee attacks are simply a fun alternative to point-blank shooting. The new features blend seamlessly with old ones and help to make for excellent gameplay.

The fun of travelling through a level is only dampened when an area’s confusing layout grinds progress to a halt. After the frenzy of one of the game’s arena-style showdowns (much of the fun in Serious Sam titles comes from enduring nearly endless waves of enemies) the player will likely be turned around, forgetting where they were trying to get to before the battle started. Each level’s repetitive aesthetic (Egyptian cities, Egyptian ruins, Egyptian tunnels, Egyptian plains, etc.) compounds this so that, following the exhilaration of BFE’s run-and-gun combat, there’s almost always a frustrating requirement to hunt for the entry to the next area.

Fortunately, the sheer joy of BFE, when a given level finds the right momentum, is unparalleled. Despite the repetitive nature of each stage (players shouldn’t expect much more to the game than the challenge of facing off against increasingly difficult enemy hordes), simply shooting the large variety of guns and hanging on through an enemy encounter is really fun.

BFE’s multiplayer modes also hearken back to the kind of play that’s been all but forgotten in recent years, and do a lot to compensate for the campaign’s drawbacks. The co-op modes allow up to 16 players to enter a given session and transform the single-player mode’s more tired moments into frantic experiences. Cooperative survival modes, “beast hunts” and variations on the traditional campaign come together nicely with the head-to-head multiplayer’s line up of styles (Deathmatch, Capture the Flag and a healthy number of other types) and make good on the old school value of having more fun with others.

BFE is an extremely fun package with very minimal downsides. The real miracle is that such a derivative sequel — a sequel to games made in direct homage to other games — feels so fresh. Great gameplay, a dearth of multiplayer options and this sense of originality all make Serious Sam 3: BFE well worth playing.

The real miracle is that such a derivative sequel — a sequel to games made in direct homage to other games — feels so fresh. Great gameplay, a dearth of multiplayer options and this sense of originality all make Serious Sam 3: BFE well worth playing.
REVIEW SCORE
8
File Under: PC