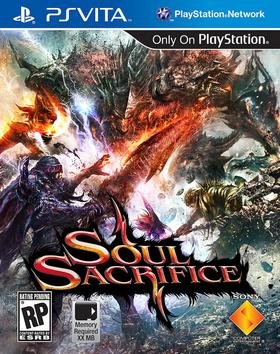 Another Reason To Break Out The Vita

The Vita, despite being probably the best portable gaming unit currently available, is having a rough time of it. The technology is impressive to be sure, and some games, like Gravity Rush and Persona 4 Golden are great games to play regardless of platform, but those games are few and far between. The rest of the time, Vita owners have little reason to turn on their machines aside from the occasional cross play title that works across both the PS3 and Vita. So while a dearth of quality games is definitely valid criticism of the system, Soul Sacrifice at the very least, chips away at that argument. It’s not the Monster Hunter clone many were hoping for, but that doesn’t mean it doesn’t have its own unique merits.

Soul Sacrifice is a story told entirely in flashback. The player is a nameless prisoner held by an evil sorcerer named Magusar. Things seem pretty straightforward, with a confrontation against Magusar that is more execution than fair fight, when a mysterious talking book appears in the cell. By reading the book, the player relives every adventure written in its pages, gaining the knowledge, experience and power required to eventually face off against Magusar. Keji Inafune, creator of Megaman and this game, is obviously a big believer in the power of self-improvement through literacy. As the player progresses through the story in the book, a tale of death and sacrifice continually emerges as various sorcerers are confronted with their own moral dilemma of how far they are willing to go in pursuit of power for their goals. It’s not spoiling anything to say that these tales don’t usually end with a nice pot of tea, crumpets and chat.

On the graphics side, this is once again a pretty showcase for what the Vita can do. Environments are large and detailed, as are the characters, and there’s no significant drops in performance when the game is in play. While it’s not quite as jaw dropping as Uncharted, this is still a title with enough graphical punch that were it outputted to a TV screen, it could hold its own as a console game. The art direction—in typical Japanese fashion—shows a lot of imagination, with the environments in particular sporting some unique features, like a farm that cultivates wings, and a huge a cathedral dotted with giant cocoons. There’s also a bit of character customization that allows players to create their own look for their avatar. All in all, it’s a good looking game, will impress viewers with the fidelity of the portable graphics.

Sound is of a similar caliber, with a budget put aside for an orchestral score that establishes the dark tone of the game. The voice acting, unfortunately, is of typical Japanese caliber, meaning that the best that can be hoped for is adequate delivery, and at worst, stilted and not very convincing at all. It never sinks to the level of “Jill Sandwich” infamy from Resident Evil, but this game won’t be winning awards or getting noted for its stellar acting. On the other hand, the sound effects are well done, and make use of stereo directionality, so this is one of those games that benefits from playing with headphones. The rich music and bass from explosive magic are good enough that it won’t feel right to just make do with the built in speakers of the Vita.

For the fans of Monster Hunter that just wanted a reskinned version of Capcom’s former PSP friendly franchise, there may be some disappointment. True, Soul Sacrifice is about as close to the departed series as Vita owners can currently get, but that doesn’t mean it’s the same game. There are monsters. There is monster combat. There is online and ad hoc co-op play. There’s even a crafting system of sorts, but there’s no “hunting” here.

Monster Hunter was about players stalking their prey across a series of areas, killing it, and using the retrieved parts as components to make better weapons and armor. Soul Sacrifice is about sorcerers reliving a story about Magusar, or taking on various jobs from a group called Avalon, in the service of defeating monsters—and people—and then deciding whether or not to “save” their soul, returning them to an uncorrupted form, or consuming that soul for personal gain, thus killing the victim in the process.

The big differences between to the two IPs come in the form of how this combat is handled. Both of them are real time, and require a certain amount of finesse as powerful moves take time to execute, but Soul Sacrifice actually has a lock-on feature, something Monster Hunter is unwilling to completely embrace even to this day with the new Wii U version. Monster Hunter has huge areas that span multiple levels requiring players to load in and out as they chase their prey. Soul Sacrifice puts players in one massive arena, with the demon already present, no hunting required. In Soul Sacrifice the big challenge is not in tracking down the monster, but handling the “lifespan” of weapons during the course of the fight.

Soul Sacrifice takes the very different tact of giving players many, MANY options for combat via spells or “offerings” as the game calls them. One set of spells grants big melee fists to pound on enemies, while another sends trails of flame or ice at foes and still another launches poisonous “mortar shells” or heals players within range. The catch is that every single one of these offerings is limited in use, some of the more powerful offerings being usable no more than two times before breaking. Scattered throughout each battlefield are a few “recharge” points that players can use to add a few more “charges” to all of their spells, but only a few, it’s not a complete refill. This adds a sense of “tense economy,” to the fighting as misfires mean wasted, limited ammunition. These offerings can also be boosted, which means increasing their effectiveness by combining multiple versions of the same offering, or turned into something else altogether by fusing two different offerings for a new one. It easy to see even from a cursory look that the offering system has a lot of depth, and can take some grinding in order to get coveted, higher power offerings through fusing and boosting the offerings given out as rewards for successful mission completion.

Into this mix is thrown the save/sacrifice system, which applies not just to combat, but also to companions, be they NPCs or other players. An RPG-lite system of increasing health and attack power is directly tied into this system. Upon defeat of an enemy, players have the option to save or sacrifice them. Saving an enemy grants life essence, which can boost the players health—up to a maximum of level 99—and can be used as a component in “sigils” which are extra accessories that can be added, like tattoos to boost certain kinds of performance. Similarly, sacrificing an enemy will boost player attack power, also up to level 99, and yield soul essence, which can be used for different kinds of sigils. It gets even more strategic when it moves over to players and fellow NPCs. When a companion goes down, saving them will take some player health, but bring the companion back into the game to continue playing. Sacrificing, on the other hand, will permanently kill and NPC companion—or take a fellow player out of the fight—at but grants a high power spell that can turn the tide of a fight. Of course, whether to save or sacrifice is entirely up to the player, so in online or ad hoc games, downed players are left to the mercy of their companions, which—as with most multiplayer—can be a rewarding or incredibly frustrating experience depending on the quality of fellow players. It opens up a world of tactical possibility that can make both friends and enemies and make an exhilarating or harrowing night depending on what happens.

So far, so good, right? This sounds like a top tier game, but there are some significant blemishes on these hardcore ideas. The single, biggest offender is the game’s own desire to make sure players can have their cake and eat it too. Soul Sacrifice has a built in “do over” mechanic called “lacrima.” In true Japanese fashion, these are tears (or some other kind of fluid) leaked from the book being read. After every successful mission, more lacrima is available from the book. Lacrima allows players to undo EVERYTHING. If you want to respec your character’s levels from saving to sacrificing, lacrima can do that. If you lose a valuable offering because you broke it from overuse during combat, lacrima can bring it back. If you sacrifice an NPC companion in order to get through a tough fight, lacrima can resurrect him or her. It’s understandable why Marvelous would do this—after all, what RPG fan doesn’t like tweaking a set up to absolute perfection—but it completely undermines the idea that this game is about making choices with serious consequences. There are no consequences; lacrima rewrites anything if you’ve got enough of it, and you probably will.

There’s also a sense of repetition that sets in pretty quickly. That’s because of the small choice of venues available to the player. There are only 14 locations to play in, and they don’t change in size or scope as the story and other missions progress, so by the time the halfway point is reached, every location is known. Due to the steep requirements to boost or fuse higher level offerings, there’s going to be some old school grinding out of missions over and over again to get those components, so you’ll be seeing those same levels a LOT if you’re serious. It’s also not a very long game if you’re just trying to complete the story, which can probably be done in 8-10 hours depending on skill, though this ignores the MASSIVE array of side-quests available that actually make up the bulk of the Soul Sacrifice experience.

In the end, for Monster Hunter fans, or just action-RPG nuts, Soul Sacrifice is a worthy purchase for the Vita, but it’s not a perfect one. It’s got a short main story, and the grinding syndrome sets in pretty quickly, but it’s got a unique, tense combat system that works beautifully as a solo game or co-op game. It’s too bad the severity of choices is negated by lacrima, but that’s an option the hardest of the hardcore can choose to ignore if they want to make things more interesting. All in all, many hours will be lost in this game, so despite some disappointing concessions, this is still a game worth getting for Vita owners that want an in-depth action RPG.

It’s too bad the severity of choices is negated by lacrima, but that’s an option the hardest of the hardcore can choose to ignore if they want to make things more interesting. All in all, many hours will be lost in this game, so despite some disappointing concessions, this is still a game worth getting for Vita owners that want an in-depth action RPG.
REVIEW SCORE
8
File Under: Action, RPG