Another Win for Nintendo 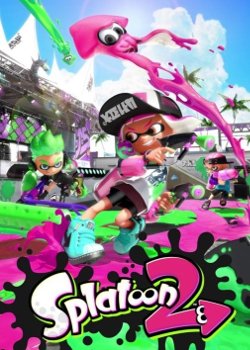 A few years ago Nintendo decided to finally get into that sweet shooting game market that all the kids were going crazy for. There was obviously some hesitation involved from players given that the big N would be going the family friendly route with an ink theme that guaranteed a lack of headshots and gore. What emerged was actually a damn fun time in the gorgeously goofy designed world of Inkopolis. It was instantly beloved by the Nintendo faithful, but unfortunately, it also came out on the Wii U, so it never really stretched beyond the faithful. Well, now the Switch is here, Nintendo’s audience has grown again, and they are bringing back Splatoon to hopefully make the masses squeal. Surprisingly, it’s not a repackage à la the admittedly awesome Mario Kart 8. Splatoon 2 is a full-on sequel with new bells n’ whistles and all that jazz. The game is a damn good time, fixing most of the small list of complaints levelled onto the first Splatoon…but sadly not all of them.

First things first, even though Nintendo has made a big fuss about offering “local multiplayer” this time, unfortunately, it’s not the split screen couch co-op that you might be hoping for. It just means you can easily play games locally between friends who also own a Switch and a copy of Splatoon 2. Sigh. That’s a big let down. Thankfully, there aren’t many more. Splatoon 2 is essentially a bigger and better version of its underplayed predecessor. The basic hub world, matches, and even most of the levels are the same. It’s just bigger, prettier, and more satisfying. First of all, the game looks gorgeous. The Splatoon characters and world design were always delightful, looking like a neon acid fantasy of a kiddie cartoon. That’s still true, but now it’s more detailed, brighter, and even more charmingly warped. Oh sure, it’s still a Switch game and likely will show age quickly if the 4K revolution ever arrives en masse. For now, this is one of the prettiest looking titles on Nintendo’s new system.

Controls are roughly the same. It’s a basic shooting game set up except the Y-axis is motion controlled. When you get the hang of it, this can actually lead to some satisfying rapid fire aiming and gameplay. However, it can be turned off, with all controls put on the joystick for those who like the comfort of familiarity. The hub world is familiar, yet slightly larger and with space for players to bump into each other like a Miiworld electro dance party. The main event remains the online multiplayer and it is the same joyous explosion of ink, colour, and family-friendly firepower that it was on the Wii U.  The stages are a little more elaborate, but competition remains just as fast and furious, with players diving in and out of squid swimming and ink-flinging at an electric pace.

It’s a joy to play—a satisfying shooter with enough unique elements to give the Splatoon-iverse its own personality. It’ll suck up days of competition, especially since Nintendo has promised to regularly drop new stages, items, and weapons throughout the first year of release. All that said, I still wish that you didn’t have to wait for a full line up of players to join a match before it can begin. So much time is wasted waiting for a match missing a single player to sign in that never comes to fruition. Nintendo really should have found a way to let drones fill out empty slots so that more matches connect. Maybe next time and who knows? If more people buy Splatoon 2 than the last one, it might not be a problem for long.

There are of course new weapons this time. How could there not be? You’ll be stuck with a basic ink shooter to start, but soon things get interesting. My favourite new weapon was one of the most simple: The Dualies. You get an ink gun for each hand and to complete your vintage John Woo fantasies, there’s also a unique dodge and roll mechanic that comes with those guns. It’s every bit as fun as it sounds. Other new weapons include special items like a lock-on rocket launcher and a jetpack that sends you blasting into the air to fire down ink bombs on your opponents. The creativity of these new items was undeniable and they all mixed well with old faithfuls like the Ink Roller (which moves a little faster this time, thank god!) without anything seeming too powerful. More will come, and likely will be weapons and items even more impressive than the launch newbies. It all adds to a formula that works without overwhelming the Splatoon core that already earned a cult of players on a fairly failed system.

There is a single player mode, and like last time it feels more like a long side-quest than the core element of Splatoon, yet it too is still an improvement on its predecessor. There’s a loose and simple story about helping one-half of The Squid Sisters find the other missing sister. Not that it matters much. This whole thing is an excuse for ink-swimming platforming with amusing puzzles and insane bosses that can help players improve their skills. It’s a chance to master the controls and pull off platforming tricks that will help in the online battles, as well as a way to preview weapons that you haven’t previously unlocked. While I likely wouldn’t run to the first player story over a few rounds online unless it was tough to get enough players for a match, but there’s no denying the charm in the design as well as the improved challenges, visuals, and especially the boss battles. Seriously, these bosses are nuts even by Splatoon standards. Wanna fight a giant angry oven that spits out evil loaves of bread? Perhaps you’d like to battle a giant neon samurai squid surfing on a paint-roller? Your dreams will come true here—and may even slip into your nightmares.

Beyond those core components, there are also the endlessly customizable costumes and skill add-ons, a goofy little rhythm based mini-game to highlight Splatoon’s delightfully quirky score, and another mini-multiplayer game that lets local players (again each with their own console and copy of Splatoon 2) fight off waves of enemies. They all add to the whole. Splatoon 2 is yet another win for Nintendo and The Switch. It’s an addictive platform shooter with an intoxicatingly charming design and plenty of bells and whistles to keep the title humming in consoles for the rest of 2017 and beyond. The game likely won’t win over anyone who took an instant dislike to the original Splatoon; there are plenty of tweaks and upgrades, but Splatoon 2 follows a formula set by its predecessor. Fortunately, that formula is strong enough to carry this sequel and probably many more. Welcome to officially being a Nintendo franchise Splatoon and all of your Inklings. The way that this company operates, you’re going to be around for a damn long time. Sounds great to me.

Splatoon 2 delivers everything that made the original great and tosses in a few improvements for good measure. The Switch library just keeps getting better.
REVIEW SCORE
8.5
File Under: Nintendo, Nintendo Switch, Splatoon 2