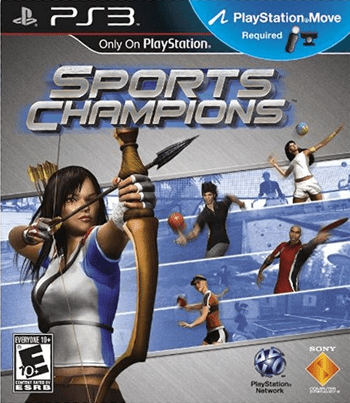 With the invasion of motion control systems to consoles other than the Wii, it was inevitable that both Sony and Microsoft were going to have similar offerings in order to provide something familiar to an audience already firmly embedded in the Nintendo Wii camp. Sony’s answer to Wii Sports is their own Sports Champions, and although the same basic concept is being executed, the results are surprisingly different.

It should also be noted that while not absolutely necessary, those games that have the option to use two controllers substantially benefit from the addition. Archery, for example, is much easier to play with two controllers, as, when using only one, the game reads all movement directly from the one controller held near your head as you “nock” an arrow into your virtual bow. The awkwardness of the motion, combined with Move’s accuracy, work against you as the sensitivity picks up the slightest tremor or shake, a situation greatly alleviated with a second controller acting as a bow and stabilizing your aim by averaging your steadiness between the two point The Gladiator and Vollyeball games similarly benefit by requiring fewer buttons presses to accomplish special moves as these duties are now assigned to motions between the two controllers, making these activities more intuitive.

Where Sports Champions falls a little short is in the limitation to only six mini-games, and a functional, but not highly comprehensive competitive structure. It manages to represent both casual and hardcore interests with the varying difficulty levels, but leans heavily towards the party game area with no online component or different modes outside of the Freeplay and tournament modes offered.

While Sports Champions is a little on the lean side of content, what it offers is a surprisingly accessible, yet deep level of gameplay that accommodates both families looking to spend time together, and frat house competitions where skill becomes a matter of pride. The events represented are substantial thanks to the “works as advertised” accuracy of the motion controller Sports Champions is an ideal ambassador for Sony to use for their Move debut, but could stand to have more content and more comprehensive gameplay mode The lack of online multi-player is a glaring, missed opportunity that could have really set it apart from its competitors and will hopefully be addressed in a sequel.

Sports Champions is an ideal ambassador for Sony to use for their Move debut, but could stand to have more content and more comprehensive gameplay modes.
REVIEW SCORE
8
File Under: PlayStation, Sports